How to build inner strength and thrive under pressure.

The star of Channel 4's Who Dares Wins. I must admit I am not familiar with the TV series, as I rarely watch television. I am also a trifle wary of self help books and courses, having been forced to endure various schemes that senior personnel hoisted upon us at great cost and intrusion into our busy schedules.
Team games, bonding, large banners and posters displaying an almost Communist era mantra to push forward and achieve more for our fellow worker ( and bosses); oddly in most cases, those of us on the ground floor seemed to be excluded from the bonding sessions at health resorts, hotels, and paintball sites, probably for good reason !

So I read this book with an open but perhaps slightly biased mind, a few people that flourished with those leadership courses, I found to be rather lacklustre in their own performance, and often just looking for a way to ingratiate themselves with the big earners, they also tended to blame others for their own failings. However this book is far more subtle than many self help books, in part because the author is honest enough to admit to his own failings and illness, and his ability to learn from them and move forward.

Many of the mantras practised by Military personnel cannot easily translate into civilian life, mainly because you have so many disparate characters, most of whom have their own interests at heart, and have never had to pull together to achieve things or to protect each other. I was lucky in that my apprenticeship into the world of work was surrounded by ex servicemen, who taught me decent values and humility and how to stick to the job and gain respect of your peers, something sadly lacking these days.


So Jason's book, is refreshingly different. It begins by taking you into a high risk operation with the SBS and describing honestly his emotions and fears, as they realise it has not gone as planned, then the need to make good their escape.

Jason then recalls his introduction to the Royal Marines; his Grandparents' service in the military and his own Father's service with the R.M. with the high expectations that it creates. His gradual learning curve and understanding why the training systems seem so harsh, to what is very evident is the team spirit, and how they bond and look after each other, something he misses in civilian life. Having to leave the SBS after suffering from Post Traumatic Stress, Jason makes the change into civilian life, but soon notices that the values he found so strong in the military are just not evident in the commercial world, causing him to change course, and find employment better suited to his skill-set, and in doing so forming a friendship and a bond with other ex colleagues.

Interestingly, the chapter about the TV series revealed a great deal more about his depth of understanding of his fellow man and women, without naming names he describes one contestant who is full of himself, puts himself forward, and could not understand it when he was kicked off for his arrogance, exactly the sort of idiot you often find in management , usually known by all and sundry as a total PIA. 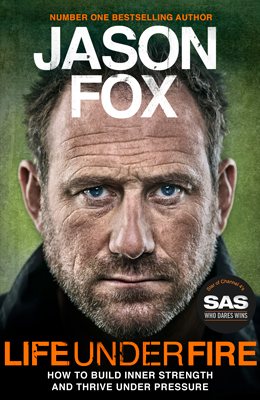 ​
The book is divided into chapters that explain the various problems and how you can deal with them. Jason breaks down the self help techniques into clear concise sections, using the military terms and methods. He then simplifies them, breaks them down, and by example explains clearly how they can translate to your own life. In all of them he uses his own experiences and feelings, and is very honest about them, making it easier for the reader to empathise.

I found this a very honestly written book, where the author opens his heart out and is candid about his mental suffering, the help he received and how he gradually overcame it and created a new career. I would think that any new or prospective members of the military could do worse than read and absorb the lessons in this book, and for many people struggling under the weight of pressure, or dealing with office politics and the usual narcissistic characters, then reading this will allay your fears, and give you the weapons you need to undermine the bullies, and achieve a great deal more.

A very honest and open book, written with great feeling and honesty (a very rare commodity these days).