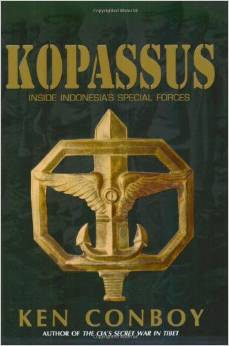 Ken Conboy is an American who has lived in Indonesia since 1992. He works in the security and risk area, and has a background in strategic relations. As such he is eminently suited to write the history of Kopassus, the Indonesian Special Forces.

Conboy obtained his information from researching Indonesian documents and publications, and also from interviews with the key participants, making the book a very dry but factual account of the formation of Kompassus as an airborne school in 1951, through to the early 1990s.

As such it has two principle interests to ARRSE readers. For the more professionally minded, it provides an overview of the establishment of a large Special Forces contingent from scratch. Conboy details how the Indonesians searched for and persuaded former Market Garden paratroopers and graduates of the British Airborne School in India, and established a parachute school in Bandung. He describes the logistical problems and the endless petty politics with a newly emerging elite force.

But the real fascination is that it provides in depth details of the opposition force during the Confrontation in Borneo.

For instance Conboy describes in great detail how in 1966 the Indonesians decided to slip over the border and capture one or more British prisoners for publicity reasons. They selected 300 volunteers, none below the rank of Corporal, and over four months of hard physical training whittled the team down to one hundred.

On the 2nd of February 1966 these men slipped over the border in unmarked clothing, with 300 rounds, an AK47 and ten days rations. The next day they were hit by British patrols. Conboys description of the ensuing cat and mouse game in the thick mountainous jungles of Borneo makes excellent reading. Eventually there were only 8 men trying desperately to get home. Only 6 made it, with the help of Chinese sympathisers. I doubt if the British troops involved ever knew what they were up against or the intentions of the enemy.

The book covers many other operations, mainly internal political deployments in places like East Timor as the Portuguese pulled out, and West Papua during its attempts at independence.

There is also part of the story of the “year of living dangerously” when Suharto overthrew Sukarno in a military coup. This part I found hard to follow even with a good understanding of the situation. Generals changing sides overnight, troops deployed without clear command, and multiple lower level players make this section somewhat confusing.

Kopassus is a very specialised book. If you were heavily involved in fighting them, or if you are about to train with them, then its worth reading.

Appreciate the heads-up on this as it looks fascinating.
If this period of Indo history is of interest then you may be interested in the extraordinary doco The Act of Killing.
The Dogs bark, but the Caravan moves on...

I haven't seen that, I will try to get hold of it.

Anyone who did fight in the confrontation and wants to read the chapter, I will scan the relevant pages and email them if required.

A man deserves to know who he fought against and what happened to them.

PM sent
The Dogs bark, but the Caravan moves on...

Former PARAs helping an enemy of UK?...maybe, just maybe, those British Patrols waiting on 3/2/66 were tipped off?