Moderator
A man attending an illegal cockfight in California died after being stabbed in the leg by one of the birds, officials have said.

The cock had a knife attached to its limb to take part in the gambling fight in Tulare County, central California.

Jose Luis Ochoa, 35, was declared dead in hospital where he arrived some two hours after being injured.

The coroner's report said he had suffered an accidental "sharp force injury" to his right calf.

It was not immediately clear if a delay in seeking medical attention was a factor in the death.

"I have never seen this type of incident," Sgt Martin King, who had worked in the sheriff's department for more than two decades, told the Bakersfield Californian on Sunday, when the incident happened.

Other dead roosters and materials suggesting cockfighting were found at the location, reports said, but no arrests were made.

Mr Ochoa, reportedly a regular participant in organised cockfights, had already been fined for owning or training an animal for fighting, according to court records cited by the newspaper.

Though cockfighting is illegal in the US, California is a popular destination state for people involved in the sport as raising the gamecocks, organising matches and attending fights as a spectator are all classified as misdemeanours on the first offence, rather than more serious criminal offences in the state.
BBC News - Man stabbed to death by cockfighting bird
I write down everything I want to remember. That way, instead of spending a lot of time trying to remember what it is I wrote down, I spend the time looking for the paper I wrote it down on.
W

Perhaps the chickens can teach these ducks a few tricks.

Moderator
A ducks & chickens private army? Now there's a thought.
Wonder if they would be interested in going elsewhere.
Someone could then design Osprey for chickens & a different shape for ducks.
I write down everything I want to remember. That way, instead of spending a lot of time trying to remember what it is I wrote down, I spend the time looking for the paper I wrote it down on.
W

What fowl deeds could we get them to perpetrate?

Wouldn't Osprey's just sort out the chickens and ducks?
CENT 05ZR70.Last seen at Marchwood, (by Nobby) Heading for Israel.
You may, if you wish, call me Jerry. Archduke Charles said it is my name. I dunno, I think he's a twat.

30 minutes and no knob gags.

I'm stunned
Steven Seagull is a rotten, internet bully, a seventh generation ****, he was born in a state of misery, half-cooked with a mean streak a mile wide. Over the years he has developed a passion for human oddities, presdigitation, tattooing and torture.

Whatever next? A chicken pulls a knife and stabs a guy and croaks him. That 's what you get when you try to train a bird in the art of fighting. The first thing you know he gets ideas. 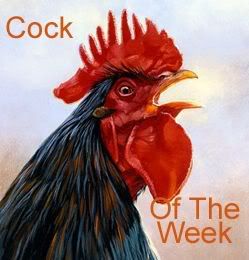 I thought it was about a lezza on the rampage.
Xylitol kills dogs, remember Eddie - http://www.facebook.com/The.Eddy.Project
&#8203;

Markintime said:
I hoped it was about a lezza on the rampage.
Click to expand...

..............is what you meant?
Do not lie to me. I may appear to be a potbellied, balding, middle-aged, dimwitted has-been. But on issues relating to my daughter, I am the all-knowing, merciless god of your universe. If I ask you where you are going and with whom, you have one chance to tell me the truth, the whole truth and nothing but the truth. I have a shotgun, a shovel, and five acres behind the house. Do not trifle with me.

eodmatt said:
Well at least the cock had the balls to stab the **** without crowing about it afterwards.
Click to expand...

JJH would be laughing like a drain over this. All together now...YouTube - Cows with guns

S
Death Sentence and the King