Italy is not a brothel

It would seem that Italian women are revolting

Der Spiegel said:
'Italy is Not a Brothel'

By Fiona Ehlers in Rome


Women, once the most loyal fans of Italian Prime Minister Silvio Berlusconi, are rising up against him. Tens of thousands demonstrated over the weekend against his sex scandals. But their anger won't be enough to bring down the controversial leader.
Some 220 years ago, Johann Wolfgang Goethe was having the time of his life. He traveled to Rome incognito and savored earth's delights to the full, literary historians say, enjoying wine, women and lively discourse. It may be that he had sex for the first time in the eternal city.


If he had been on Piazza del Popolo square, less than a hundred meters from his house in the Via del Corso 18, on Sunday afternoon, he wouldn't have believed his eyes. Once again, the Italians were debating the grand issues of sex, the might of men and morals, but this time they were speechless. Tens of thousands of women stood in the early spring sunshine and observed a minute's silence for the dignity of their sex. Then someone shouted from a stage: "Se non ora, quando?" If not now, when? It was the motto of the afternoon. The demonstrators punched the air and shouted "Now! Down with Berlusconi, it's enough." Then they played Patti Smith's song "Power to the People," waved their banners and danced.
At least 30,000 people gathered on the Piazza del Popolo. It was one of the biggest women's demonstrations in years. Similar protests took place at the same time in 230 Italian cities, in front of Milan's Duomo cathedral, in Venice, Florence, on village squares in the south. The organizers said more than 1 million Italians took to the streets. There were even demonstrations abroad, in Tokyo, Brussels, London and Paris. The pent-up anger is palpable. Women -- once the most loyal supporters of Italian Prime Minister Silvio Berlusconi -- are screaming "Ora basta!" They've had enough.
Sick of Being the Butt of Male Jokes
They are rising up against what they regard as a hopelessly outdated, 1950s portrayal of women in the media and in politics these days: that women are pretty and docile and that there place is in the home, in charge of "la famiglia." They want their dignity back and believe Berlusconi has crossed a line. They are demonstrating because their prime minister threw "bunga bunga" sex parties, is alleged to have had an affair with an underage Moroccan women named Ruby and because the whole world is laughing at a pitiful Italy that can't get to grips with its problems -- runaway public debt, youth unemployment, the influx of migrants. "Italy is not a brothel!" they are shouting. "More bread, less games!" It sounds as if women are really going on the barricades, but will it do any good?
"I'm not here to criticize porno parties," says one former member of Berlusconi's party. "I criticize the political class that turns such parties into systems of rule. We want to be protagonists, not the butt of male jokes the premier tells in his villa." The female leader of the biggest trade union group says: "We are extras in an endless soap opera." A nun who looks after African prostitutes in Turin says women have become a commodity, to be used and discarded.
The demonstrators then read out statistics that show Italy as a developing country in terms of female emancipation. Ninety-percent of Italian women have a university degree, but fewer than half have a job. "We work harder than the men, we are paid less and have fewer political positions than anywhere else in Europe," says one speaker.
The Same Old Madhouse
They complain about discrimination in the workplace, and about getting fired when they're pregnant. "One of Angela Merkel's first acts in office was to increase the number of kindergarten places," says one activist. "And what has Berlusconi done? He advises our daughters to get themselves a rich husband. What kind of country are we living in?"
The demonstrations are good news. But they don't change the fact that Berlusconi is far from fighting his last battle, contrary to claims in the Anglo-Saxon media. Silvio Berlusconi isn't finished -- that too became evident this weekend. Even before the demonstrations took place, he was ridiculing them and railing against his supposedly puritanical, humorless critics.
There were pro-Berlusconi demonstrations, too, of course. And Berlusconi naturally portrayed himself as the victim of a judicial system that, he said, was resorting to the same methods as the Stasi snoops in communist East Germany. Now he is even planning to take the case before the European Court of Human Rights because his right to privacy has been breached, says his foreign minister. It's the same old madhouse. But is this a revolution?
The protest march by Italian women was an attempt to restore a little decency and sobriety, it's part of fight against superficiality, egoism and the aggressive mood in the country. It is bitterly necessary. But it would be ridiculous to compare the protests to the Egyptian revolution, as some banners in Rome suggested. One read: "First Mubarak, now Silvio!"


The fact that Berlusconi got Ruby out of police detention by claiming she was Hosni Mubarak's niece could land him in court for abuse of power and is the only link to Egypt. Berlusconi, after all, was democratically elected, for the third time in 16 years. He won't be toppled by demonstrations or by judges who now plan to put him on trial. He will only be defeated at the ballot box -- if the Italians actually want to get rid of him. But at this point, what alternative is there to him? Even the protests against Silvio Berlusconi are completely fixated on him personally -- as usual, everything just revolves around him. No one seems to be looking further ahead -- that's the bad news from Italy. When will the paralyzed opposition finally be able to field a counter-Berlusconi capable of ending his rule?
Whenever that does happen -- in an early election in May if the vote is brought forward, or in two years at the end of his term -- the Italians, and not just the Italians, have had enough of him.
Click to expand...

Well, thats Italy of my holiday list, anyone know of a cheap hotel near palace barracks?
I've only ever been wrong once and thats when I thought I was wrong but I was mistaken.

Is it italian for 'gigga gig' johnny?

According to my Italian sources, bunga bunga involves buggering women. Allegedly Gadaffi introduced Berlusconi to the practice as a way to relax.

Personally, I don't find sex relaxing. Perhaps I'm going about things the wrong way. Which brings us back on topic. He would have been better to take an aspirin and go to bed early more often.

Two 'brothel' threads on the same day!
''God wanted to be a Sapper-Lo,and it was done!''
W

rallyman1978 said:
So they like sex but not bunga bunga.... WTF is bunga bunga


Bunga bunga is Italian for "I'll give you a very large cheque and you pretend to like me when you sleep with me..."

beufighter said:
Is it italian for 'gigga gig' johnny?
Click to expand...


Is that anything like `jiggy jiggy` by any chance? Forigien confuses me.

trowel said:
Is that anything like `jiggy jiggy` by any chance? Forigien confuses me.
Click to expand...

You're not doing too well with English, either!
retread2

RIP
The phrase "bunga bunga" has become inextricably linked with the private life of Italy's Silvio Berlusconi, and for those who have puzzled over its origins an intriguing new explanation of its meaning has been offered.

The comical-sounding phrase made its first appearance back in October, when 17-year-old Moroccan belly dancer Karima El Mahroug - who calls herself Ruby - said she had attended "bunga bunga" parties with other women at Mr Berlusconi's villa in Milan.
Italian newspapers immediately scrambled to find out its origins.

The finger of blame was initially laid upon Mr Berlusconi's friend Col Muammar Gaddafi, with allegations of parties hosted by the Libyan leader involving "harems" of young Western women.

Then stories circulated claiming the phrase owed its origins to a bawdy joke, which Mr Berlusconi's detractors claimed was one of his favourites.

Then this week Sabina Began, German actress and friend of the Italian prime minister, told Sky Italia that she herself was bunga bunga. "'Bunga bunga' is simply my nickname," the 36-year-old said.

The phrase "'Bunga bunga' also has a UK services connection - the infamous Dreadnought hoax which was dreamed up by aristocratic joker Horace de Vere Cole, who contacted the British Admiralty pretending to be the Emperor of Abyssinia.

He informed officials that he wished to inspect the Home Fleet while on a forthcoming visit to Britain. After enlisting some friends - artists from the Bloomsbury group, including writer Virginia Woolf - to masquerade as his entourage, he turned up at the navy's state-of-the-art ship, the Dreadnought.

Officials, taken in by the dark stage make-up, false beards and oriental regalia, treated the group to an official civic reception. 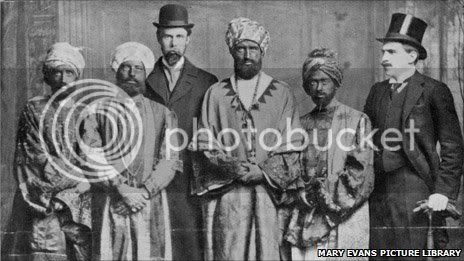 They were reported to have cried "Bunga, bunga!" while marvelling at the ship. An account of the visit plus a picture were sent to the Daily Mail newspaper - probably by Cole himself.

Virginia Woolf said later that when the real Emperor of Abyssinia arrived in London weeks later, wherever he went, ''the street boys ran after him calling out bunga, bunga!"

When I went on board a Dreadnought ship
I looked like a costermonger;
They said I was an Abyssinian prince
'Cos I shouted 'Bunga Bunga!'
Source: The Sultan of Zanzibar: The Bizarre World and Spectacular Hoaxes of Horace de Vere Cole, Martyn Downer

(The term reappeared at the end of World War I, after HMS Dreadnought sank a German submarine. According to retired Royal Navy captain Jack Broome - in his book Make Another Signal - the congratulatory telegram read: "BUNGA BUNGA".)
BBC = Brussels' Broadcasting Corporation​

I'm very cross with Italian prosecutors. Why? Because they are accusing Mr. Tony Blair's very best friend of naughtiness! This is outrageous!

If Mr.Tony Blair had any idea that his very best friend was being naughty, he would have said something.

Makes you proud to be British!

Are you disl, dysl, did you mean degenerates?
Sentence compositions wierd too.
CENT 05ZR70.Last seen at Marchwood, (by Nobby) Heading for Israel.
You may, if you wish, call me Jerry. Archduke Charles said it is my name. I dunno, I think he's a twat.

cent05zr70 said:
Are you disl, dysl, did you mean degenerates?
Sentence compositions wierd too.
Click to expand...

Well, I read that as a clever pun on denigrates / de-negro-ates after Joe Civvies c'n'p from al-Beeb. I may be being unreasonably merciful in my lack of pedantry. YMWV.
[Insert="something profound yet amusing"]here[/Insert]

China (not a great bunch of blokes) and the Uighur.

Importing Gold from Italy to the UK
2 3

Why are some countries so much more corrupt than others?
2 3 4