It’s The End of the World. But What Are We Really Afraid Of?

It’s the end of the world…….. How many times have you heard those words in your life in relation to a book a film, series or even a game? More than a few I’d wager. It turns out that as a race we are obsessed with our own demise. It is this aspect of our psyche that Professor Adam Roberts chooses to explore in this book.

I have a friend who writes post apocalyptic fiction and earns a very respectable living doing so, when I explained that I would be reviewing this book he stated “It’s going to be existential or boring….”. I joked that it “could be both”.

It turns out that I was wrong, by its very nature the book is a little existential but the more that I read of it the more I realised that it needed to be a little existential just to explore this corner of the human condition. But boring? Not in anyway shape or form. Professor Roberts uses humour and a very lively writing style punctuated with quotes and references to bring this subject to life (if you will forgive the pun…) 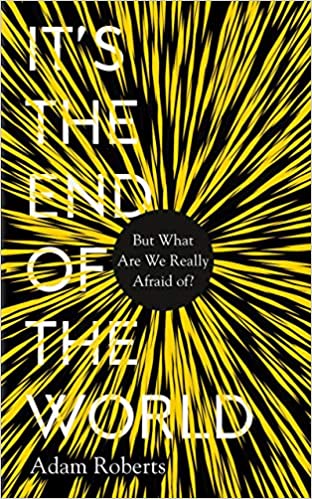 After setting the scene of our endless fascination with our own (and everyone else’s) impending doom, he takes each individual style of demise and examines it chapter by chapter. Religious doomsday, the Zombie apocalypse, world ending plagues (particularly relevant currently), Nuclear fire opposite the death of the sun, topped off with climate disaster, and combinations of all together.

Each is examined in turn, their depictions in popular culture, religious text or historic context. I found the book fascinating and in turn it has given me quite an extensive reading and watching list to catch-up on (not Shaun of the Dead obviously I’m already into double figures with that one….). His depth of knowledge on the subject illuminates this dark corner with some rather comforting nuggets of fact. Did you know for example that Professor Costas Efthimiou of the University Of Central Florida calculated in 2008 that “if one vampire had bitten one victim each month in 1600 thereby turning them into a vampire, the law of exponentiality means that it would have taken just two and a half years for the entire original human population to become vampires, with nobody left to feed on. Imagine a greedier vampire….” And well you can imagine the results. So we can cross off vampires……. Zombies though, those buggers will nail you.

Another comfort in the current climate is that he examines statistically the transmission of various plagues especially the Spanish Flu pandemic of 1918-19 and points out that while individual deaths due to disease are indeed tragic, as a percentage of the worlds population these events have barely scratched the surface. So we can scratch that one off too. It was particularly interesting to me when the author explains the human need to assign “agency” to these viruses that we cannot see, hence its “the Chinese” or “Bill Gates”………

I won’t steal anymore of the authors thunder, if you watched Night of the Living Dead, Terminator, Contagion, played Resident Evil, read the Bible (unlikely on this site I know…), Mad Max… or any of the thousands of stories involving our ultimate end. Read this book, it’ll explain why you enjoyed them!

Lenny Bruce is not afraid.

Great band!
And what should they know of England who only England know?

The Changing of the Guard by Simon Akam
4 5 6