A really bad smell hits the olfactory nerves like a pair of billiard balls in the face and will cause a human to flee even more than from tear gas.

And few smells are worse than that of the skunk, which after long last the Israelis have cottoned on to!

After being drenched once by this putrid 'skunk cannon', an Arab rioter is going to be mightily deterred. And his suffering 'innocent' neighbors aren't likely to let him riot again in a hurry once their homes have been stunk out!

The Brits could really have done with this weapong during "The Troubles"! 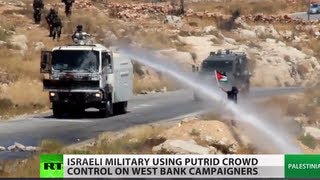 Hats off to the Israelis for finding a way to make Arabs smell worse than they do already.

Wonder where they got the idea from;

Haven't had an accident in years. See a lot in my rear view mirror though.

Durham version. How to Deal With City Hall - YouTube

BONNACON said:
Wonder where they got the idea from;

Damn stylish
NULL
You must log in or register to reply here.