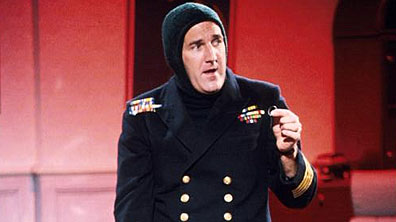 riksavage said:
Underwater knife fighting, Stirling SMGs, ‘that’ rifle (version of). What’s not to like!

Maurice Roeves is the helicopter pilot ISTR.
I wants to finish my little bit and I wants to get home for my tea.

endure said:
On regular deep sea merch ships you have the OM in charge and 3 mates doing watches as well as the CE in charge of the pit and 3 engs doing watches although modern ships are usually UMS so the engs do daywork.

They're different to the kind of ships you work on.
Click to expand...

I was rather hoping the Canoe Club would turn it into a floating collander. Instead we've got negative Trip Advisor reviews to look forward to.
Fred Astaire ate my hamper.

NSP said:
"Just surprised they initially deployed the Police, then waited so long, before engaging the #SBS & other military assets "

Really? My understanding as a never-served civvy and non-journalist but someone who can actually read is that if it is inside the 12mile limit it is subject to domestic law, is a police matter and remains so until the constabulary Gold commander decides it is beyond the police and formally releases control to the attending military unit (which in English, in this case, means the SBS) - or is ordered to so do by Downing Street.

In other words, the police have operational control and jurisdiction until choosing or ordered to hand control to the military.
Click to expand...

That was always the case. However it may have been modified since the Beslam School siege in Russia. Prior to that most terrorist incidents were sieges with the bad guys holding hostages and setting out their demands with the police negiotiating, with the military standing bye. If the baddies offed a hostage, the police handed over to the military and the goodies went in and offed the baddies. The Iranian Embassy siege was the perfect example.

After Beslam most terrorist incident have been jihadis on suicide missions hoping to kill as many infidels as possible before the goodies arrive and send them to paradise with their 72 virgin camels. The Westgate Mall incident in Nairobi in 2013 or the Bataclan in Paris in 2015. Since this time Police firearms teams have been beefed up as they are likely to be first on scene until the military arrive on scene. If Them happen to be around at the time and arrive on scene before, or at the same time as the police, I doubt if they will be farting around getting official handover from senior police officers.

NSP said:
I shouldn't imagine that it is the RAF.
Click to expand...

You would be very surprised, perhaps you will regal us mere mortals of your military service?
@Simmerit was @simmer but his wife told him to delete his account.
https://www.arrse.co.uk/community/threads/gems-of-the-day-from-the-bbc.229572/page-72#post-6880061
https://www.arrse.co.uk/community/threads/gems-of-the-day-from-the-bbc.229572/page-74
P

"The case provoked widespread political controversy and was questioned by large sections of the media, causing widespread condemnation by many newspapers (most notably The Sun),[1] and the leaders of both the Labour Party and the Conservative Party. Prime Minister of the United Kingdom Tony Blair called the ruling "an abuse of common sense",[2] while the Conservative Party leader David Cameron pledged to reform British human rights legislation to prevent a recurrence of such situations.[3]"

And after fourteen years what did Cameron and every other politician do to reform British human rights legislation to prevent a recurrence of such situations - zilch.

One of the hijackers was found working as a cleaner at Heathrow two years later in 2008.

Fowzi Nejad the only surviving terrorist from the Iranian Embassy siege couldn't be deported after he completed his prison sentence due to his human rights would be jepardised if he was deported to Iran and he is now living in a council house in Peckham with all the benefits.

jarrod248 said:
They’ll go to court for the crimes they’ve committed. People don’t just get sent back when they’re so naughty.
Click to expand...

A pity Liberia (the ship's registration) won't apply for extradition...

Any hope that the ship's owners will now get a bill for this? Seeing as they've just been saved the cost of a few days driving round in circles while it might otherwise have been resolved in less kinetic fashion.
F

slipperman said:
I reckon they will be bolstering the ranks of the next #BLM Demonstration. Any ideas on the ratio of white to black within the ranks of those SBS types who unfairly overpowered our ‘heroes’?

And nicely done I thought
Who me?
Real stupidity beats artificial intelligence every time!

Good result, and a most professional job carried out by the respective members of HM Armed Forces.

Ritch said:
To be honest, Matt Baker deserves a double tap in the chest.
Click to expand...

No he doesn't. He deserves a size 10 door key applied until sleepy go bye bye. 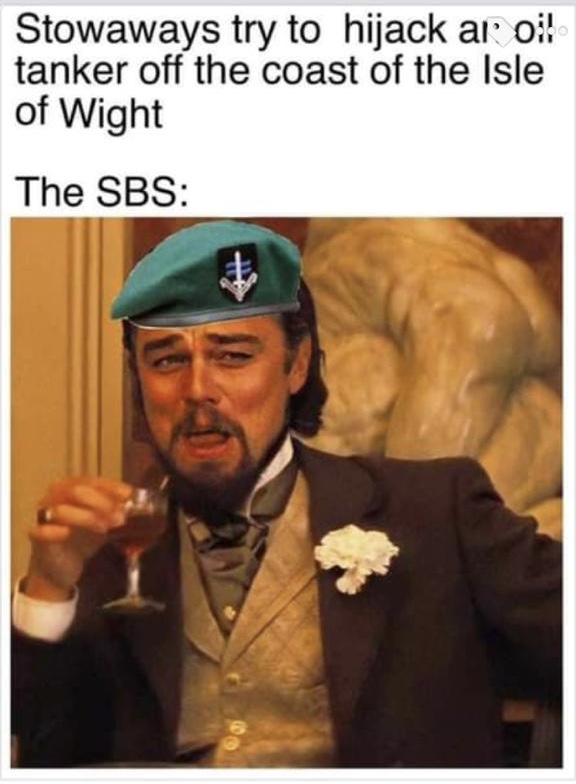 is stupidity a right or a privilege? 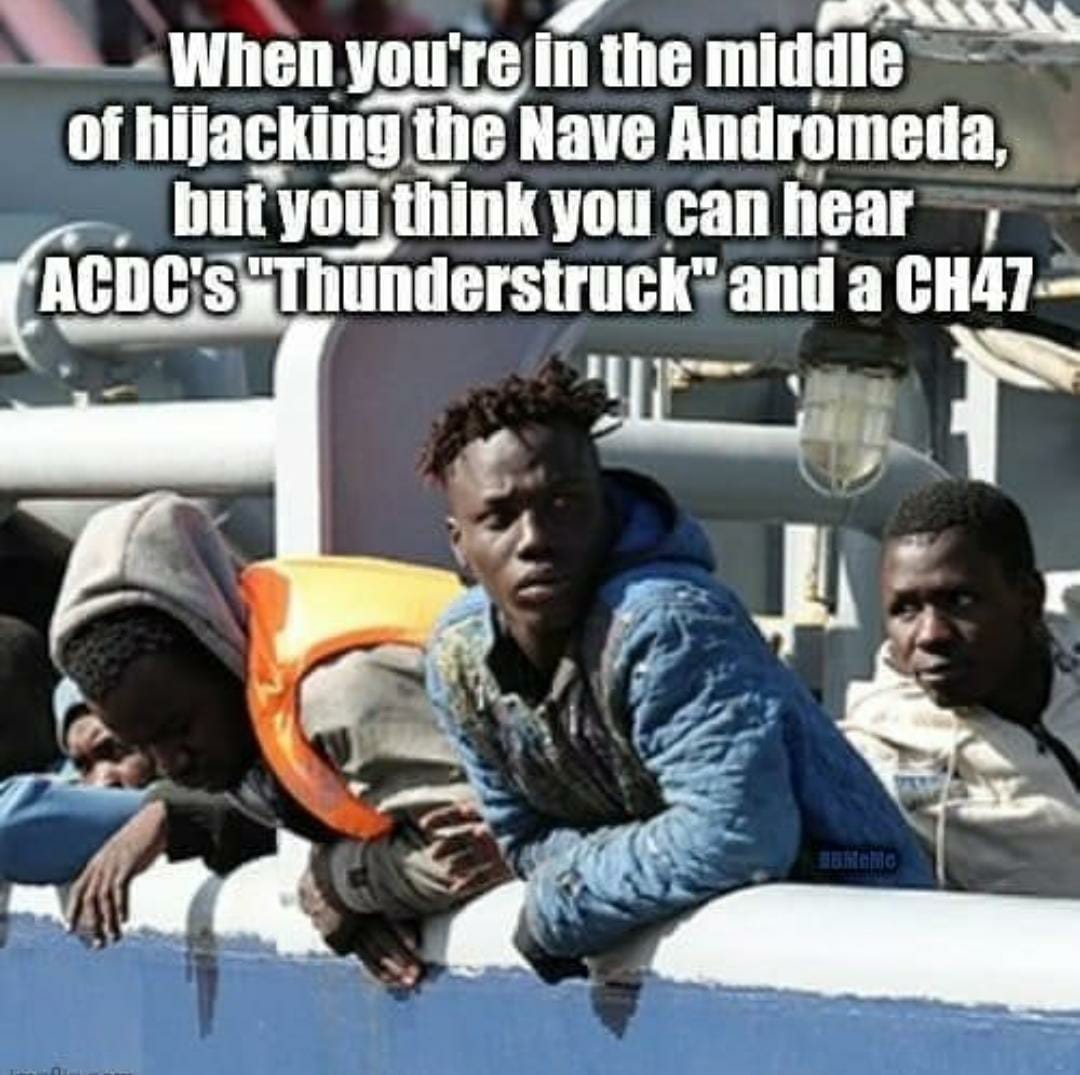 Is there any particular reason for the insistence by the ship's owners that the vessel wasn't hijacked or indeed the media's reluctance to describe the incident as such? Are there insurance or other issues involved or is it simply a matter of semantics?

So, definitely not another pissed up tanker captain having DTs then?
This definition tells you all you need to know about 'PC'
PC, aka, Political Correctness, is a doctrine, fostered by a delusional, illogical minority (Liberals/Socialists) and promoted by the mainstream media, which holds forth the proposition that it is possible to pick up faeces by the clean end. 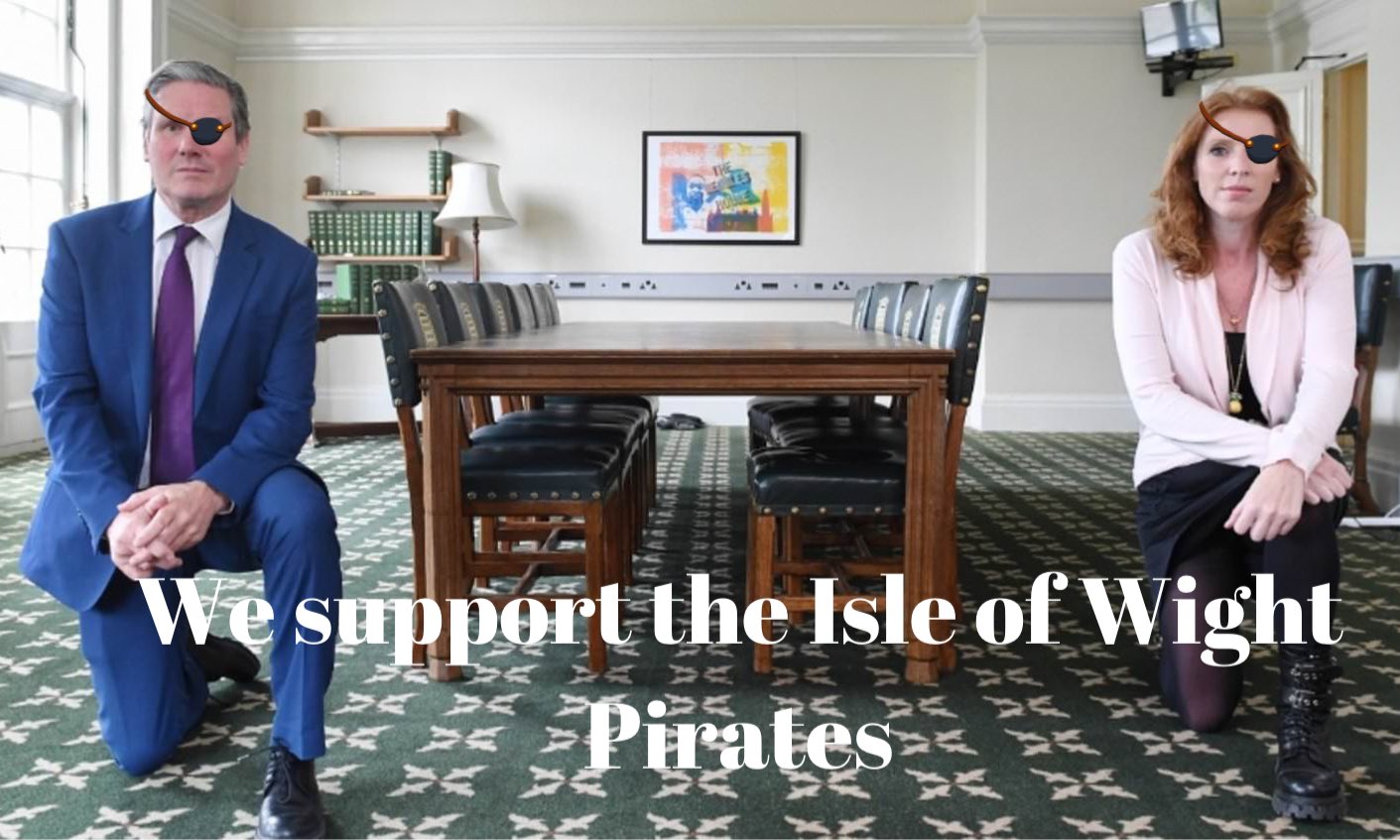 Last edited: 26 Oct 2020
This definition tells you all you need to know about 'PC'
PC, aka, Political Correctness, is a doctrine, fostered by a delusional, illogical minority (Liberals/Socialists) and promoted by the mainstream media, which holds forth the proposition that it is possible to pick up faeces by the clean end.