This is an interesting book - in many ways, to quote from ‘Note from the Editor’:- “The words you are about to read are almost exactly those of R K Doughty. … He dictated these words in 1979 to his wife Elanore who took them in shorthand. His daughter transcribed the shorthand notes to approximately what is presented here.” And “Since this manuscript is dated 1979, more than three decades after the war, it must have been composed with the aid of extensive diary notes.”

I would add the unwritten text that it is written with an extensive amount of hindsight, there are opinions – lots of opinions, of commanders, policies and strategies that the author wouldn’t have possibly been able to form at the time, either due to not being privy to information or not being sufficiently behind the front to take a wider view.

A great deal of the book describes the authors time in Italy, particularly the area around Cassino, again, the narrative is of a wider view than the author could have experienced. I have read many books on the battles leading up to the taking of Cassino, from both sides and not all the accounts tally exactly as to be expected, however, some of Doughty’s memories seem to be tinted by the passage of time more than say, Majdalany’s.

Despite the subtitle, the book also covers the authors time in North Africa – an area of the world I know well - the descriptions of Morocco and Algeria, their environment, customs and culture are very familiar to me, showing some things hardly change at all and the author has an eye for detail and able to articulate it well. The Prologue mentions that six chapters detailing Doughty’s life at university up until the time of his call-up in 1942, although the book is quite lengthy at just over 290 pages and thirty-three chapters, I would have liked to have at least had more background to his training which is alluded to in the early parts of the book.

One of the things about the book that goes against the ‘received history’ of the Second World War is the American attitude towards prisoners of war, this is mentioned several times and seems to be something that hardens as the war progresses, there are several passages where Doughty describes giving advice or protective custody to PW’s as (it seems) the average GI wasn’t averse to taking restorative justice. There are few references to other Allied troops, when there is, they are generally positive, noting that the Americans have little to no experience of modern warfare the author makes a point of mentioning some (probably lifesaving) field skills taught to him by a British officer and how he took time to disseminate to his own subordinates.

The book is also a good encapsulation of American perceptions and attitudes towards a war many considered not to be ‘theirs’ – not just during the war but in the years after, it also highlights the disconnect between American units, Commanders and Generals, no doubt some of it felt keenly at the time but as mentioned previously, I can’t help feel there is a good amount of hindsight introduced in the intervening years so as to become ‘received memories’. 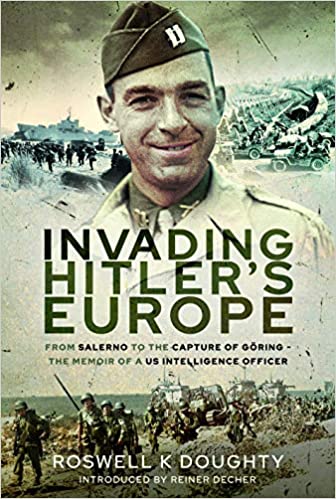 Is it a good read? Yes, it has an easy pace to it, despite the opinions and hindsight, it gives a fascinating insight into American views during the Second World War and after it, many will also see flaws in American Military Doctrine of the time and find themselves mentally ‘tutting’ at some passages. Some parts of the book clearly grandstand American achievements and values – which isn’t a negative point, if you’re expecting a neutral, objective first-hand view from the ground, you won’t get it from this book, or many others. Would I recommend it? Yes – just, marked down for grandstanding and too many opinions voiced (in my view) and despite hinting in the subtitle, the author wasn’t involved in the capture of Goring, but was in the area.

Published by Frontline books, there are some maps interspersed in the text and a few photographs, with references for further reading included to expand on particular campaigns and actions. Available on Amazon