My own particular interest in the PWRR began in 1970 when I found some photos of my uncle's in uniform. Several of them served with the Buffs (Royal East Kent Regiment) and I spent 12 months serving with 5 Queens (TA) at Broadstairs, Kent, Two other relatives of mine landed on the beaches of Normandy and fought through to Germany with 119 LAA BTY RA, which was formed from the 10th Battalion, the Buffs (Royal East Kent Regiment). 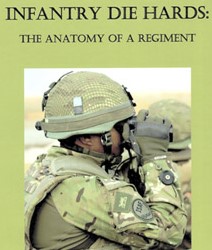 In 1959, the two infantry regiments of Surrey were amalgamated to form the Queen's Royal Surrey Regiment.

In 1961, the two infantry regiments of Kent were amalgamated to form The Queen's Own Buffs, The Royal Kent Regiment.

In 1966, The Queen's Regiment was formed from the infantry regiments of Surrey, Kent, Sussex and Middlesex.

In 1992, The Princess of Wales's Royal Regiment was formed following the amalgamation of the Queen's Regiment and the Royal Hampshire Regiment.

So begins an account of the various regiments that went on to form The PWRR. Much has been taken from actual written accounts from the battlefields, but also, a lot has been gleaned from eye-witness accounts, retold by those who "were there". Patrick Crowley, a former Regimental CO of The PWRR states that "this is not a straightforward history of a Regiment moving from year to year with each of the regiment's actions". He states " this is a series of major stories through the ages, highlighting the most significant of regimental tales".

The PWRR's story begins with the oldest battle honour in the British Army, Tangier 1662-1680; then moves onto the founding of the British Empire in 1759. This includes the story of the Infantry advancing, incredibly against Cavalry at the battle of Minden! Following that is an equally incredible tale of Lieutenant Latham of The Buffs; his bravery defending the Sovereign 's Colour at Albuhera would live in the annals of regimental history, to be retold time and again.

Bravery was not restricted to the Officers; Sergeant Bernard McCabe showed extraordinary gallantry in the first Sikh war and was commissioned for it. He then showed even more gallantry as a Captain with 31st of Foot during the siege of Sobraon during the Indian Mutiny. Had the Victoria Cross been awarded posthumously, he would have been a certainty to receive one.

Private Moyse is another "character" of the The Buffs. His "story" is that he and a Sergeant from the 44th East Essex Regiment were captured by Tartar soldiers and brought before General Tsan-Koo-Lin-Sin. It is alleged that Moyse refused to Kow-tow to the General and kept refusing despite being told he would be executed if he didn't how to the General. Moyse still refused and was subsequently executed. The accuracy of this story has never been verified

Other characters include Lieutenant Walter Tull, the first black infantry officer to serve in the British Army; Lance Corporal John Pennington Harman VC, storming an enemy Machine Gun post at Kohima and Private Johnson Beharry VC, risking his life for his comrades in Iraq; also, in the same action, Sergeant Christopher Broome received the Conspicuous Gallantry Cross for rescuing the unconscious Beharry while under fire.

Throughout it's five centuries of history, the former regiments and indeed the now present regiment have shown them to be tenacious fighters, hence their nickname, The Tigers. Crowley has written an extremely important work here and it is well worth a read. Anybody interested in stories of the twelve regiments that formed PWRR would be advised forward this book, I heartily recommend it. This is a weighty tome and needs a strong pair of arms to keep it aloft but it is packed with important information, facts and anecdotes. It also contains a number of photos, drawings and artworks. The reader may also be surprised at the various personalities from the world of screen and sport who have served with the PWRR or it's antecedents.

Not available on Amazon but available from the PWRR Regimental Shop
http://www.armytigers.com/sites/default/files/publications-files/inf_die_hards_marketing_flyer.pdf

Infantry Die-Hards: The Anatomy of a Regiment