Why's the bloke on the right wearing ladies shorts...?

I don't respect your opinion and I don't care if you're offended.

More to the point, how come he's got titties?
A fireman to be successful, must enter buildings; His whole success depends on his getting in and remaining there, and he must always carry his appliances with him, as without them he is of no use. James Braidwood (1800-1861)

BratMedic said:
More to the point, how come he's got titties?
Click to expand...

Middle-aged, let himself go and drinks too much, I guess.

I don't respect your opinion and I don't care if you're offended.

javaguzzisti said:
What nationality were these passengers?
Sounds very un German to me.
Click to expand...

Judging by their accents they were all German, or at least foreign nationals who have been living here for quite some time.
Power is in tearing human minds to pieces and putting them together again in new shapes of your own choosing.

mush_dad said:
Is the 'thing' in the shorts going for cameltoe of the year?
Click to expand...

I don't think that's a toe...
I don't respect your opinion and I don't care if you're offended.

BratMedic said:
I've looked it up in the manual of rules and laws, and it says that in the event of silence stops (for any reason other than 11/11/11) the Brookwood Necropolis exemption comes into force and play continues as normal.
Click to expand...

Mrs Trellis won't be havin' with that, you know....
"Justice tastes like hairy Bovril!" - The Righteous RTFQ

mush_dad said:
It's a big toe
Click to expand...

Not that big, really...
I don't respect your opinion and I don't care if you're offended.

Lardbeast said:
Mrs Trellis won't be havin' with that, you know....
Click to expand...

I assume that puts me in 'Nidd'.
A fireman to be successful, must enter buildings; His whole success depends on his getting in and remaining there, and he must always carry his appliances with him, as without them he is of no use. James Braidwood (1800-1861)
J

BratMedic said:
I assume that puts me in 'Nidd'.
Click to expand...

I'm not so sure, it didn't sound like a Northerly approach.
NULL

RCT(V) said:
WHY do you go around sniffing old "mattresses that you find by the side of the road" ?! .
Click to expand...

A) Everyone needs a hobby.
B) I drive most days with windows and sunroof open. Scumbags dump mattresses in the lanes around my home. You can smell those mattresses from 20ft away when driving past at 30mph.

Kit Reviewer
Book Reviewer
A sad consequence of tightening up recycling centres is more fly tipping , far cheaper to be easier at the centre
NULL

MoleBath said:
A sad consequence of tightening up recycling centres is more fly tipping , far cheaper to be easier at the centre
Click to expand...

Yesterday as I drove into work I found the country lane complete closed because some idiot had tipped about 2 tonnes of building waste completely filling the road. Selfish b*stard.

You did exactly the right thing. Unfortunately the creature you accosted was an outrageous @rse. I personally, enjoy pulling folks up for dropping litter, using bad language in the presence of ladies and being generally loutish. The only problem I have is stopping the red mist from descending. Apart from that it is a good sport that actually does good.
In order to provide balance, I particularly dislike oafs who dress up as SS soldiers. At militaria fares you can find me challenging these thugs - NF tats etc. I ask them why they dress like that, they sneer and try explain (using words of few syllables) that it is for edukation (sic) purposes. At this stage the red mist usually begins to creep in as I start to question them as to why they chose losers. Thankfully I only do this (thus far) when my huge sons are in attendance - so as yet I have not arrived in A&E.

If you are able to make the person feel better about themselves having been reprimanded and taking the necessary action so much the better - it is yet to happen with a faux SS-Hauptscharfuhrer. It's all about standards!

I like you Chimp!
There was Jones 09 who always felt the strong need to bang away at Jerrie's line, Evans 15, white faced and nervous but squared up, and did his duty, and my batman Williams 51, the most perfect gentleman that I have ever met. They are all gone now, my lovely boys! Pl Comd 2nd RWF Nov 1917.

madboffin said:
I used to take the train from Essex to Stockport often at one time. Those announcements were common at Euston and at Stockport. Once I got on the relief train at Euston and it ended up unable to enter Piccadilly because the track was frozen. We were left for hours on the train in sight of the station but with a guard constantly telling us to wait a "few more minutes." No heating, coldest night of the year. We didn't get into the station until around 4AM.

Train spotters told me recently this could never have happened because British Rail was infallible.

BTW, you didn't mention the smell. Those relief trains were damp and stank of mould, like those mattresses that you find by the side of the road.
Click to expand...

My swede's never been near enough to sniff one TBH
NS123

Some years ago I was on a suburban train wending its way through South London to Charing Cross, train was mostly empty.
Three ticket inspectors got on.

A Somali woman of about 50 , in traditional garb had no ticket, the train was at a station and the inspectors held the train while the situation was resolved.

We heard the whole sob story,
But I have no money , I come to this country as a refugee, I am poor, I flee war, why do you treat me so badly?

She was told that she would have to buy a ticket or get off, one of the inspectors went to put one of the woman's many huge shoplifter type bags on to the platform. A tug-o-war with even louder screaming and wailing ensued.

(Here comes the idiot on this train)

A 30 ish hipster media type in an expensive trendy suit and horned rimmed specs comes marching up the carriage. In a very well spoken imperious voice he says.
Look! I simply have to get into London NOW!
I have a very important meeting I absolutely CANNOT be late!
Here, I will pay her fare!

He thrusts a £20 note into the inspectors' faces.

In the end a ticket is issued.
Instantly the Somali turns a barrage of foul mouthed abuse onto the inspectors.
She spent the rest of the journey smugly laughing to herself and swaggered down the platform at Charing Cross.

In my if only moments, if I had known how it would unfold, if I had the time again, I would have grabbed one of the woman's bags and slung it out....

It takes the Navy three years to build a new ship (hah!) it will take 300 years to build a new tradition.
The Arrse site redesign can be blamed for all that is wrong with the world.
The internet: It's life Jim. but not as we know it.
There should be a West End Show - ARRSE The Musical.

Book Reviewer
RIP
Once upon a time I was in a train in Ceylon. Long carriage with a gangway down the middle between the seats. I couldn't help but overhear two policemen muttering at the far end. Mutter mutter mutter. "But that's bribery and corruption!" Mutter mutter mutter. "And besides, you might get caught!"
' .. the whole character of what Churchill called 'the island race' is being threatened without even the pretence of consultation with those involved.'
Norman Longmate, 'When we Won the War', 1977

wheel said:
I would take a plane as the roads in Peru a terrible.
Click to expand...

Not my bus, but a tourist bus crash yesterday. 8 dead. 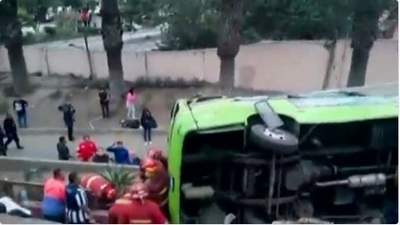 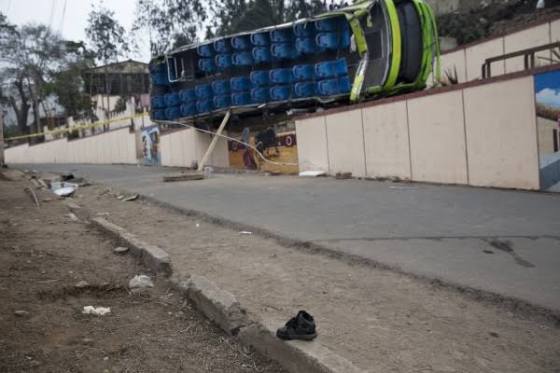 Probably speeding. Imagine being on the top deck as it failed to negotiate a bend and then rolled down a hill. But it was going up to a high point to look out over Lima.

A Wildcat in the wardrobe
2