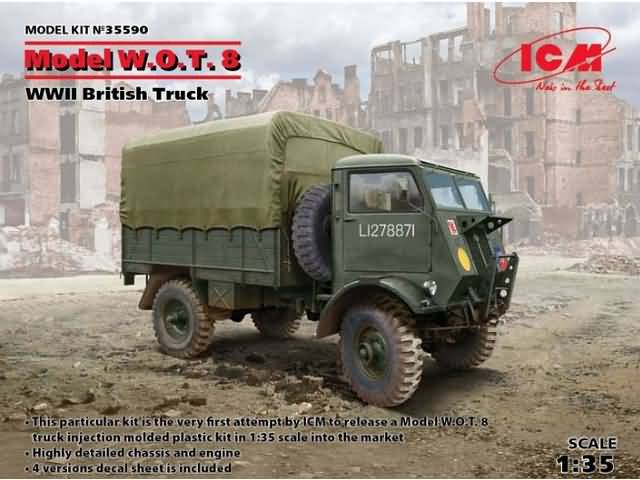 Made by Ford UK under the Fordson brand, the WOT 8 was the last of a long line of vehicles using similar nomenclature in service with the British Army. Introduced in 1941 there were approximately 2,500 built, seeing service in North Africa as a Gun Tractor, in Italy and in North-West Europe in a GS role, but also used with a variety of box-bodies for signals or mobile offices. The RAF used them for mobile airfield signalling and flight control offices. Its large fuel tank gave it a healthy range and a reasonable top speed thanks to the Ford V8 engine that put out 85hp, which wasn’t too shabby for vehicles in WWII. 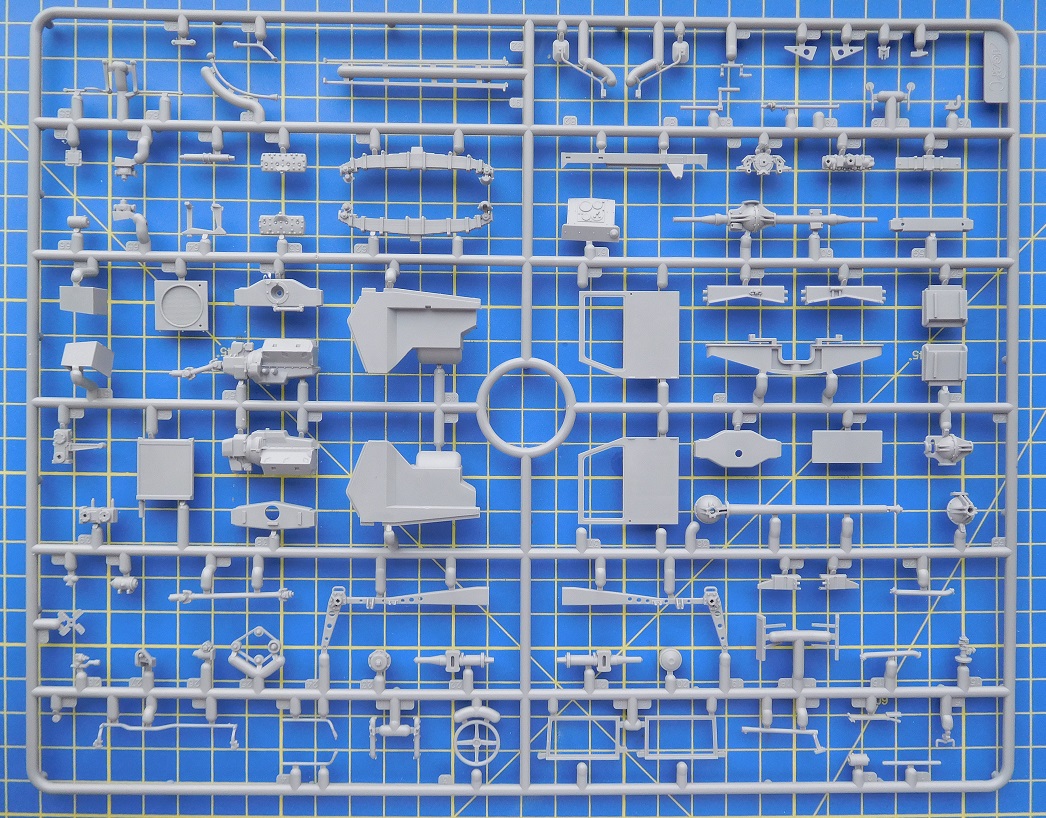 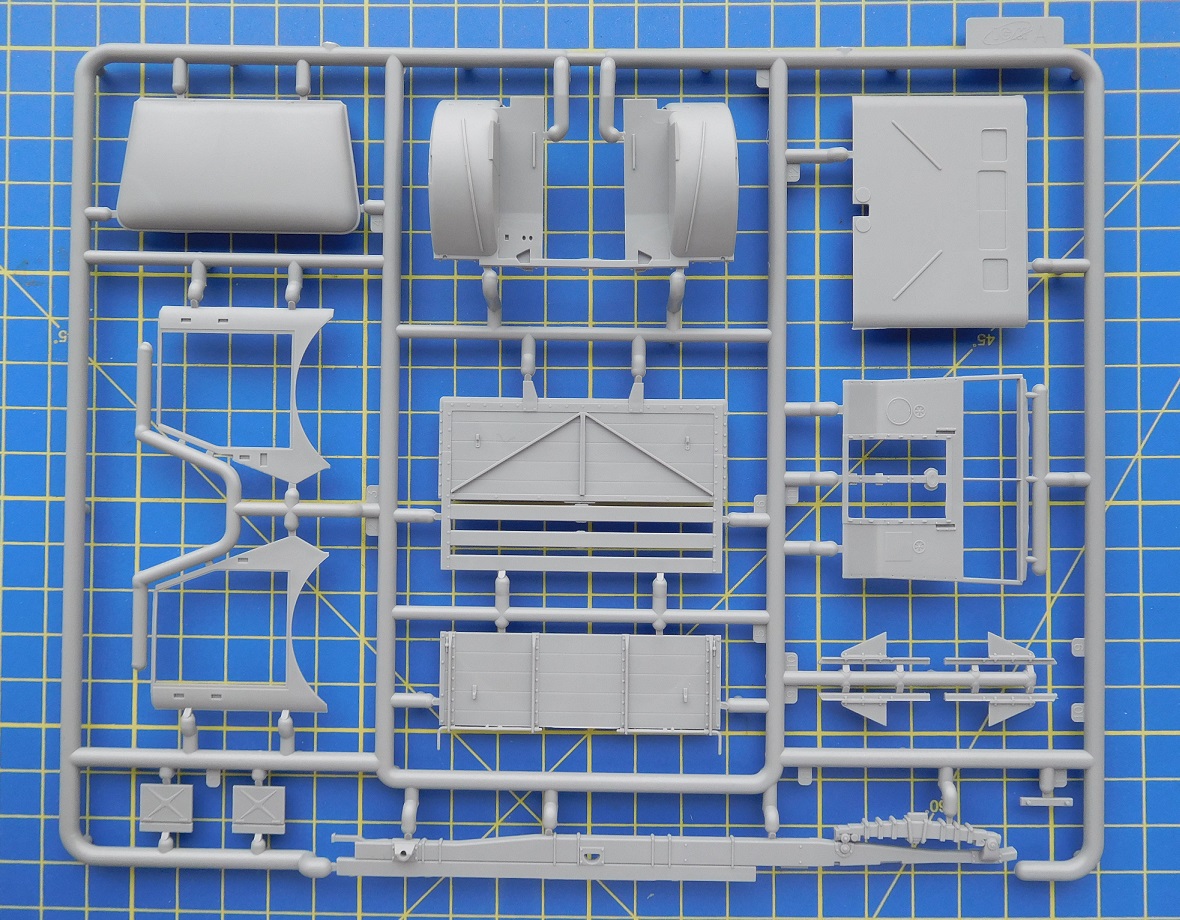 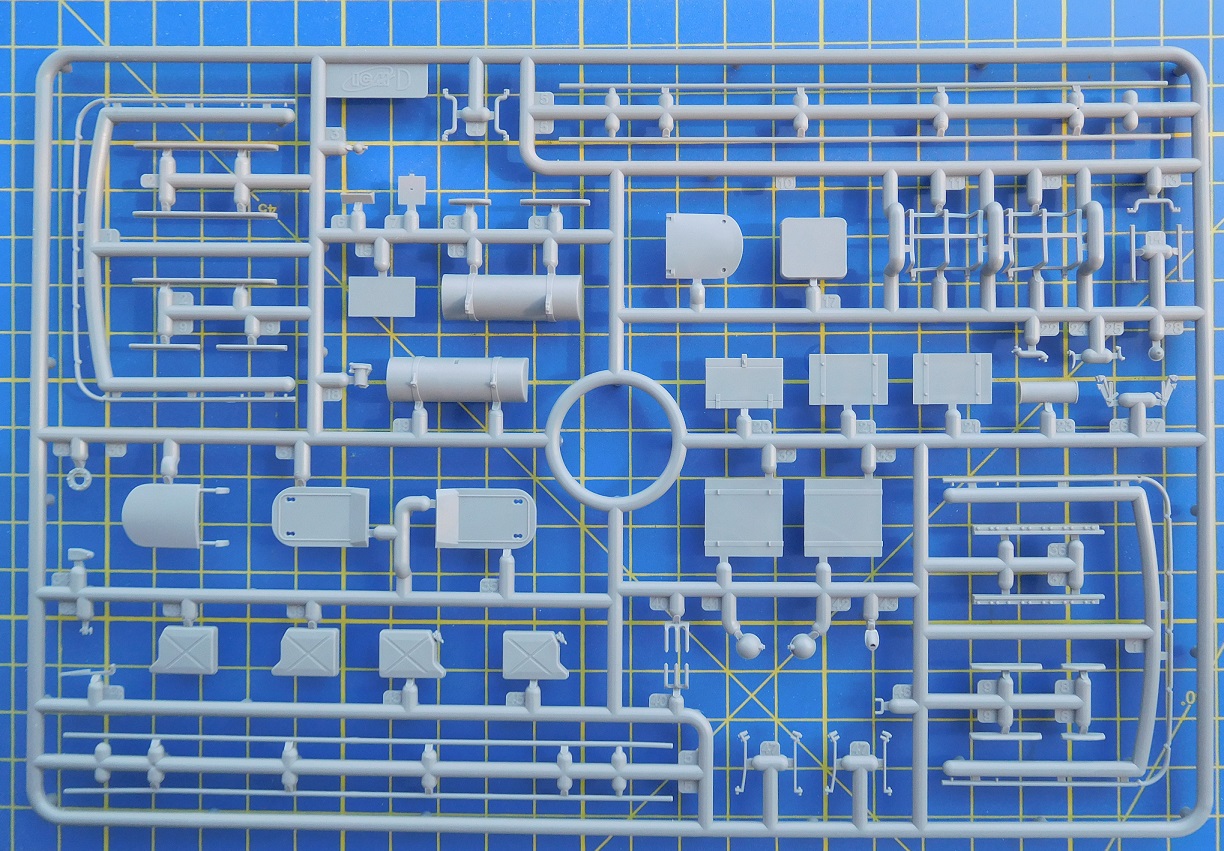 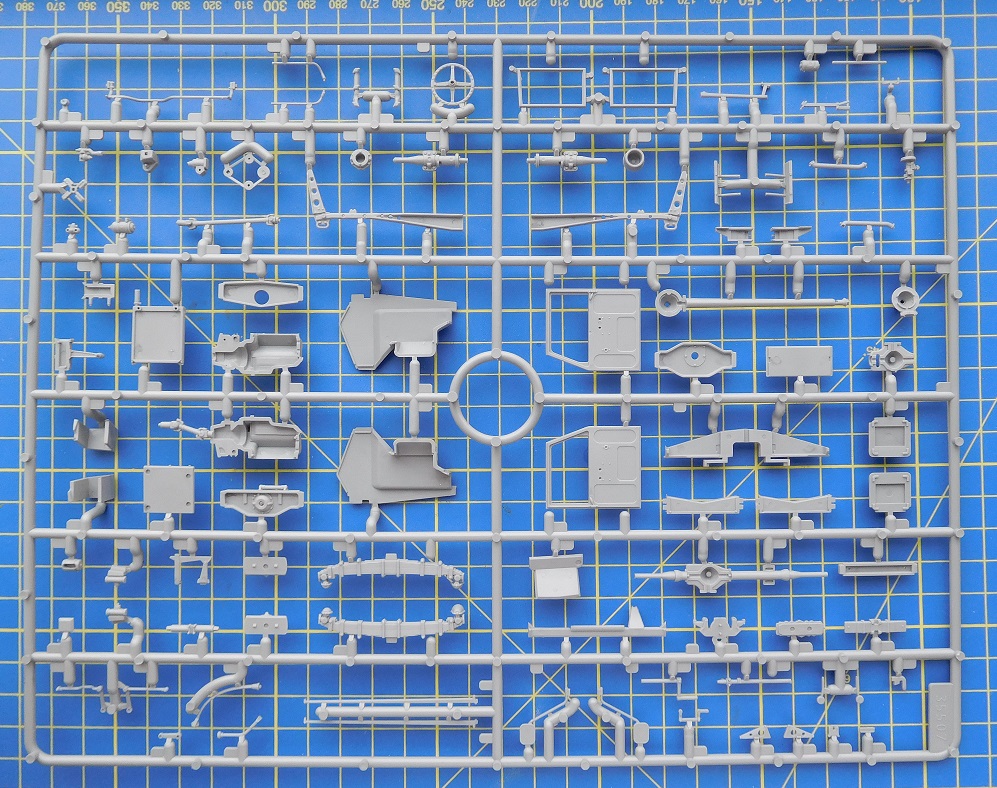 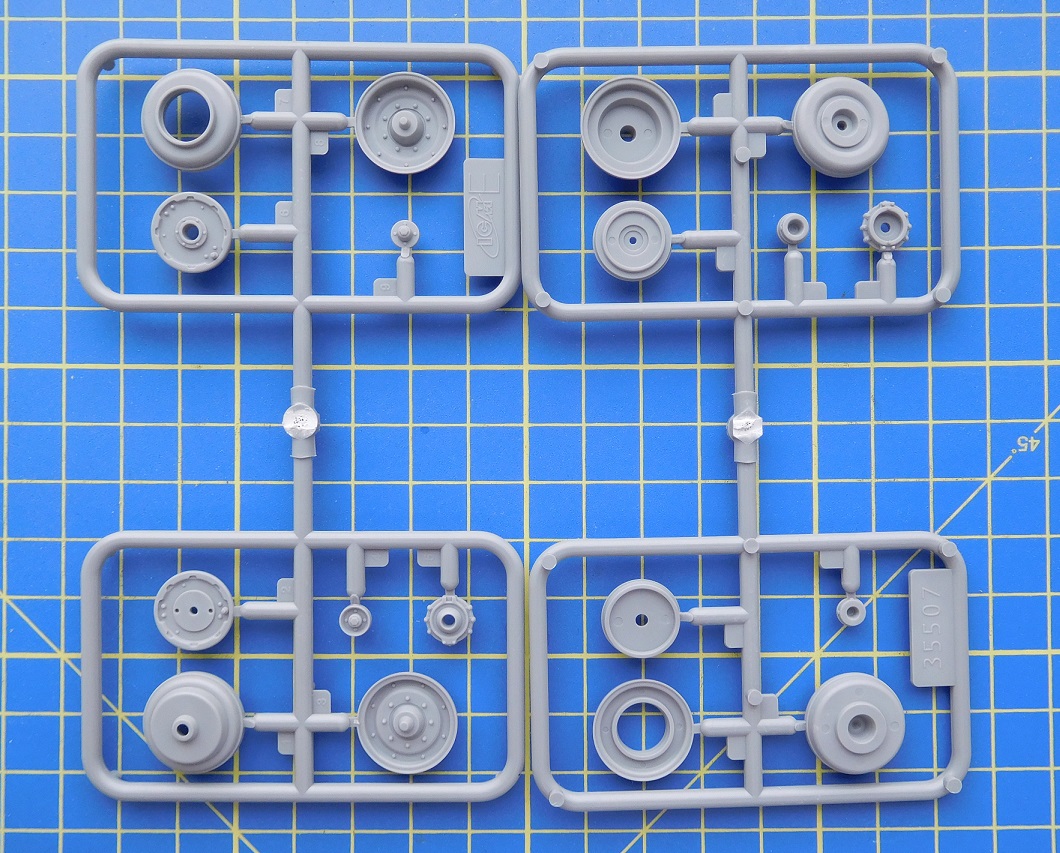 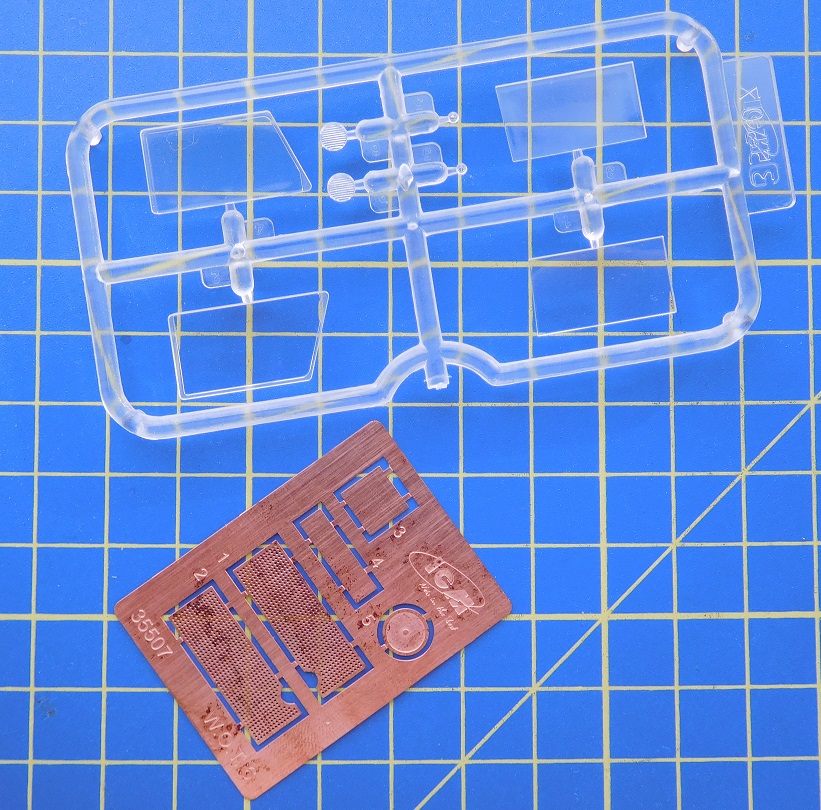 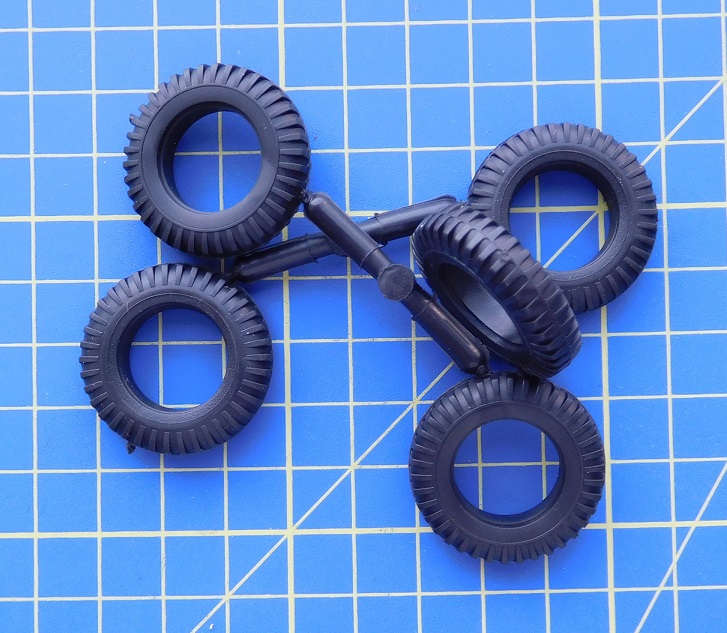 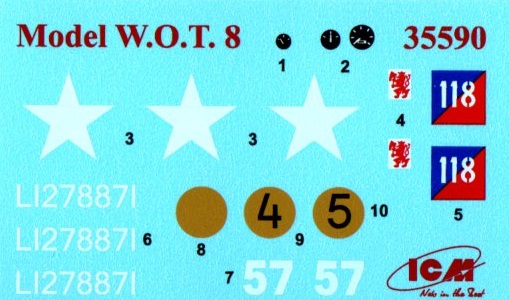 The Kit
This is a new tool from ICM as part of their WOT line; the WOT6 was reviewed by myself on this site last year. The kit arrives in a standard ICM box with their captive inner lid (please, other manufacturers take note!)and a nice rendition of the vehicle on the top. Inside are eight sprues in grey styrene, five black tyres in flexible plastic, a clear sprue, a small fret of Photo Etch (PE) brass and a tiny decal sheet that is found inside the glossy colour instruction booklet.
Construction begins with the chassis ladder and the front sub-frame with cross-members and leaf spring suspension, plus a full V8 block made up from a good number of parts. The exhaust has a silencer near the rear and exits the underside at the rear of the aft suspension springs to which the rear axle and differential are fitted, then joined to the central transfer box by a driveshaft with the front axle having a similar reversed layout plus steering box. The drum brakes are hidden behind the wheels, which are made up from the flexible “rubber” part that is sandwiched between the inner and outer hub, plus extra detail parts on both sides, eventually slotting onto a long axle front and rear. It is a shame the tread pattern on the tyres is post-war rather than during, but I suppose you can't have everything.
The underside is mostly complete, and attention turns to the body beginning with the engine compartment between the two curved front wings. Radiator, air filter and fan are added along with a starting handle for manual starting, then the radiator hosing is installed so that the side plates that separates the engine from the crew cab interior can be added. In the right foot well the driver’s controls are added, a nice touch this, I detest moulded on pedals! A handbrake is sited further to the rear, and a central instrument panel sits almost on top of the engine. The crew seats are situated on top of boxes and have separate cushions for back and seat. After this, the cab can be closed in, adding detail parts and glazing panels.
The sloping cab is trimmed with a dash panel and steering wheel, then, separate doors with handles and more glazing are put in place either open, closed or anywhere in between at your whim, then closed in with the rear cab and finally the curved-sided roof. The PE radiator grilles have to be bent to match the contours of the cab and this is joined by a weather canopy which diverts water or dust from the engine intakes. No doubt it also directed some of the engine fumes from the cab environment.
The spare wheel and the very well detailed fuel tank are built next. This does look quite a substantial unit and is positioned behind the cab wall and in front of the headwall of the truck bed. This is made from a large floor, detailed sides, front and tailgate, with stowage boxes between the front and rear angled mudguards, which have braces holding them at the correct angle to the floor. The bed's cross-rails mesh with cut-outs in the chassis rails. The tilt hoops are glued across the flatbed, and joined by shortened rails that support the tilt lengthways. You can also build the model with the tilt in use by using the five parts provided on the sprues, but these won’t show the tubular framework inside. My advice for that is, manufacture some from wire or flexible plastic rod and painted prior to installation.

Markings
The model comes complete with painting instructions for two versions:
WOT 8 1st Czech Armoured Brigade, Germany, Spring 1945
WOT 8 France, Summer 1944
The decals are printed in the usual ICM style with good register and clarity, but the yellow circles seem a little translucent, so it may be wise to prepare for them with a white or yellow base layer. Both versions of the vehicle are shown in an Olive Drab finish with Khaki tilt. Time for a moan. Taking into consideration the truck was used in the North African campaigns, decals and painting instructions could have included for this theatre of operations. I think a set of RAF decals could also have been added. 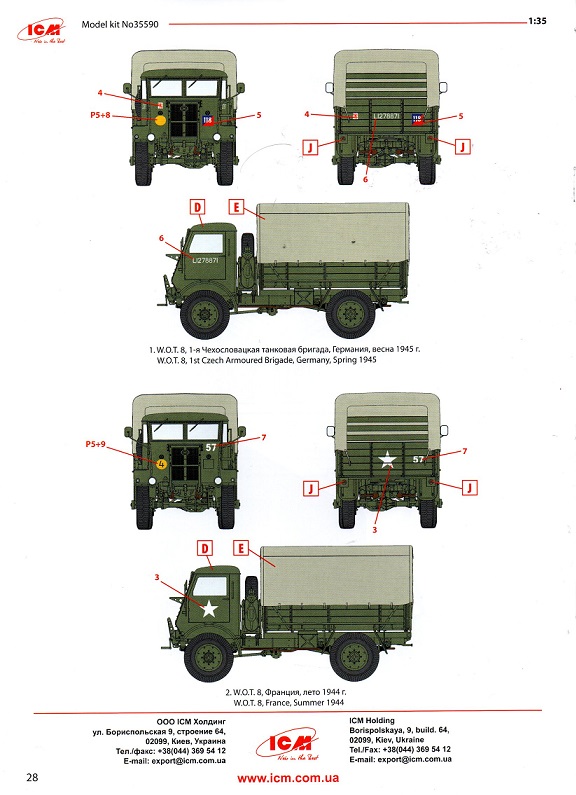 Conclusion
Another first-rate kit from ICM of an often overlooked British truck that was fairly common both during WWII and after. Despite the poorly researched tyres and lack of extra decals, this is an excellent model.
The instructions can be a little ambiguous and care needs to be taken when assembling the kit. I also think a driver figure may have been a good idea.
Overall rating - four out of five.

130,000 built of all versions, all with the Ford flat head V8, same engine as powered umpteen thousand landing craft and universal carriers.
Nothing surpasses the beauty and elegance of a really bad idea....
You must log in or register to reply here.