Dear the old and bold of ARRSE, I've had a lot of time on my hands recently due to being on furlogh and I've started a little project.

I first served on an Op BANNER tour in mid '97 mainly working in South Tyrone and South East Fermanagh and I have a distinct memory of patroling past the old Kilturk PVCP which by this point had been closed for a couple of years. I have often wondered what had come before.

I'd like the ARRSE membership to fill in the blanks if they could with the locations (a name of the base and a GR or address if possible) and the resident sub units.

What I have so far is below:-

No doubt I will have more questions as time goes by such as "what was the Lisnaskea Incremental Roulement Battalion and what was their AOR?"

They are all in a Friday night whisky induced stupor at the moment. Once they have had their breakfast in the morning and nurse had given them their meds, I am sure that they will be banging away at the keys to tell you that 1st Loamshires under Lt Col Bufton Tufton were the Lisnaskea Incremental Roulement Battalion and that their AOR covered Dublin.

We were seconded to 11 UDR at Fort Mahon in early 87. They were having a bit of a rough time. Within two hours of arriving the klaxons were sounded for a mortar attack. My memory of that particular battalion is that although we had respect for the UDR and the daily dangers they faced, we were made to feel less than welcome. I think their TAOR was mainly Portadown and Lurgan. I was glad we were only there for a week or so, but I will say their cookhouse was top notch.
'Hey Limedogs, while youse are over here, your wives are getting shagged...' 'Yeah, and while we're here so are yours!'
9

7/10 UDR BHQ was in Malone Rd, Palace Bks was a company base by then (having been 7UDR HQ before merger)

Are you also trying to work out which company was in each base? 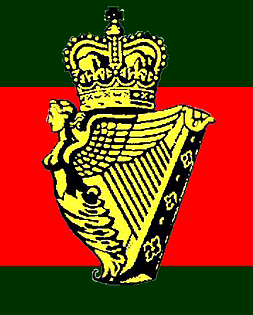 List of battalions and locations of the Ulster Defence Regiment - Wikipedia

Last edited: 16 Oct 2020
Better to be six feet apart than six feet under

Worth a read and gives some flesh to the bones of life in/with the UDR.

This is the recruiting, training and patrolling history of E Company 5th (Co Londonderry) Battalion The Ulster Defence Regiment. The last Coleraine Militia and their fight against terrorism.
ecohcoy.tripod.com
He suis jambon fume’