Did this British PoW really smuggle himself into Auschwitz to expose the Holocaust... or is his account pure fantasy and an insult to millions who died there? 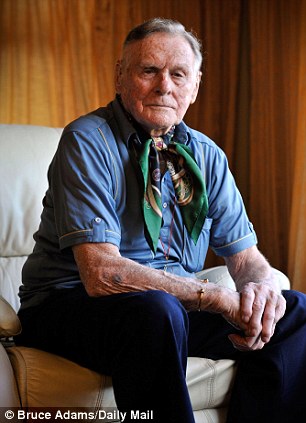 Fact or fiction: In his book The Man Who Broke Into Auschwitz, Denis Avey says he smuggled himself into the death camp - but his claims are becoming more and more refuted

The story of Denis Avey is one of deep compassion and breathtaking heroism. It is a wartime story that he has kept to himself for several decades, before finally revealing the full account in a book that was published this month.

Called The Man Who Broke Into Auschwitz, the book is already a best-seller.

It tells how Mr Avey was held by the Germans in a PoW camp next to Auschwitz, and how he risked his life by swapping places with a Jewish inmate on two occasions and smuggling himself into the concentration camp to record for posterity the horrors of historys greatest crime.

The book also tells how Avey saved the life of another Jewish inmate, called Ernst Lobethal, by supplying him with cigarettes.

Lobethal had been raised in an orphanage in Breslau in what is now Poland, and in January 1943 he was sent to Auschwitz, where he had to use all his wits to survive.

He was able to trade the cigarettes for new soles on his shoes  shoes vital to his survival in a forced death march from the camp through snow at the end of the war.

When he was Prime Minister, Gordon Brown presented Avey with a British Hero Of The Holocaust Award at a reception at 10 Downing Street.

His name was also put forward to Yad Vashem, Israels official memorial to the Jewish victims of the Holocaust, to be made Righteous Among The Nations, an honour given to Gentiles who saved Jews during the war, held by Oskar Schindler. Avey has been dubbed a man of limitless moral and physical courage by a Pulitzer Prize-winning journalist, Henry Kamm, and his book carries a foreword by the renowned historian Sir Martin Gilbert.

He has given countless talks about his experiences and has appeared many times on TV and radio.


Read more: Denis Avey 'broke into Auschwitz' to expose Holocaust; but is this account an insult? | Mail Online
Click to expand...

... beggars belief that someone who swapped places with this guy would swap back.
"He has given countless talks about his experiences and has appeared many times on TV and radio." - very humble indeed.
[SIGPIC]

Moderator
I've read the book. He's a big-timer of epic proportions. He was certainly in E715 which was near Auschwitz, but other than that, all bets are off.

Rabbis call for the removal of Catholic church at Auschwitz.
21 22 23

The Saboteur of Auschwitz