For the philistines and savages amongst you that aren't aware, this year see the 65th anniversary of the Normandy landings.

Google it if you want to see how that affected how we live today.

This is probably, sadly one for the last times a larger service will be attended by the now ageing veterans...... There is little funding for them.

I want to do something, even if it is lay on one coach, or rally amongst us to sort out a few PRI minibus etc.

I need a volunteer to co-ordinate and liase with the Normandy veterans committee to assess their needs,

In the meantime, by noon today I will have a separate account set up for a collection, specifically for this cause.

These chaps, more than deserve to attand these service's, we owe many of them 'our today' many who didn't come home gave 'their tomorrow' in order that we live here today......Lets help them pay their respects to their muckers.
<a href="http://www.mybannermaker.com" target="_blank"><img src="http://i.imgur.com/O7o54.png" alt='Create your own banner at mybannermaker.com!' border=0 /></a><br>

Up for the co-ord bit if it helps. Sadly I don't have any coach firm contacts.
PM me if you deem me appropriate. Won't be offended if someone else, with contacts, comes forward.

We can help the veterans even if the government won't/can't!

I'm trying to fiddle on MDN's behalf after our discussion this morning about this (who knew you could get internet connection in court!).
So far I've only been able to unearth an email addy for Peter Hodges who's the Honorary General Secretary of the Normandy Veterans Assosiation, and a lovely email has been sent to him. But I'd really appreciate if any of you have a contact number for someone in the NVA who can advise us.

Ping me a PM if you've got a contact number I could use.
In the quiet words of the Virgin Mary... come again?

Good man, one of my best days was in the company of a tank gunner, who landed on D-Day and fought across Europe, which ended even though on a sad note, finding the graves of his 3 mates near Nijmegen, the first time he had seen them since 1944.

I've found out that each local branch organises it's own affairs and visits to Normandy, via the NVA. Cumbria Branch (76 Carlisle) seem to be the big daddies, as in being very active, so I've left a delightful message for them to call me back.

If any of you folks out there have the contact names and numbers for other branches could you please let me know, cheers folks!
In the quiet words of the Virgin Mary... come again?
S

RIP
A friend of mine is involved with the Somme Center over here in NI as well as other Mil History orgs,I'll be seeing him Mon so I'll see what he has.
Spike
[SIGPIC][/SIGPIC]

MDN
I've contacted 2 local coach companies regarding transport - I don't think I'll get a firm reply until next month or so, but here's hoping....

However, if you want I'll try and scrounge a helibedford or two from Altcar Range ....

Flowers has spoken to some NVA grown ups and the Normandy anniversary is sorted, mainly thanks to a series of radio plea's this last couple of weeks.

They did say there are other services at different venues that aren't so widely publicised that veterans struggle to get too.

I'll be meeting up with him at the back end of next week so will keep you posted, but as yet there is no need for us to act on anything.
<a href="http://www.mybannermaker.com" target="_blank"><img src="http://i.imgur.com/O7o54.png" alt='Create your own banner at mybannermaker.com!' border=0 /></a><br>

MDN
Can I send Endex to all stations, then??

RIP
Just in case any of you are unsure of the calibre of men we are talking about take a read through this., we owe them everything.
"Remember that you are an Englishman, and have consequently won first prize in the lottery of life".

Never doubted the how nails all of them were....

I was invited to Wigan Social Club t'other day to give a presentation on behalf of H4H.

Speaking to a number of them before the session their stories they told were amazing, even the ones who did Korea and Suez.

There were quite a lot of ex-crabs (noticeable by their moustaches, no seriously) and they were a laugh and a half.

One of the paintings there really made an impact on me....it was of a Spit, but in the clouds beyond the Spit was the faint outline of Sopwith Camel. The title of the picture....."In good hands".

I think that painting title should be given to this appeal, because without their sacrifice we would be speaking Kraut now, and it would be nice to think that they are now "in good hands"
In memory of John (Jack) Wright. Died 23rd August 1916 RIP

Moderator
I understand the Lottery is stepping in to make this happen - caught the tail end on the news, no link yet.

THERE YOU GO
Success is never final and failure never fatal. It's courage that counts.

RIP
Outstanding. Wasn't aimed at you dave, just a general 'these are the guys we owe' post, as well as a riveting read.....
"Remember that you are an Englishman, and have consequently won first prize in the lottery of life".

No probs O_S, I just wanted to highlight how brave these guys were.

I had to laugh at one point...the Chairman said "an author wants contact with anyone who had anything to do with Spitfires". Total silence...so he asked again, "aircrew, cleaners, anything".....no reply again.

There were ladies (sorry, a couple of WRAF) in the audience but the Chairman then said "FFS, lads, some of you must have had something to do with Spitfires!!!"

Came this very small voice in a very quiet whisper from the back of the room:

"I crashed one once"

dave8307 said:
No probs O_S, I just wanted to highlight how brave these guys were.

I had to laugh at one point...the Chairman said "an author wants contact with anyone who had anything to do with Spitfires". Total silence...so he asked again, "aircrew, cleaners, anything".....no reply again.

There were ladies (sorry, a couple of WRAF) in the audience but the Chairman then said "FFS, lads, some of you must have had something to do with Spitfires!!!"

Came this very small voice in a very quiet whisper from the back of the room:

"I crashed one once"

The place just fell apart - it was bloody hilarious
Click to expand...

Reminds me of the tale of the WAAF who was tasked with delivering some light bomber or something similar to an operational squadron and told to take along Group Capt Stuffed Shirt Smythe and his Arrse Duty Cleaner (ADC) for a lift to the same aerodrome.

She (all 5'2" of her) is leaning against the wing readng a 'book' when up rocks Stuffy's staff car - "You there - is this the aircraft going to Scampton?".

Profound walrus type bellowing heard on the dark side of the moon.......followed by "What's that you're reading?"

"That'll be the Pilot's Aircraft Operating Manual, sir" (or Instruction Manual on How to Fly the Aeroplane!).

Walrus type bellowing can still be heard today at that aerodrome............

Little known fact, until the last few years at least, that the vast majority of operational fighters and bombers were delivered to their front line squadrons by often very diminutive ladies of the WAAF, who saw the aircraft type for the very first time when they turned up to pick it up.......and some of these buggers would bite like an epileptic jackass if you didn't treat them right. One fcuk up and it would often be your last and these girls knew it but prior to D-Day they were clocking up the hours making sure all squadrons had their aircraft.

Ladies they may have been, small they may often have been, very young they invariably were but they all had balls like ostrich eggs!!
Setting unbelievably low standards since 1960 and consistently failing to achieve them at every given opportunity.........recommended for a commission!!

You can read all about them here 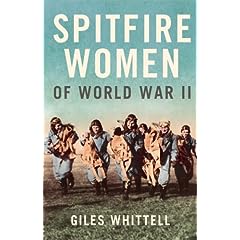 'Some of the Air Transport Auxiliary's female pilots may have objected to being called "tough" simply because they were women -- but they were as tough as nails all the same, as this superb account makes clear. They flew unarmed, without instruments, in atrocious weather, and hardly paused to grieve when their comrades started crashing into hillsides. At long last these magnificent women have the tribute they deserve.' Sir Ranulph Fiennes 'Extraordinary stories of women who had little fear and minimal concern for the enormous step they were taking in banging "Good grief, it's a girl!" condescension on the head.'
Click to expand...