This is an interesting book, a relatively slim tome of 176 pages but with pictures, maps, extensive notes and bibliography which takes the reader from the start of campaigning in North Africa to the point at the end of the Battle of El Alamein in 1942 under the command of Montgomery. Rommel by this time was an ill, exhausted man. Hitler only really became involved in North Africa at the behest of his Axis partner Mussolini, but at that point it opened up Germany and its allies to a war on three fronts and during this campaign that increased to five fronts, which vastly over-extended the axis forces capabilities with regard to the availability of raw materials to propagate the war,

As students of history will know, this campaign was fought in a relatively narrow battlefield, with a boundary to the north to the open sea and to the south to yet another sea, but this time of sand. 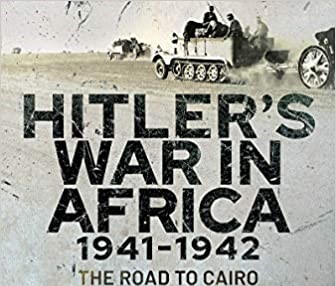 It reveals that on the British and Commonwealth side of the campaign it was not all plain sailing with hyper efficient and very capable commanders that we see in other history books, in fact, this is the first book I have seen that actually shows the British and Commonwealth commanders as actually being human with all the frailties that humans have. Whilst on the German and Italian side of the battlefield, they also had the same situation with commanders not being the most effective or competent. The author also looks at the morale in particular of the Italian forces, who he postulates that a lot of them didn't actually want to be there fighting, but many did, displaying great courage and fortitude.

The revealing part is the recollections of the more front-line soldiers telling of the sights, smells in particular with regard to coming upon armoured vehicles which had been hit by tank on tank or anti-tank fire and the mortal remains of their crews, lack of sleep, rations and water, living with the consequences of a war in the desert of heat and cold, disease from dysentery to infections being difficult to heal in this just pre-antibiotic era.

The author does not hold back in his writing regarding the commanders on both sides, and it is particularly interesting to read of the problems on the Allied side. The final two chapters of the book reports of the actions during the final battle of El Alamein in particular from the soldier’s eyes from both sides of the battlefields. The tide in North Africa turned when the British really could not retreat much further east and the Eighth Army under Montgomery stood fast re-organised and most importantly was trained as there were many in-experienced troops, resupplied with matériel also benefiting from a far shorter logistics train. Rommel by comparison had very poor logistics support due to lack of command of the sea route of re-supply, which became less and less as his campaign progressed. He also lost air superiority over the battlefield as the war progressed.

The war in the desert was indeed a war of not just the gallantry of the fighting troops but one of logistics, which as the war in North Africa progressed through time became more and more decisive in the eventual outcome as advance and retreat in a narrow corridor of passable land.

In the summing up of the late Sir Anthony Quayle playing the part of a German officer at the end of ‘Ice Cold in Alex’ the greatest battle was not between men but between all men and the desert.

This a very good book which has much to recommend it, but the irritation part was the use of the American type abbreviation such as 1/7 or 2/8, this gives no indication of which formations are being referred too, for that I must mark it down on half a mark.

· From NULL
NULL
Book Reviewer
U

With regard to Australian Divisions in World War II, the prefix 2/ would distinguish battalions in the militia and from their predecessors in the First AIF, for example, the Victorian 2/5th Battalion or South Australian 2/10th Battalion.
B

udondave said:
With regard to Australian Divisions in World War II, the prefix 2/ would distinguish battalions in the militia and from their predecessors in the First AIF, for example, the Victorian 2/5th Battalion or South Australian 2/10th Battalion.
Click to expand...

Just to clarify a bit further. The "2/" refers to units of the 2nd Australian Imperial Force (AIF) raised in 1939 for overseas service to distinguish them from the First AIF raised in 1914 for overseas service. The Militia was still existent in Australia at the time but were not allowed to serve overseas with Papua not considered to be overseas. The 2nd AIF Divisions were numbered 6 to 9 in continuation from their 1st AIF Divisions of 1 to 5. Both the first and second AIF were volunteers.
D

Book Reviewer
Thank you, that is not explained in the book.

BarcelonaAnalPark said:
Does it talk about the German Sigint capability in North Africa & Capt Seebohm?
Click to expand...

It does, but not in great depth, as it covers the two years of campaigning.

Why no mention of the Free French ?

LepetitCaporal said:
Why no mention of the Free French ?
Click to expand...

They got paid, didn’t they?

LepetitCaporal said:
Why no mention of the Free French ?
Click to expand...

Too many slimy snails ..IMO