Roadster280 said:
Not really ham, but still radio, and bits behind it, I’ve had a hell of a last month or so fvcking about with it.

AT&T then released their wireless home internet, 4G, $50/mo for (now) 350GB. Then their tower shat the bed for best part of a week, so I got T-Mobile’s 4G service, same price, but unlimited data, and ran both in parallel. My Cisco router will actually aggregate both, but it doesn’t work well in practice. So I used T-Mo as the primary and AT&T as the backup. The 4G services got 35 (T-Mo) or 50Mbit (AT&T)(better antenna).

Then T-Mo launched 5G, so I ”upgraded” to a 5G gateway. I‘ve been fvcking about with this shit for a month. I figured out that the internal antennas were giving me ~120Mbit, but I could almost double that with better antennas. So I ordered those, and indeed posted them on here. So now I can get ~200Mb.

But... the gateway device V1 failed on me. No problem, send me another. That failed too, inside a week. Send me another. That’s been OK now for a couple weeks. I have my external antennas, and if I connect directly to the gateway, I get the el-rapido connection. But through my Cisco router? Like shite, ~100Mb. So I need a new router. I bought a Ubiquiti UDM Pro, which is a nice router. Immediate buyers remorse, it will control cameras, but only Ubiquiti ones. Which cost a fortune. And looking at the specs, it’s a quad-core ARM 64-bit. In other words, a Raspberry Pi 4, which I could have bought for a quarter of the price.

So the UDM Pro goes back, and I get an RPi 4. Which the Ferking T-Mo Gateway doesn’t like as a router behind it, with double-NAT. The voodoo magic of IPV6 also is playing a part. If I turn off IPV6 in any part of the network, it sulks and cries. OK, fvck it, the Gateway can be the NAT box, but its features are so limited, it really is a gateway, not a router. I cant’ tell what DHCP addresses it’s dished out, as an example.

So now I have a pretty fast internet connection due to me figuring out the 4x4 MIMO external antennas that it doesn’t support D), but can’t tell for shit what’s going on in my network, and an RPi 4 that I’m configuring as a NAS/NVR/Camera control box. But so fvcking fatigued with trying X, Y and Z just to get what should be a straightforward job done, and getting fvcked over at every turn.

I might eventually even get the fvcking ham radio antenna plugged back in !

I hate purity, I hate goodness, I don't want virtue to exist anyway; I want everyone corrupt

On this thread? Quelle surprise

Here's a group photo of some of the regular posters on this thread... 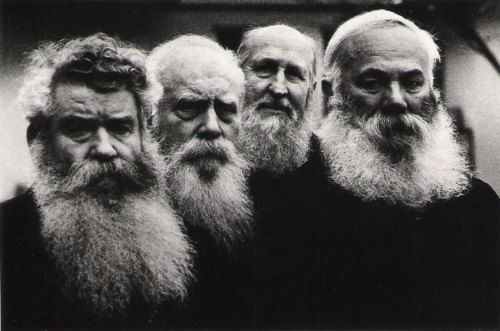 Kit Reviewer
Book Reviewer
Short thread on Radio in the South Pacific during WW2, at the Battle of the Coral Sea

rampant said:
Short thread on Radio in the South Pacific during WW2, at the Battle of the Coral Sea

I found it a bit tricky to get to the content but once there it was interesting thanks. Here's another about radio in the Pacific war but thankfully more sucessful.

I've not been posting much on arrse past week.
Possibly related to what @endure posted to me and- I'm in a massive youtube spiral / learning curve.

Incidentally - does anyone know a good remedy for ingrowing neckbeard hairs?

supermatelot said:
I've not been posting much on arrse past week.
Possibly related to what @endure posted to me and- I'm in a massive youtube spiral / learning curve.

Incidentally - does anyone know a good remedy for ingrowing neckbeard hairs?

An ounce of prevention being better than a pound of cure.

Sporting a beard is not mandatory, mere eligibility is sufficient.

An ounce of prevention being better than a pound of cure.

Sporting a beard is not mandatory, mere eligibility is sufficient.
Click to expand...

He might be getting confused with cats whiskers (the wire and crystal detector, not the cat food)

A bit of life on the ocean wave. Towards the end you can hear Lyngby Radio/OXZ (Denmark) closing down for good on 500kHz as the dreaded GMDSS takes over

On another thread, relating to a series of military radios that pre-dates even @greenbaggyskin ( ), @supermatelot was casting aspersions upon my good self with regard to the calibration or “synchronisation“ as described in that thread, and questioned by @endure.

I’d like to point out that as the owner of a Radio Amateur Licence, @supermatelot has basically “attested”, and was issued beard and sandals. Having taken the Queen’s Shilling, one cannot simply turn round and say ”I don’t know anything about that, I‘m just a matelot”.

I very much doubt that the Radio Society of Great Britain (or the ARRL for that matter) would admit to its ranks a person that is not au fait with frequency determination, and the advantages/disadvantages of frequency synthesis. RSGB doesn’t give out its credentials in Cornflake packets.

You’ve now taken the “Hippocratic Oath” of the “Brains Trust”. Deal with it