Kit Reviewer
Book Reviewer
The more eagle eyed of you may recall that I was in Germany last month checking out boot factories and stuff.

Anyway, during my adventures I was given 3 new pairs of boots to review. I've been wearing the first pair for a good month now, so it's about time to get my thoughts written down and banged up on here.

First things first, I'm feeling pretty lazy this evening so to save me transcribing all the bumf from the manufacturer, have a skeg at this:

First impressions on these are that they look very cool. Even my Mum agrees. She was up at the weekend and had a quick gander at all the different boots I've acquired. Of the 7 or 8 pairs I've got, these were her favourite.

So there you go, they have received my Mum's seal of approval.

I can see why she liked them. During my Germany trip, of all the boots I saw, these ones looked the coolest in my opinion. The modern design and different materials really stand out. The other thing that immediately catches the eye is the zip on the side.

Personally I'm not a zip man, I don't like them on boots, never have. However there is quite an interesting reason that these desert boots have specifically been designed with a zip:

As we wind down from Iraq and Afghanistan, the main customer for purely desert orientated boots are middle eastern countries; Saudi Arabia, UAE etc. Not to mention the ANA. These guys all share one thing in common - they are Muslims. Muslims take their shoes off 5 times a day in order to pray.

That's why we have a zip.

Obviously it also helps everyone else put them on and take them off, but that is the main reason.

On close inspection, the boots appear to be very well made, oozing quality that I've now grown to expect from HAIX. The label says they were made in the Far East, Vietnam to be precise, but there does not appear to be any quality issue due to this. Lots of footwear and clothing comes from Vietnam. Stitching is good, the material looks nice and everything appears to be in order.

One major thing to note is that these are NOT waterproof. No Gore Tex in these boots and no baffle behind the zip. Even walking through the morning dew on grass will give your feet a good soaking. Much of the boot is made from a thin ripstop material, the same as you'd find in running shoes. While this is lightweight and very breathable, it offers zero protection against water.

But they're for the desert so that doesn't matter. Or does it?

Lots of the feedback that Gore received from soldiers who'd served in Iraq and Afghanistan, was that there are shitty open sewers everywhere. Despite the heat and sand, soldiers wanted waterproof boots because they spent a fair bit of time traipsing through human shit and piss. Gen dit.

Gore addressed this by developing materials to go into boots that are faeces (and water) proof.

These boots have none of this going on. Wade through a puddle of shit and your feet are going to get a nice soaking. They're only really good for very hot, very dry conditions.

Having said all that, I do still really like these. Once I'd got used to the Islam compliant zips and the non poo proofness, they really started to shine as a good comfy day to day boot. The wearing experience is similar to Hi Tec Magnums I suppose, just infinitely more stylish. They're very comfy, very light (1.5kg) and offer a fair bit of support and ankle protection. Sort of a trainer boot.

Another nice little feature is the rubber pad on the ankle area for extra protection. I've seen this on lots of other HAIX boots and it adds confidence when wearing them on rough terrain.

These boots would certainly suit security guards or police (they do come in black) and because they're pretty much trainers with a bit of ankle support, you'll have no trouble running down and catching those crims.

All in all pretty nice boots, however they'd be so much better without the zip and with some Gore Tex chucked in. Also the cheapest I can find them for online is about £120 which frankly is way too much. Save for looking exceptionally cool, they do nothing a pair of desert Magnums don't do at half the price.
One cannot begin to fathom the immensity of the **** I do not give. 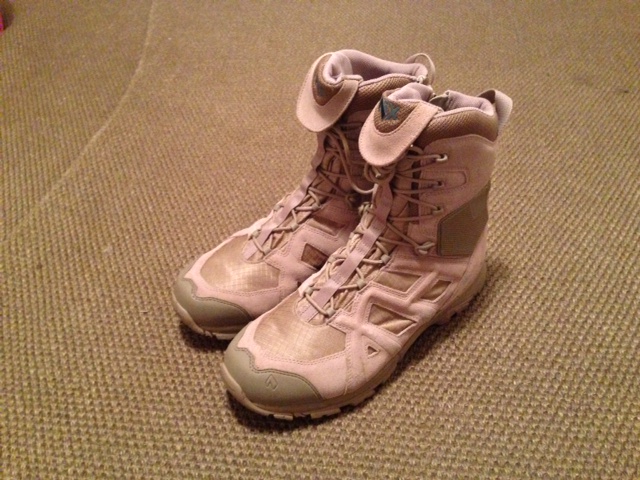 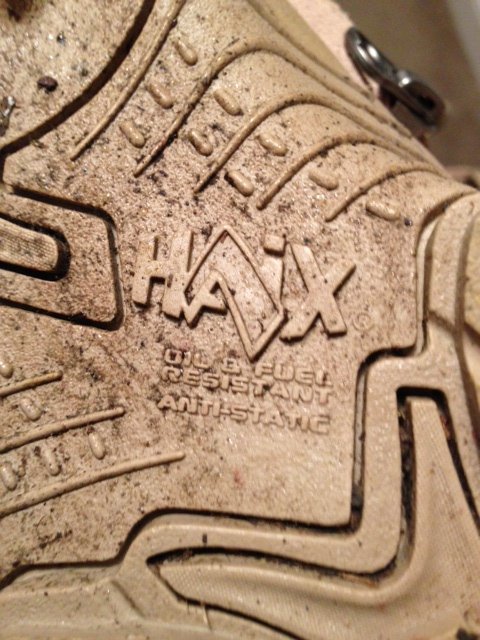 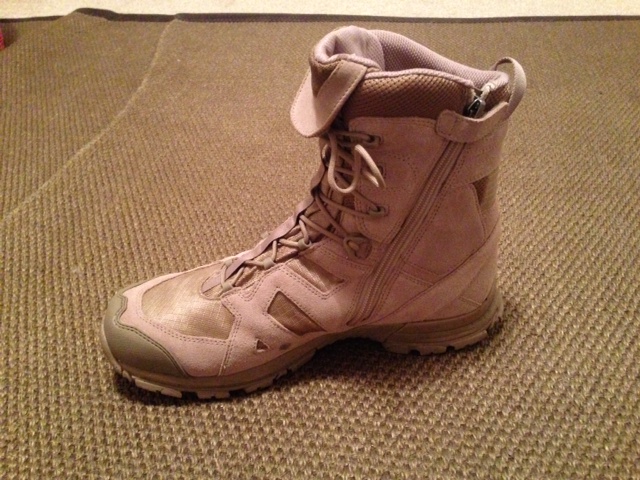 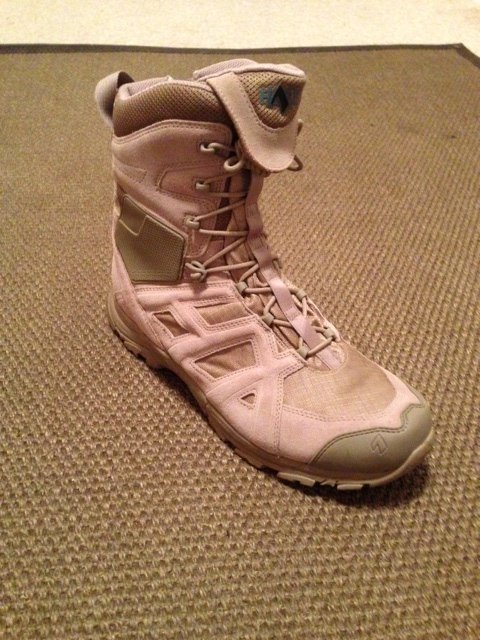 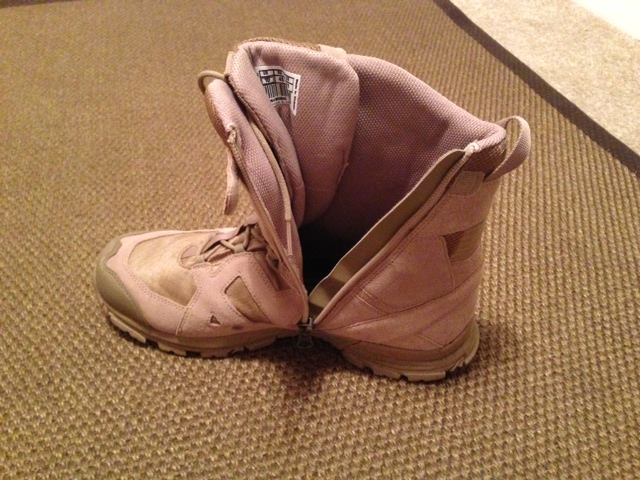 Kit Reviewer
Book Reviewer
Please could my local friendly mod move this to the reviews section. It won't let me post them directly.

After everyone's finished bitching and taking the piss of course.
One cannot begin to fathom the immensity of the **** I do not give.

Did you covert to muslamic to review them then ? And your mum liked them ?

I am a long time gone from the Army,
Thank god.. I really think they look shyte, I suppose Darcy Bussell might be interested in a pair though,
yeh yeh yeh, I know my spelling and typing is shyte.

Good point on the waterproofing. If you are walking through effluent on a regular basis and the boots are not they will begin to stink - permanently. Parts of the Middle East and Central Asia also transform themselves into a morass of cement like mud during the rains in January to March.
I wear dark glasses so the coppers cant see my brain - Ian Brady, Child Murderer

Curiosity took me to the Haix website looking for safety boots - Lowa do some good ones for hot weather - doesn't look like these Haix eagles athletics would ever have with a rated safety toe cap - shame.

incidently, I think I can guess from their english page why Haix are such a hit with a sailor......... 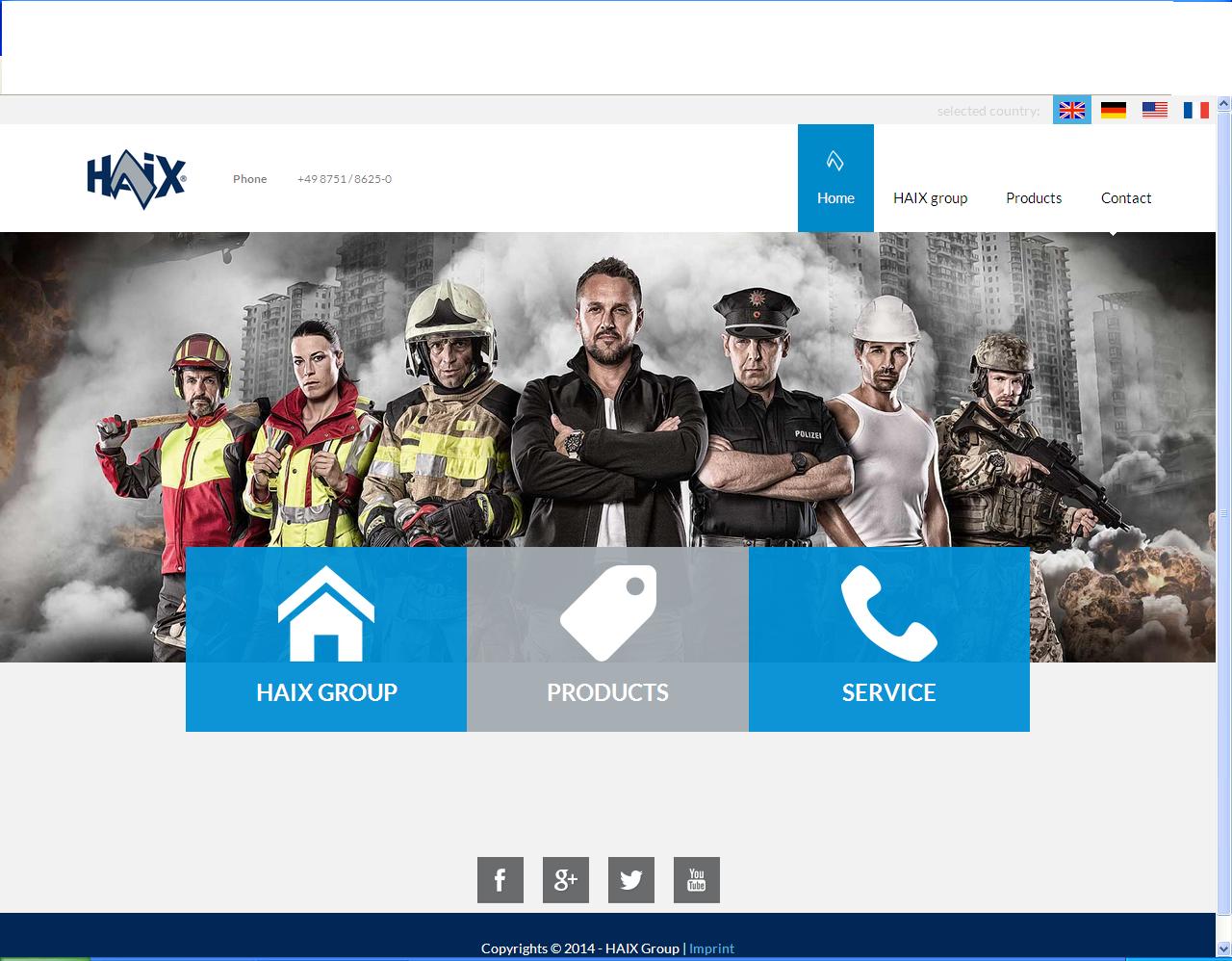 The major didn't think of his superiors as fools, of course, since it would follow that everyone who obeyed them was a fool. He used the term 'unwise', and felt worried when he used it
First rule of Dunning-Kruger club is you don’t know you’re a member of Dunning-Kruger club
Dog Loser-in-Chief 2007

They've already been told that their tag line "heroes wear HAIX" is about the gayest thing ever.

But it gets worse:


Awesome lyrics.
One cannot begin to fathom the immensity of the **** I do not give.

They've already been told that their tag line "heroes wear HAIX" is about the gayest thing ever.

But it gets worse:

Brilliant - its like a song from Team America that didn't make the final edit
The major didn't think of his superiors as fools, of course, since it would follow that everyone who obeyed them was a fool. He used the term 'unwise', and felt worried when he used it
First rule of Dunning-Kruger club is you don’t know you’re a member of Dunning-Kruger club
Dog Loser-in-Chief 2007

Im surprised they didnt get David Hasselhoff to sing in that wearing a 75% open shirt .
NULL

Admin
Review now online http://www.arrse.co.uk/haix-black-eagle-athletic-desert-boots/
Enjoy the site? Received support from us? Why not click on an ad or two. You'd be surprised how much that helps!

I quite like these boots but not enough to waste £120 though.

Thanks for the photos and review.

Gallery Guru
Made in Vietnam so the unit cost will be £5 maybe.

Nice one, how do they perform in the desert?
واحدة

RIP
Ravers, how good is the ankle support? One of my ankles is knackered which means I virtually walk on the outside of that foot. I've got a pair of high ankle Merrells which straighten out the leg/foot, but they are pretty warm for a sub-tropical climate.
BBC = Brussels' Broadcasting Corporation​

spaz said:
Nice one, how do they perform in the desert?
Click to expand...

I went for a stomp around in my kid's sandpit and I can confirm that they perform well in sandy conditions.
One cannot begin to fathom the immensity of the **** I do not give.

JoeCivvie said:
Ravers, how good is the ankle support? One of my ankles is knackered which means I virtually walk on the outside of that foot. I've got a pair of high ankle Merrells which straighten out the leg/foot, but they are pretty warm for a sub-tropical climate.
Click to expand...

Very good ankle support. The lacing system allows you to tailor the fit very well. There are also the rubber pads to protect the ankles from knocks etc. these also add a fair bit of support.
One cannot begin to fathom the immensity of the **** I do not give.

30 Dec 2020
bentobox
B
A
Haix High Liability boots Standard or Desert for HIKING?