Posted on Rum Ration but worth an outing here.

I am a sucker for books from guys who tell it as it is (names changed to protect the guilty – sometimes) rather than the dry memoires of a senior officer, and this book does not disappoint. Tony aka Wilts has brought us a few dits of his time in the navy, and particularly while on a deployment on HMS Sheffield in 1995 to Australia, with stops in between.

Wilts has a nice easy style of writing which I found easy to read, has a sharp sense of humour and brings this to the book. The book deals mainly with the deployment of HMS Sheffield to Australia in 1995 but the author brings in other stories from his time in other war canoes. Many of the stories will be familiar, certainly to any who were on that cruise, but I am sure that similar events happened in different ships, in different ports in many parts of the world. But the stories are hilarious and there are a couple of belly-laugh moments, such as the time when a birthday Wren has a ball n chain locked to her ankle when she receives a request to pay a visit to the Captain. Such requests are of course somewhat mandatory and to be complied with forthwith. Now, the guys in the Mess had thought it funny to hide the key, and after several sherbets had been taken, said key could not be found. I believe the Captain was ‘not amused’. 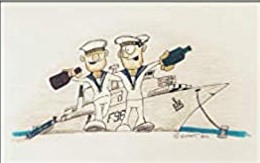 ​
There are many stories, or dits as you matelots like to call them (handy glossary at the back of the book), in this vein, most, if not all after strong drink had been taken. I will leave the other dits for you to find out about


​
Now this may sound like we are being treated to a cruise similar to those offered by Peninsular & Orient but there was some work to be done in between runs ashore, but Wilts does not spoil the book too much by detailing these periods of toil!

I thoroughly enjoyed reading this book, it is well written and easy to read. Self published through Amazon, I encourage you to buy this book, relive a bit of your own lives by identifying similar times and just sit back and enjoy the cruise. Fearing for his liver, Wilts left the Navy after 7 years, but with a lifetime of experience behind him.