I set off at 18:30 to go to the ground I have permission to shoot over last night. I arrived there to be greeted by the land owner as we needed to talk about what he had seen deer and rabbit wise during harvest time. The news was good for him, not so much for me. He had only seen one deer, with no obvious signs of any more. Coupled with him mentioning that he and his farm hand had been out with a shotgun for several Hrs and only bagged five bunnies. I thought it would be a nice quiet night in the high seat.

Ok so with my expectations suitably lowered I quickly stalked to the high seat. After the usual commotion had died down. The weather started to turn showery, so nothing seen by the land owner and now the weather gods hate me as well.

After the second shower had past I could hear a noise in the stubble behind the seat. This was to be the first of 6+ hares I watched during the evening. He was so close at one point I could have dropped a rock on him as he passed under the seat. Later on I counted up to 20 bunnies either side of my seat, many kittens so they have been breading like...

The time had rolled around to 20:30 I had been watching a young hare filling its belly then moving on a couple of hops then eating more, when I decided that it was time to call it quits. As I climbed down the ladder the young hare just stared at me as if to say WTF where did you come from. As I was about to start to stalk back to the car I spotted a darkish shape 250m further down the tree line.

A quick look though the binos yup it defiantly a Munty. Bugger there is no cover between me and the tree line 15m to my left, and the wind is blowing toward her, so I very slowly walked to the trees not daring to look to often in her direction. I paused for a min before starting to make my way towards her. It seemed to take forever, I could not have made any more noise if I had tried.

I got to a point about 100m from her from which I could not have got closer to her. So I now have to take the shot if I can. I had no choice but to use a kneeling unsupported one, luckily I practice this quite regularly. The first time with the rifle up I was starting to breathe heavily and was nowhere near willing to take the shot. After lowering the rifle and giving myself, a dam good talking to, I was in the aim once more.

This time all was well the shot was taken and she fell in the spot as the Grendel round did its job.

Lessons learnt; well local knowledge can be wrong not often, also never say never. If your there enjoy being out and don’t forget that last look around. 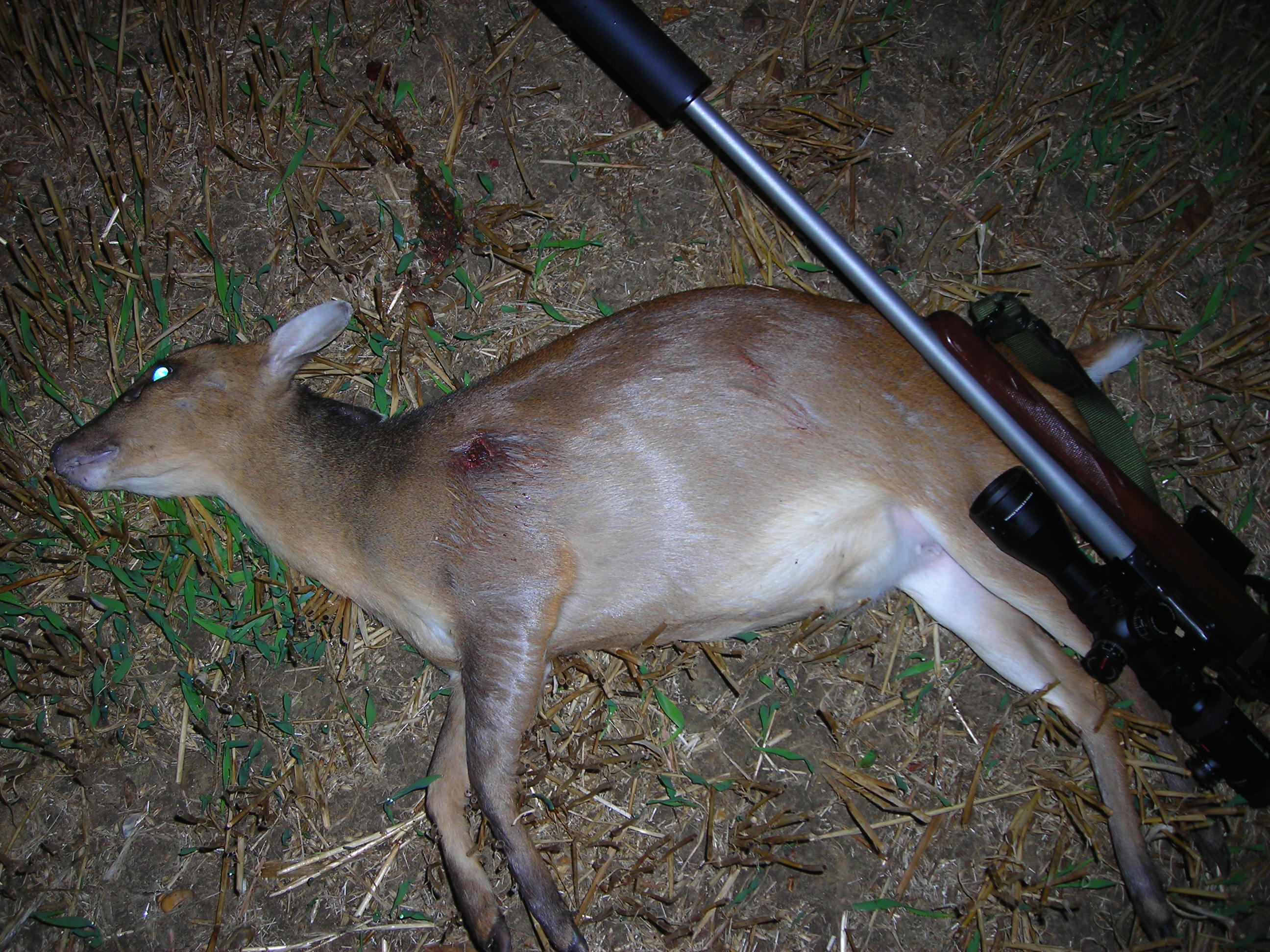 Last edited: 16 Aug 2014
I have no idea what weapons will be used in the next world war... but I do know that world war 4 will be fought with sticks and stones. A Einstein

Heart or lung shot?
"God makes me feel pain because I cheat at darts."

That's the exit. The entry was 25mm right and 25mm below that. So the chest cavity was pretty much mush. So both having clipped the top of the heart.
I have no idea what weapons will be used in the next world war... but I do know that world war 4 will be fought with sticks and stones. A Einstein

Moderator
JWD Claypig, time to blood that .303 of yours!
So long and thanks for all the laughs
https://280british.blogspot.com/

Why did you shoot the deer?

I believe that unless they are culled to a certain population maximum they ruin crops and woodland.
I wear dark glasses so the coppers cant see my brain - Ian Brady, Child Murderer

Muntjac are a shoot on sight invasive species legally protected by the deer act with a minimum calibre but no closed species. Failure to manage the increasing population will result in them being classed as vermin and taken with shotguns. I much prefer the clean miss or hit of the rifle. Sadly because they also breed all yers, are constantly pregnant and do millions of pounds worth of damage to crops, woodland and cars they have to be managed down to a level where they were when escape originally took place from Woburn!
it wont happen and the genie is out of the box.
That and they taste really f u cking nice!
So long and thanks for all the laughs
https://280british.blogspot.com/

As long as you eat what you kill. Can't be doing with cnuts who don't.

Good! Not that it is any of my business, but I'm a lot more disposed to shooting overpopulated deer than just topping them for "sport".

Apart from on the battlefield obviously
What you see is what you get-aint you the lucky one!!!!!!
A

oldmanron said:
Apart from on the battlefield obviously
Click to expand...

There's a reason why pressure cookers are heavily utilised in certain parts of the world...

Roadster280 said:
Good! Not that it is any of my business, but I'm a lot more disposed to shooting overpopulated deer than just topping them for "sport".
Click to expand...

Not something that happens in Europe, deer are shot for meat and management (usually both).
Maybe a few good 'ol boys in your part of the world with too much ammo and beer on board blast away for shits and giggles, but I cannot imagine anyone popping a whitetail and not putting it in the food chain.

Because cooking them alive is cruel you sick puppy
Sinner251 a bone-splitter, a reddener of swords, a pruner of limbs who delights in red-frothed, glorious carnage. No welcome visitor. Not a friendly face. Your lives would be prolonged for getting out of his way. Excellent with the axe and sword he is. Far from trifling the wounds he gives with his ungentle, woe-working weapons. Well damaged his enemies. Their tribes are full of vacancies

Some of her will soon be in my belly... That's why.

Oh and I was asked to for the reasons outlined above. I like knowing that I am eating something I have taken from the wild in to my food chain. That has not been mucked about being killed Halal style. Also it has not been injected with or force fed crap, like a lot of meat that is in the food chain. A last thought, I it get some satisfaction from doing it as well. From the shooting to the butchery, I can honestly say "I did that"

I will now ask a question or two "How did your last portion of meat live before it died? "How many hands has it been through before it hit your plate"?
I have no idea what weapons will be used in the next world war... but I do know that world war 4 will be fought with sticks and stones. A Einstein

Roadster280 said:
Good! Not that it is any of my business, but I'm a lot more disposed to shooting overpopulated deer than just topping them for "sport".
Click to expand...

Why not, nothing wrong with hunting, it is after all our oldest pastime (other than procreating). The beast doesn't care, its dead either way.
Am fear is fhaide chaidh bho'n bhaile Chual e'n ceòl bu mhilse leis
nuair thill e dhachaidh.

Real problem with Muntjac in these parts. Hoards of the little buggers who happily live in an extensive area of woodland which is owned by a charitable trust and adjoining common land. Both with no culling permitted for reasons that defy logic.

Of course they come out to feed with a result that only deer fencing suppliers are happy with.