Pen and Sword Military have pulled it off again: they have published yet another brilliant and readable military biography, worthy of a place beside Richard Mead's biography of Major-General Bob Laycock, Commando General: The Life of Major General Sir Robert Laycock KCMG, CB, DSO (reviewed for ARRSE 13 January 2018 ) and Edmund Ironside's biography of his father, Ironside: The Authorised Biography of Field Marshal Lord Ironside (reviewed for ARRSE 7 May 2018 ). Some of the same names crop up in this book, including Robert Laycock, Winston and Randolph Churchill, Evelyn Waugh, Anders Lassen and Patrick Leigh Fermor.

The average British person remembers two things about George, the second Earl Jellicoe: he was the son of the victor of Jutland and he resigned from Edward Heath's Government in 1973 as a result of his involvement in a 'call girl scandal', which also caused the resignation of Lord Lambton. In reality Jellicoe has many more claims to fame: a student at Winchester and the RMC Sandhurst, originally commissioned in the Coldstream Guards, he led a long life of action, drama and public service. He was, with the Stirling brothers, 'Jock' Lewes and Blair 'Paddy' Mayne, one of the founder members of the SAS. He served as David Stirling's 2IC; was later attached to 'D' Squadron SAS; later still commanded the Special Boat Squadron (SBS) when that became separate from the SAS. While engaged in operations against the Germans in Crete, Jellicoe became an ardent Philhellene and a lifelong friend of Patrick Leigh Fermor, who was fighting with the Cretan guerrillas. Jellicoe later liberated Athens and was instrumental in thwarting an attempted Communist takeover of Greece at the end of the War. He received the DSO for his services with the SAS in North Africa. Because he was a modest man, Jellicoe did not often speak about his exciting past other than with the people who had been with him then, so his wartime achievements did not become well known until later. (See Chapter 4, The Raids: North Africa and Crete,) In 1944 Jellicoe contracted his first marriage to a glamorous Irishwoman, Patsy O'Kane, in Beirut. Like many wartime marriages, this one lasted only ten years.

After the War Jellicoe worked briefly for the United Nations Relief and Rehabilitation Administration (UNRRA), an international humanitarian relief agency, and was then recruited by the Foreign Service. As a diplomat he served in, among other places, Washington, where his colleagues included Kim Philby, Donald MacLean and Guy Burgess. Jellicoe became a close friend of Philby and was initially unwilling to take seriously American warnings about his treason,dismissing them as McCarthyite witch-hunting: “I truly believed him innocent. I was completely deceived by him”. So were many other people.

After service in Brussels and London in the Foreign Office's Northern Department, Jellicoe was posted in 1956 to Baghdad as First Secretary and Deputy Secretary-General of the Baghdad Pact. Patsy chose not to accompany him. Before long Jellicoe was in love with his future second wife, Phillipa Bridge, a young divorcee. Having opposed the Suez intervention, Jellicoe was already in bad odour with the Foreign Office. In 1958 the Office faced him with a stark choice: give up Phillipa or resign. He chose to resign and enter politics. The same year he made his maiden speech in the Lords, wearing Coldstream uniform, about the recent bloody revolution in Iraq. Mutinous troops had assassinated King Faisal II, other members of the Royal Family and Prime Minister Nuri al-Said. Ministerial appointments followed, including First Lord of the Admiralty (Jellicoe was the last holder of that office), Leader of the House of Lords and Lord Privy Seal. He succeeded Lord Shackleton, a Labour Peer and son of the famous explorer, in the last two roles; they became and remained great friends, having a common interest in travel, the environment and the polar regions. 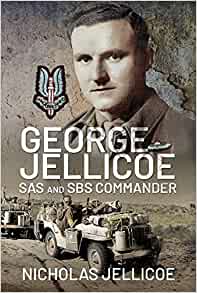 And that call-girl scandal? While Lord Lambton's misdemeanours were not in doubt, Jellicoe's name was drawn in by accident. The name 'Jellicoe' appeared in the call-girl's engagement book, but it referred to an address – Jellicoe House – not to the Peer. A distant relation and social reformer, Father Basil Jellicoe, had promoted the creation of Somers Town in London to provide decent housing for the poor. One of the blocks had been named after him. The fact that Jellicoe had been 'named' and that he had admitted to having occasional extra-marital affairs was enough; the yellow press called for his head. Rather than embarrass the Government, Jellicoe 'did the decent thing'; he resigned along with Lambton. Heath had lost two of his best Ministers.

Out of Government, Jellicoe's life remained as busy as ever. He became Chairman of Tate & Lyle; a non-Executive Director of Sotheby's; President of the Kennet and Avon Canal Trust; raised money for AIDS research; served as Chairman of the British Overseas Trade Board (BOTB) and was a highly-regarded President of the Royal Geographical Society. Honours continued to come his way, including a Knighthood and Fellowship of the Royal Society. The full complement was: KBE, DSO, MC, PC, FRS, FRGS and FRSGS. He entertained the great, the good and the glamorous at his English country house, continued to travel and spent holidays skiing in Switzerland and at Patrick Leigh Fermor's house in the Mani, Kardamyli.

What was the secret of Jellicoe's success? Energy, plus the fact that he loved life and was interested in people. He enjoyed getting to know people and understanding what 'made them tick'.

When Jellicoe died in 2007 he was the Father of the House of Lords, having returned there as a Life Peer after the expulsion of most of the hereditary Peers and the longest-serving Parliamentarian anywhere, ever. His death from a heart-attack was deeply ironic; he had been President of the British Heart Foundation. Six members of the SAS Regiment carried him to his grave.

The author, Nicholas Jellicoe, is the second son of the second Earl Jellicoe, the subject of this biography. Nicholas formerly worked for Rolex, has written two volumes of naval history and lives in Switzerland.

This review can only skim over Jellicoe's career; buy the book and read it. It is probably the most interesting biography to appear so far this year.

Special Forces Operator: Serving with the SAS and MRF

Women Who Spied. By A.A Hoehling