Reading / listening to the news the last fews days about the claim that George Galloway has been taking money from Saddam.

If it's stupid but it works, it's not stupid.

a man curiously in love with the sound of his own voice.

He's also unfortunately my MP and has he actually done anything worthwhile for his constituents? Has he fcuk!
duh duh duuh duh duuh, Insania.....

Man of the peepul......with his villa in Portugal - is he fcuk.  Loud mouthed, arrogant waste of space.  Sooner he is locked up / shot the better
2 up and bags of smoke...and run like hell

Can't someone with a bit of cash bring a private prosecution against him for treason?
Former Int Cell, RLC, and OTC/ACF Forums Moderator (Until the banality started to hurt)

every time i look at him , he reminds me of a seventies second  hand car salesman minus the camel hair coat
S 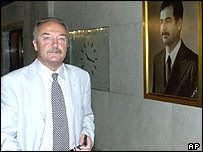 Errrrrrrrr all laudable sentiments, but can we wait till we hear the legal arguements?

I'd just as soon see him swing as the next man, but somehow, an untouched room, when the building is gutted, and a JOURNALIST who in a room full of secrets, only wanted to see the ones with "Britain" on them?

Yeah right, like he'd have passed up the ones that said "Payments to Dubbya"

......and please don't get me started on what the motivations of the cash-strapped, politically biased,  owner of the Telegraph and Jerusalem Post might possibly be

Anyway, here are some more works of David Blair, who was pulled out of Baghdad on the 18th March.....

Everyone has been hunting for loot or evidence except, it seems, western intelligence agencies, which appear to have let this unique opportunity pass.
Click to expand...

More intriguing was intelligence gleaned from the Iraqi embassy in Moscow about a meeting between Robin Cook, then Foreign Secretary, and Igor Ivanov, the Russian foreign minister, in Feb 2000....If this was an accurate account of Mr Cook's words - and there is no corroborating evidence - he was considering a move that would have moved Britain dramatically out of step with American policy.
Click to expand...

I'm not supporting Galloway (who needs to swing), but I find this whole episode a bit convenient. Maybe if it hadn't of been the Telegraph, and maybe if we hadn't seen so much obvious bullsh1t and lies flying around, I'd be prepared to take this at face value....
He had bought a large map representing the sea,
Without the least vestige of land:
And the crew were much pleased when they found it to be
A map they could all understand.
S

I can't stand Galloway either, but if this is a deliberate attempt to discredit him it is serious for anyone who might disagree with Blair.

What happens if the next person is right and not a dichkhead like Galloway?

In one sense Galloway was right and this had nothing to do with WMD and liberation, and at least he has been consistent. However much we hate him Blair isn't ensconced in the Kremlin and doesn't have carte blanche to wage a dirty war against a member of the Government.

This is obviously a fit up though. A reporter finds incriminating intelligence documents, and is allowed to keep and use them, before the security services of the UK and US who are scouring documents for anything incriminating as well? No chance.

I would love it to be true, but don't believe it.

Don't forget though most importantly, that this is the Government who is spending hundreds of millions of pounds of 'our' money on enquiries to appease terrorists in NI, but is happy to engage in dirty tricks as it suits their own end.

Might this site, full of dissention about ****** Blair, be next in the dirty tricks campaigns? We can't allow it to happen to anyone, whowever much we might like it to.
S

I find it hard to believe too hence the above.
What really gets my blood boiling about him was his attitude to the guys and gals doing the dangerous stuff He couldn`t give a flying  F**k about anyone in Iraq especially British Army personell just himself.

And I do not believe that he adopts his position on behalf of his constituency - he is more likely to an SNP plant.
B

Can't someone with a bit of cash bring a private prosecution against him for treason?
Click to expand...

No, but I know a couple of geezers who'll take his kneecaps out for £500.
Always out numbered........never out gunned!
B

I'm no supporter of George, but there is a certain smell attached to this story.  It wouldn't be the first time that MI5 engaged in a fit up now, would it?  It's all a little to convenient for me.

All the same though, he's finished and whilst that may be considered a good thing, should the allegations end up being discredited a few years up the line, you'll have a pretty good idea on what this Governments attitude is on the matter of free speech.  George is just a gobshite lefty, who makes no attempt to hide it and is probably his own worst enemy, but if he's been fitted up, then Blair and Co are no better than Saddam and Co.........just a little more subtle.

Bet Clare Short's on her guard
Always out numbered........never out gunned!
J

Well come on Jake, doesn't it seem a little odd to you?
He had bought a large map representing the sea,
Without the least vestige of land:
And the crew were much pleased when they found it to be
A map they could all understand.

What would your first instinct as a Journalist be Jake, what with the whole ville crawling with spooks?
He had bought a large map representing the sea,
Without the least vestige of land:
And the crew were much pleased when they found it to be
A map they could all understand.
J

When we looked at the story in our daily briefing we were under strict guidance (with one eye on the lawyers) on what we could/could not safely comment on ...  :-/

What we're saying got's nothing to do with either a free press or hearing what we want to hear.
B

That's right Jake, nobody has had a dig at the journo here, but you don't have to be Sherlock Holmes to find the whole thing 'convenient', for Mr Blair and his 'close' friends.  Galloway has been an embarrassment to him for some time and has been a staunch anti war supporter.  What better way to discredit Galloway with both sides of the divide?   Nice and simple this one.  Even if it is a fit up, it'll never be proven and the end result will be the same.

To take  the conspiracy thread a bit further are the constituency boundary changes in Scotland that are about to happen just the normal course of events or designed to stop him being re elected?

"On the contrary, I have given my political life's blood to my fight for the people of Iraq."
Click to expand...

George Galloway vs Islam4UK...Seconds out