from Old English White to green moss and rust

I wouldn't know where to start to re-align that door trailing edge - the whole thing is quite a deep box section, isn't it? I'd be very interested to see how you do it. Also, I am shite at welding thin stuff, even though I use MIG. The only way I have had any success, is to keep the current high-ish (or I just get bird-shit) and try to lay down a load of spots which join up with each other. Any attempt at a normal run of weld, and I end up chasing holes. So any comments on that would be welcome too. (My current car, an '05, is so thin I may try using methacrylate glue to stick patches on when the time comes, and lots of underseal! We use this (expensive) glue at work - it's amazing stuff).

Mark_Addy said:
Any attempt at a normal run of weld,
Click to expand...

getting that crackle you hear when you have the correct wire speed and power setting is something you only learn by experimenting on scrap materials of the same thickness, those two settings combine to give you a good weld, All the other considerations, cleaning the material free of oil, rust, paint dirt ect, having a good earth, as close to the work piece as possible without it getting in the way, Then the comfortable posture to work back or forehanded, these are all secondary to the two correct settings, so practice and make notes, And if it's a running car, watch the fire hazzard!
thank you Gentleman, thank you

Grind the doorskin off and bash the fu&k out of the frame until it is a perfect fit and obtain and fit a new doorskin.
NULL

Back to the problem of the left door fit this morning, had a break from it Yesterday as it was feel good Thursday, where I get to run my 6km routine, after recovering 6 weeks from a Calf strain, been away from running so I'm returning to it step by step, turned 59 years young this June, so I'm happy to take it easy.

The door fit needs some careful analysis before I go on as it's something I haven't worked out yet, what's wrong, why won't the door fit, it should, but something is preventing it locking forward enough. I think I know what it is...

so to explain it fully I need to share some details with you all, starting with this, the screw plate, it's bent. But that's not the whole problem. Note the orientation and screw holes lettered A,B,C,D. This becomes more relevant later. 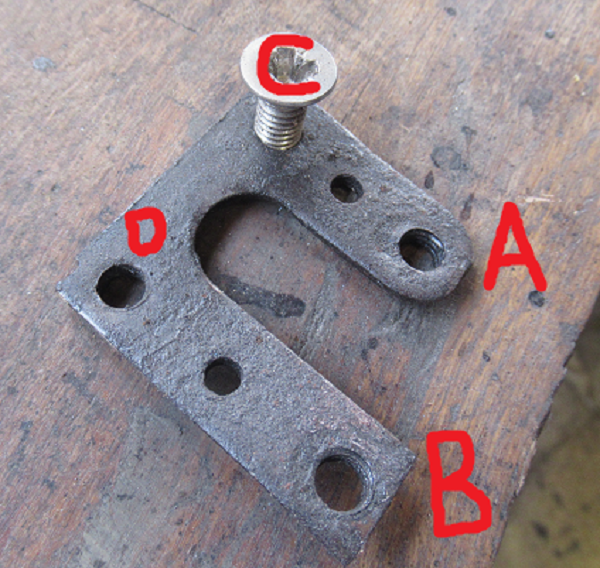 this plate is from the other side, A and B face the curve of the inner wing side.

the door removed I've fitted the screws and shown them in the order ABC, D has no role. Don't know why it's there to be honest. Note the fine cracks in the hinge housing between A & B. 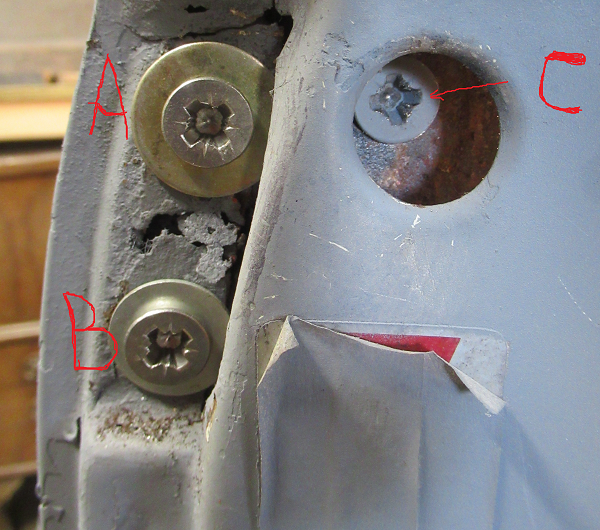 looking inside with the screws tight and the screw plate hard up against the hinge housing where it would be if the door were fitted and the hinges screws all tight. This shot is taken through the empty glove box housing looking toward the left side of the car with the removed door in the background, leaning against the wall.

The most important aspect of this image is gap L 40mm. 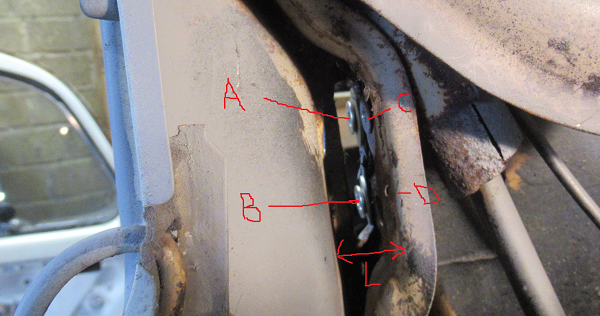 The span gap L on the other side is 35mm, I can't account for the size difference, but it has made fitting the screws and drawing the left door forward to close the gap at the front and relieve the tight fit at the rear door edge difficult, the door on the left is a replacement, hence the traces of red and blue paint. So what happened to the car to make the replacement of another door, impact? causing the Gal L and the cracks in the hinge housing? 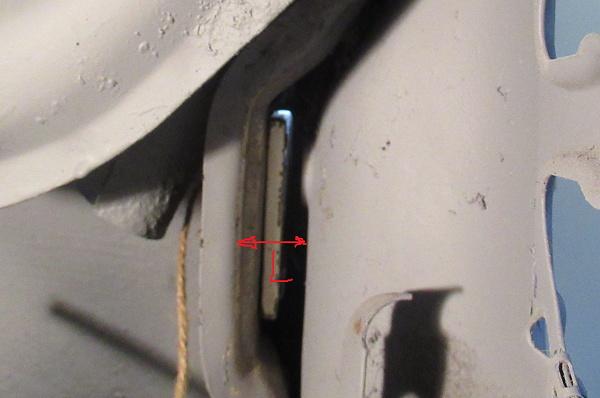 another snag is the tab that holds the screw plate in position have been crushed flat, hard to see them as they are behind that pipework. 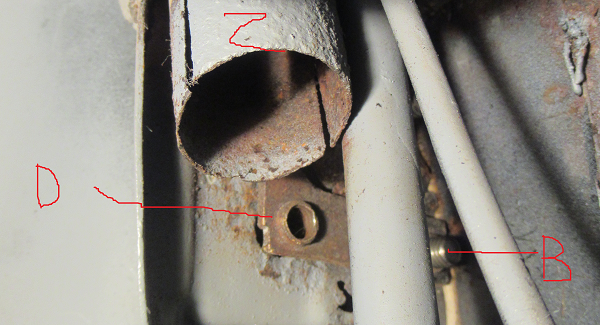 as you can't see them, I'll put my limited drawing skills to good use in my Bovington Tank Museum gift shop Notebook, David Wiley would be impressed. Such mechanical use for a Bovy notebook. 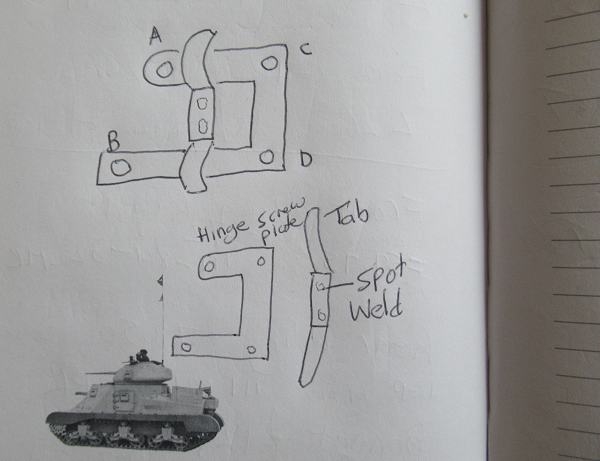 he'd be less impressed with some of the other stuff in there... 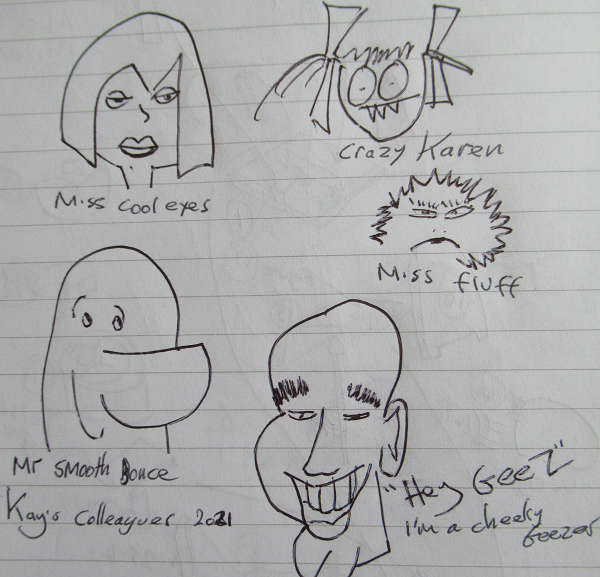 off with the door again. 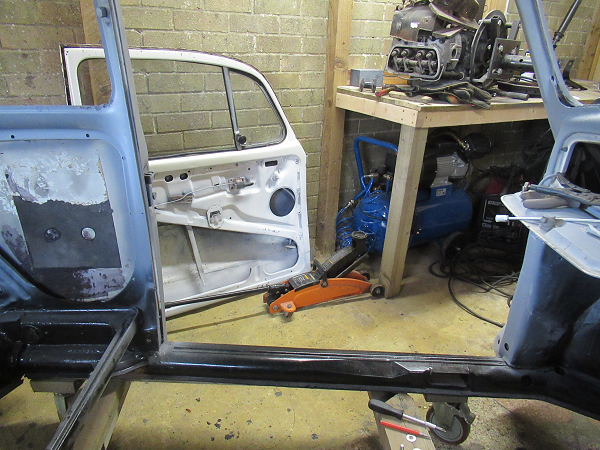 finally, after grubbing around blind, touch only, found the tab and bent it out with a screwdriver both ends, bit of a spine twist, but got there in the end. Here it is marked H. 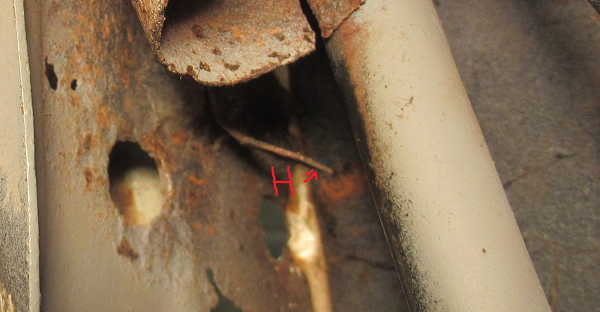 just need to slide the screw plate on, strung so it won't disappear all the way down the black hole, when, not if, I drop it. 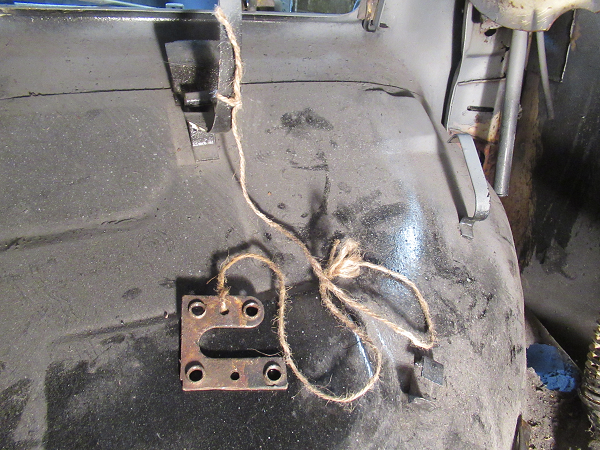 Plate back on using the tags but no dice, it just won't engage with the machine screws, they screw up when it's hand held, but in there it goes SNAFU. So what is it? 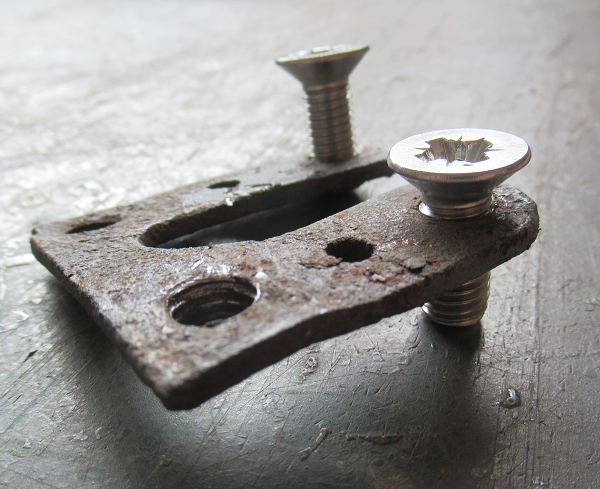 then I untied it and held it up for examination with an Odontology scale.

Will it not bend flat in the vice (I assume it's meant to be flat, that's why you've used a straight edge)? Perhaps (in your lower picture) three bits of 1/4" rod, two below (L&R) and one above (central), squeeze gently? I'm a tight arse, and often spend hours avoiding throwing something away which I could replace for not much money. Then again, my time isn't worth much and I tell myself it's the journey, not the destination...