I inherited an old photograph of this portly but proud gentleman, together with a battered but complete Adrian helmet from my father when he cleared out our great grandmother's house. 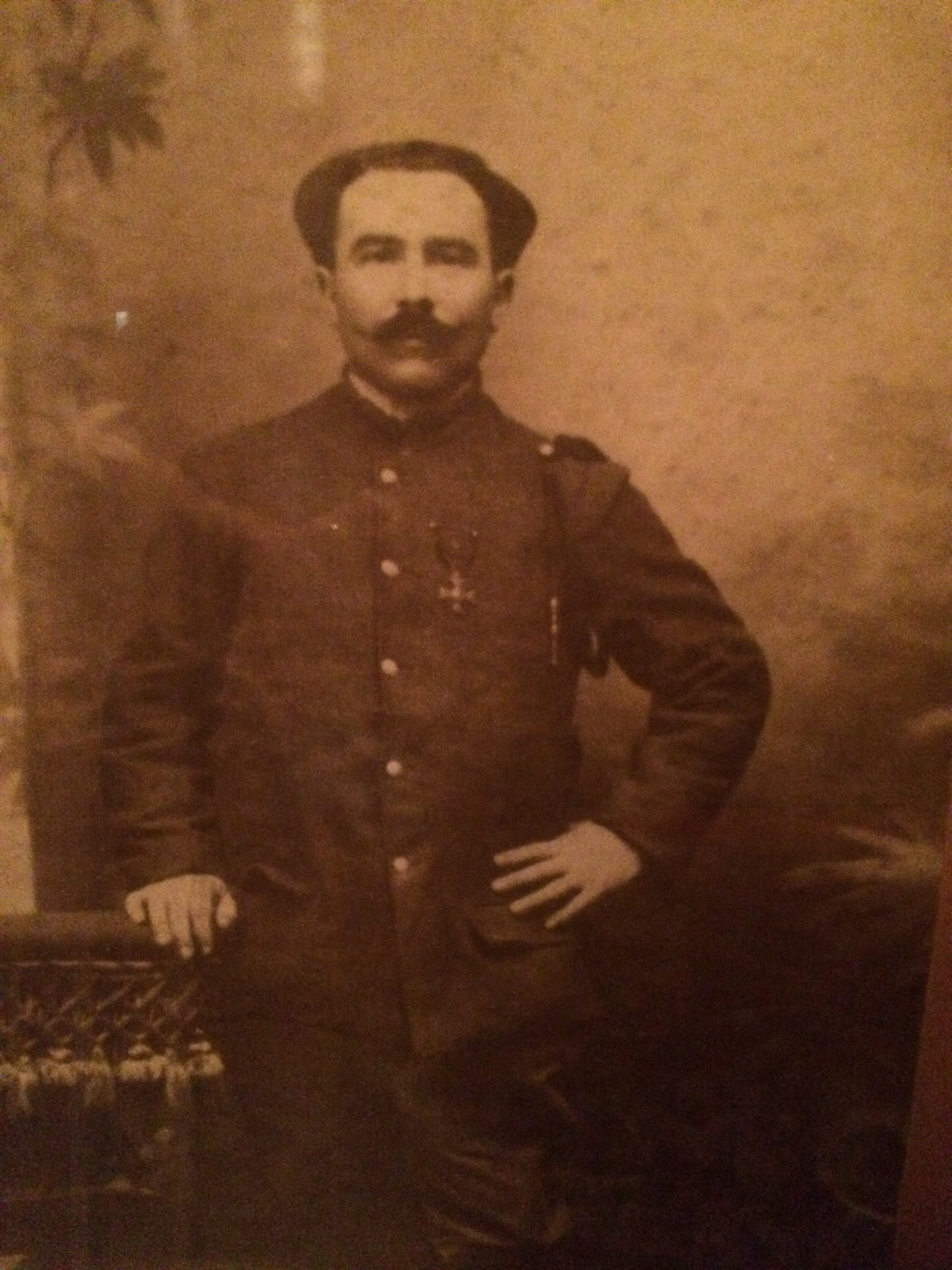 This is great grandfather Lazare, probably a few years after the great war. On his chest is the "Croix de guerre" medal with two bronze stars.

Since he was the only ancestor in the family with a known solid national service career I decided to follow up his service record. For a few years this would have meant going to Paris and manually trawling manually through archives but luckily all the records are now progressively being scanned at a Departement level so I finally hit the jackpot this year.

I thought it might interest a few Arrsers to see what was expected of a French serviceman at the beginning of the 20th century. Sadly the scan if copyrighted so I can't put it up here for all to see but I have translated the contents as literally as possible below:


Wounds/Citations/Medals
Wounded Charleroi 23rd August 1914 – Bullet in left buttock
Wounded Louvemond 20th December 1916 (Verdun) - Shrapnel in right arm
Wounded 23rd October 1917 in action – Sprained tibia (now called high ankle sprain)
Cited in regimental book n°20 5th May 1917
“Zouave congratulated for his courage and his vigour under fire during the attack on a heavily fortified enemy position on the 25th April 1917, despite coming under heavy machinegun fire. Was the admiration of his companions due to his brio, vigour and attitude before the enemy”.
Awarded the “Croix de guerre” with bronze star.
Cited in regimental book n°23 23rd November 1917
“Boldly assaulted a heavily defended enemy position on the 23rd October 1917 despite heavy barrage fire from the enemy. A fine example to his fellow Zouaves – Wounded in action”.
Awarded bronze star.
Awarded the military medal by presidential decree of 2nd January 1928

Yes, he was a Zouave, the gallant gents in the fetching red pantaloons, at least at the start of the war! The baptism of fire for the 4th was Charleroi. He appears to have been on the pinard or whatever moonshine they were brewing on the front at the end of 1917 when he suddenly grew balls of steel.

"La territorial" was composed of men between 34 and 49 responsible for a multitude of non-combat roles from simple guard duty to building fortifications and running military trains.

He would have not retained any kit or weapons after basic training and would have been in active reserve for 5 years living out his life in rural south-eastern France when mobilised. He was promptly given his kit and booted off to the front line ten days after reporting for duty. No wonder he got shot in the arrse at Charleroi

Now a little diorama I hastily put together: 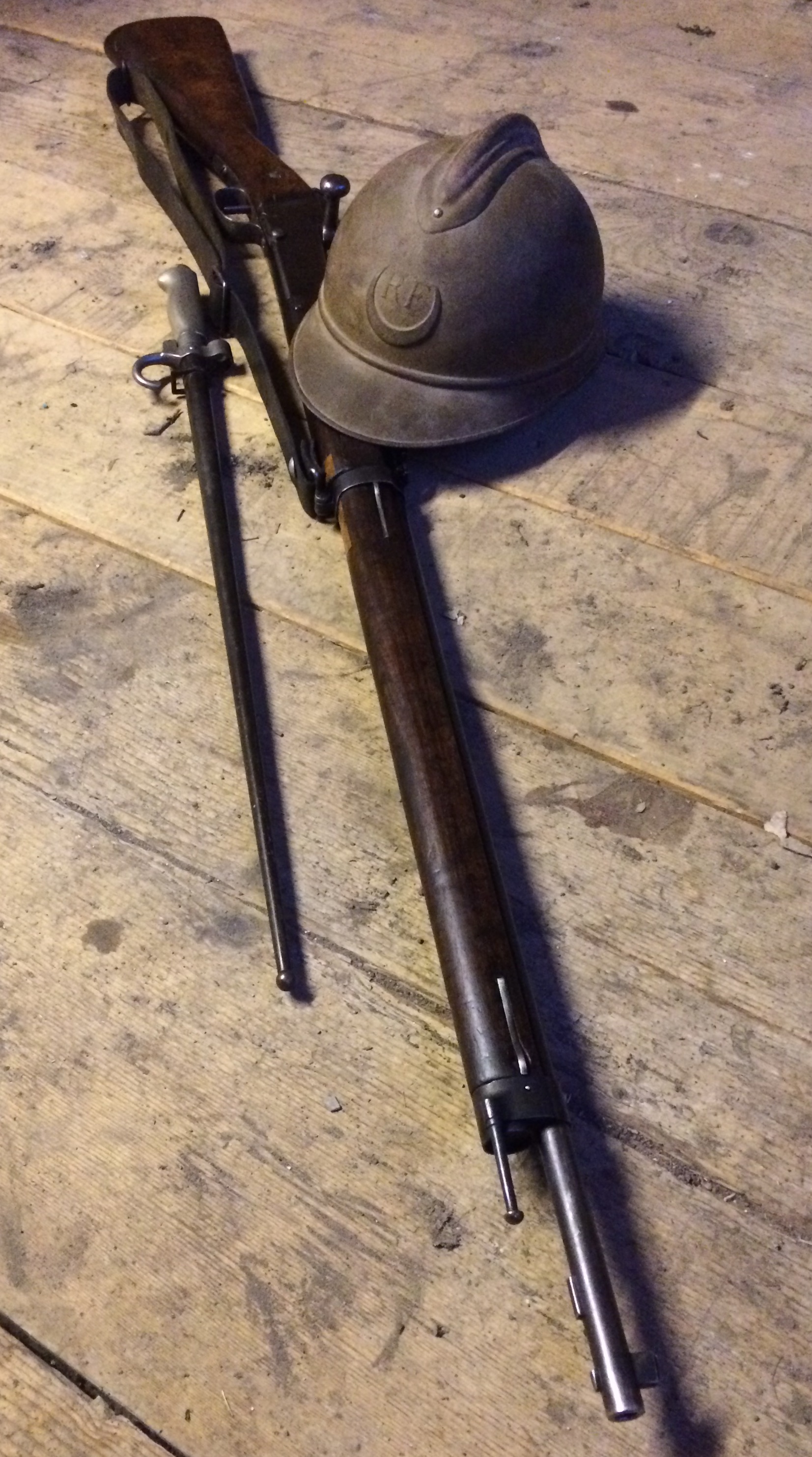 Family legend says that this is his lid and I have no reason to doubt it since it bears the correct crescent of colonial regiments. It still has the leather liner and corrugated metal plates between the shell and liner.

The great grandmother reputedly kept his dress uniform in a chest but it was not found after her death, it seems likely that she sold it to a local reputed uniform collector at some point. Sadly the collector also passed away and his collection dispersed.

Nine days at the front until he first picked up a wound, and that probably includes two or three days travel. His war certainly started with a bang/ouch...

Being given a rifle and told to crack in a full-on war on whilst trying to remember your basic 5 years ago probably has something to do with it. I'm guessing his red trousers rapidly became brown ones

Growing one entry at a time, keep checking back
D

Could you post the link for finding French military records online?

It's all a bit disparate at the moment.

A central resource is: Accueil - Mémoire des hommes
It also includes regimental journals which is where I was able to cross-check his citations.

For WW1 I found him through this portal: Les registres matricules

This story illustrates the fundamental difference between the French (and other) continental armed forces systems and that of say the UK, Commonwealth and US, with which we are more familiar.

UK/US/C'wealth - small, professional volunteer armies, supplemented by volunteers and then conscripts upon involvement in a big war.
France etc. - a period of universal conscription, followed by the possibility of mobilising millions of men at a moment's notice, albeit with (very) rusty military skills. Which is also why the French didn't throw obsolete stuff away, they just passed it down the hierarchy since they expected to be able to mobilise millions within a fortnight, something that is just not possible in the UK and US systems. On this latter point, look how long it took for the Kitchener Volunteers to be put in the line after a period of training.

What was the "6 years territorial service"? was it a bit like compulsory TA, odd weekends and weeks here and there? Or was it simply "on the list to be called up for rear echelon service at a moment's notice"?
Come visit my YouTube project: https://www.youtube.com/channel/UC9k2WzcJ1kUMl4KIwNQwrFA

I notice he did 2 years in the rear. Recuperating from wounds or was he training the next batch of recruits to be fed into the meat grinder of Verdun?

Book Reviewer
What was the French Army issue rifle at the time?
Lebel?

And why did they call the bayonet "Rosalie"?

Suspect he'd have gone into a bantam battalion in British service.
Last edited: 16 Jun 2016
'The really important fact about the English intelligentsia is their severance from the common culture of the country' George Orwell

Book Reviewer
A most informative article
he was Lucky to Survive Verdun, many brave French Soldiers lost thier life in that place
NULL

Goatman said:
What was the French Army issue rifle at the time?
Lebel?

And why did they call the bayonet "Rosalie"?

Suspect he'd have gone into a bantam battalion in British service.
Click to expand...

His height was not out of the ordinary back then. I'm only 1.75m and tallest in my family [emoji1]

Yes he would have been equipped with a Lebel, hence the picture.

No idea why it was called Rosalie and there is some doubt as to whether the term was a post war nickname which may have come about due to a popular song at the time, a bit like the creation of the nickname Brown Bess. 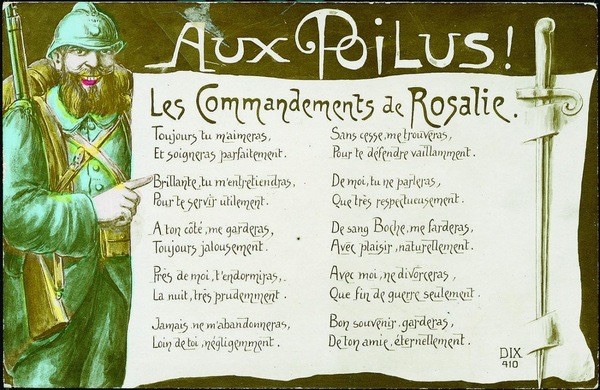 Goatman said:
No disrespect Croque, but at 1.58 m he was un p'tit poilu hein?

Suspect he'd have gone into a bantam battalion in British service.
Click to expand...

I would have thought being a shortarse is a positive advantage in trench warfare! And less digging required...
https://www.arrse.co.uk/community/members/mothman.74768/

Joshua Slocum said:
A most informative article
he was Lucky to Survive Verdun, many brave French Soldiers lost thier life in that place
Click to expand...

The French Army was bled white at Verdun in a German attempt to break them utterly. Had it done so, the allied entente would fail and France would have made a seperate peace with Germany.

French High command shared the misery by rotating many units through the sector during the 303 day battle when their casualties reached 50%. This probably prevented the collapse of that front more than anything else.
https://www.arrse.co.uk/community/members/mothman.74768/

Book Reviewer
I believe French bayonets were traditionally called "Rosalie", IIRC its even mentioned in one of Flashman novels as in "Rosalie's breakfast*". And upon checking it appears French Poilu's named it in honour of the Virgin of the Southern French town of Bayonne. Where it is considered during the siege in 1655, the Bayonet was first used/invented after running out of powder the locals thrust long hunting knifes into their muskets.
Getting high on Greggs, Irn Bru and brufen.

Croque_Monsieur said:
His height was not out of the ordinary back then. I'm only 1.75m and tallest in my family [emoji1]
Click to expand...

You do indeed tower over your father, and you're not exactly a towering mountain of a man
Come visit my YouTube project: https://www.youtube.com/channel/UC9k2WzcJ1kUMl4KIwNQwrFA

Serious point - at this stage, most of France was populated effectively by rural peasants - think Norfork, from where many of the bantam batallions were raised. So they were often short, for exactly the same reasons as the Norfolk farmers were.
Come visit my YouTube project: https://www.youtube.com/channel/UC9k2WzcJ1kUMl4KIwNQwrFA

His education level is indicated to be the legal minimum, again not surprising for rural France where you were needed on the farm/down the mine etc.

B
Research help on WW1 soldier.