Fire Force is the autobiographical account of a young soldier who served three years in the Rhodesian Light Infantry. The author, Chris Cocks, fought in the late 1970s in the Rhodesian Bush War and his story is simply epic

I've read a number of accounts of the Bush War, some general history, some biographical. This is easily one of the best first-person accounts and, like so many stories written by soldiers is by turns, sad, funny, visceral and blunt. This is very much Cocks' story and does not present the fighting nor the lifestyle from any other perspective but his – a trooper and then a JNCO in the RLI.

The lifestyle is unrelenting. This is not the story about a six-month tour but about a seemingly never-ending war where the RLI provide a nationwide quick reaction force and seem to be permanently in action with only occasional respite. Seemingly always outnumbered and with contacts frequently taking place at 1-2m, you have to admire the RLI soldiers – coming from a wide range of backgrounds – and their consistent return to action. His descriptions of sweep operations in close bush, hunting an enemy who always seem to have the advantage of being static, are stark and graphic. You can sense the fear and the courage of the RLI troopers in dealing with this and their determination to win. 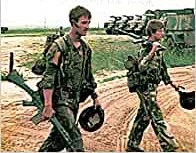 Cocks captures the different national traits of his fellow soldiers (there is a wide range of them in the RLI), their individual personalities and their varied speech superbly – having a soldier's sense of humour as a reader occasionally helps – and also the effect on the different soldiers that he fights alongside (and sometimes with). This is perhaps the saddest part: the long-term impact on the physically wounded; the psychological impact on both the author and his comrades (spoiler – there are a number of post-war suicides); and the the descent into a casual acceptance (at the time) of killing routinely – this including the execution of prisoners and the, sometimes accidental, death of civilians

Alcohol figures prominently in the narrative and then drug use becomes quite normal for the author and a number of his friends. This is evidently a way of taking the edge off for them as there seems to be no respite apart from occasional R&R periods. He quotes at some length from contemporaneous letters to his fiancée and these give a clear insight into his way of thinking.

Quite simply, I recommend it to everyone. It's a superb story from which you might learn more about the fighting in Africa in the 1970s, something about white Rhodesia at this time, tactical lessons that could be applied now, enjoy a cracking story that is well told or perhaps a combination of some or all of these.

It is like so many from that period, deeply personal accounts of a people who were fighting for they felt was their home, their way of life, their loved one’s safety from the onset of communism and terrorism.

The stability and productivity of that piece of Africa was indisputable. Yes it had a bloody history but what country in the world does not have a history of violent conflict...other than those areas of the planet where the climate is so extreme that it takes every single effort simply to survive.

The settlers who had carved that nation out of bush with their blood sweat and tears now had second and third generation to whom this was their land. They answered the call to serve their country and they stepped forward. Many were pretty much straight from school, they had probably done cadets, and National Service, for others this was National Service, and a few their profession.

Fire Force the name of his book was taken from the Operational Strategy of vertical envelopment of units of the enemy when discovered. The enemy were operating as small, sometimes not so small guerrilla units operating in and from the Rhodesian Bush. The Rhodesian Army was small, the area they had to cover was huge and Fire Force developed into a highly successful counter guerrilla warfare concept.

Units of the Rhodesian Light Infantry, and of the Rhodesian African Rifles were teamed up with 7 Squadron Rhodesian Air Force and airlifted in 4 man sticks in Alouette III 'G cars', armed with a side mounted GPMG, to contacts where they would be strategical inserted around the enemy from the various Fire Force Bases around the country.

The Fire Force Commander normally a Major would direct in a 'K Car' an Alouette III fitted with a Matra 20mm Cannon. Later an Alouette III K Car ‘Dalmation' was fitted with quad mounted .303 from a Vampire which was very effective, along with some 8 Squadron Cheetahs or Ex Israeli Augusta Bell 205A's that Jack Mulloch had flown in. Ex Israeli and completely rebuilt by the Rhodesian Air Force Technicians these could carry more troopers with the bigger contacts towards the end of the Bush War.

In larger contacts some para units would be flown in to the contact area then dropped from 3 Squadron Dakotas to act as a sweep line and the helliborne units placed as stop groups in ambush positions. These airborne units were sometimes doing up to three operational drops a day and became some of the most intensively used paratroops in the world.

JRT Wood’s description probably the most comprehensive there is.

Living in Kenya and with a number of relatives in the Rhodesian Forces the Bush War was of particular interest.

By coincidence it was in this little lot delivered from Amazon yesterday. I'm finding myself getting more interested in post-war Africa as "Mandela good - saffers bad" was as much education as I got about it at school in the 80s and early 90s.

Resasi said:
along with some 8 Squadron Cheetahs or Ex Israeli Augusta Bell 205A's that Jack Mulloch had flown in. Ex Israeli and completely rebuilt by the Rhodesian Air Force Technicians these could carry more troopers with the bigger contacts towards the end of the Bush War.
Click to expand...

The Augusta Bells were mainly used on external operations supporting the Rhodesian SAS. This enabled Junbo Fireforces to be introduced in 1979 (double a normal fireforce).

Resasi said:
n larger contacts some para units would be flown in to the contact area then dropped from 3 Squadron Dakotas to act as a sweep line and the helliborne units placed as stop groups in ambush positions.
Click to expand...

The whole of the RLI was para trained in 1977 with many being trained in South Africa by the SADF. From 1977 a RLI or RAR Fireforce would consist of one K Car, three troop carrying G cars with three 4 man sticks, One Dakota carrying 4 or 5, 4 man sticks of parachutists and one twin engined Lynx Cessna ground attack aircraft armed wit guns and sneb rockets. Further support of Hunter ground attack aircraft or Canberra bombers could be called in if available from the Rhodesian Air Force base at Gwelo in the middle of the country.

This Thames TV documentary first shown in 1978 shows a Fireforce from A Company 1 RAR in action.

Another video explaining the Fireforce concept. The full video is about 45 minutes long and comes with the book of the same name. Well worth the money.


Chris Cocks talking about his experiences in the RLI in a podcast.

Another book you might find interesting is '19 With a Bullet' by Gungy Korff. Set around the same time near the end of Rhodesian Fireforce ops, but across the way in Angola and SWA.

Similar set of accounts and experiences but in a more mechanised role than Cocks'.
"Justice tastes like hairy Bovril!" - The Righteous RTFQ

Lardbeast said:
Another book you might find interesting is '19 With a Bullet' by Gungy Korff. Set around the same time near the end of Rhodesian Fireforce ops, but across the way in Angola and SWA.

Similar set of accounts and experiences but in a more mechanised role than Cocks'.
Click to expand...

I have that book in my collection. Wasn't he a Parabat?

cowgoesmoo said:
By coincidence it was in this little lot delivered from Amazon yesterday. I'm finding myself getting more interested in post-war Africa as "Mandela good - saffers bad" was as much education as I got about it at school in the 80s and early 90s.

I suspect that most kids being educated now would know nothing about those times.

That's a real shame imho, as they don’t know about the various black organisations with Marxist ideology, and just how rotten (massive understatement there) those groups were once they seized power.

In todays U.K. it seems that many think it’s ‘racist’ not to support the latest black group with Marxist ideology!
184461 said:
'It's called need to know/circle of knowledge for a reason BTW'
He isn't in the circle, he should NOT be told anything!
When trolls tell us Novichock kills in seconds they don’t mention Andrei Zheleznyakov. He was exposed, lived for ages and the soviets documented the whole thing,