Following on from Bad CO’s review of the Elliot Brown Holton Professional (available here), I was offered the chance to review a different watch from their extensive range.

Very generously they said “just pick whichever one you want and we’ll send it out.”

A quick glance through their website raised some serious levels of want. Everything on there looks the business and it was a very tough decision to choose which one I’d like to put through its paces.

The Bloxworth range alone comes in 15 different colour / strap combinations. There are currently 76 different watches available on their website and that’s before you even begin with special editions and collaborations.

Eventually I settled on the Bloxworth with a black face, blue bezel and black rubber strap. 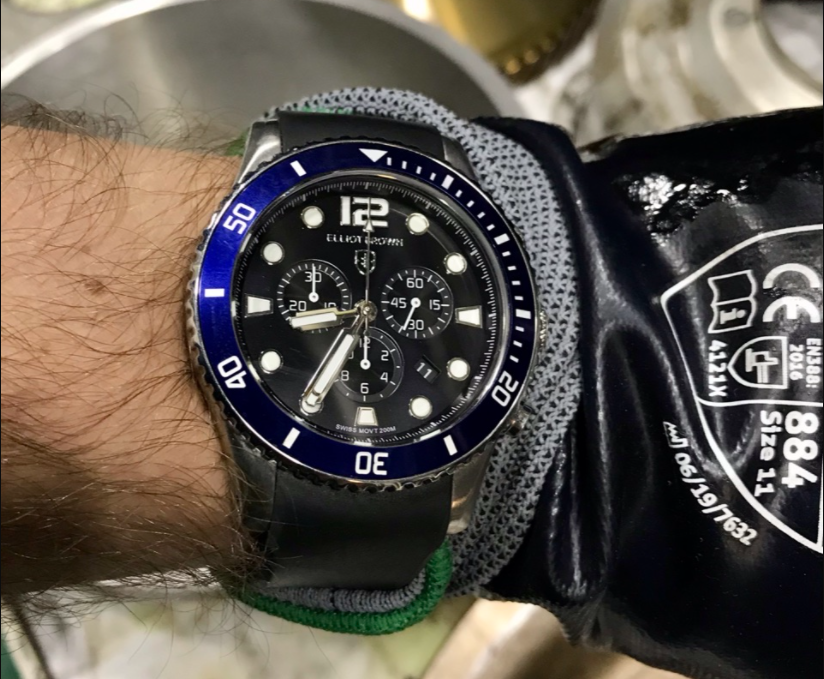 Now I’ve been holding off on doing this review for a while. I’ve been trying hard to come up with something interesting that does this timepiece and Elliot Brown some justice. Bad CO has done a sterling job reviewing the Holton, with some great phots of it under the sea, diving on wrecks and what not. I wanted to do something equally as cool.

Turns out testing a watch is quite difficult. I mean what exactly do you test? It tells the time and er...... has a little window for the date? It’s even more difficult to get interesting action phots of a watch that aren’t just...... well...... pictures of a watch.

My usual gig of reviewing boots and outdoor clothing is a piece of piss in comparison. Just go for a walk up a mountain, see how much they leak and how much your feet hurt afterwards. Job jobbed.

I had a few Naval adventures planned that would potentially be good hunting ground for content, but Covid put paid to all the sexy stuff this year. 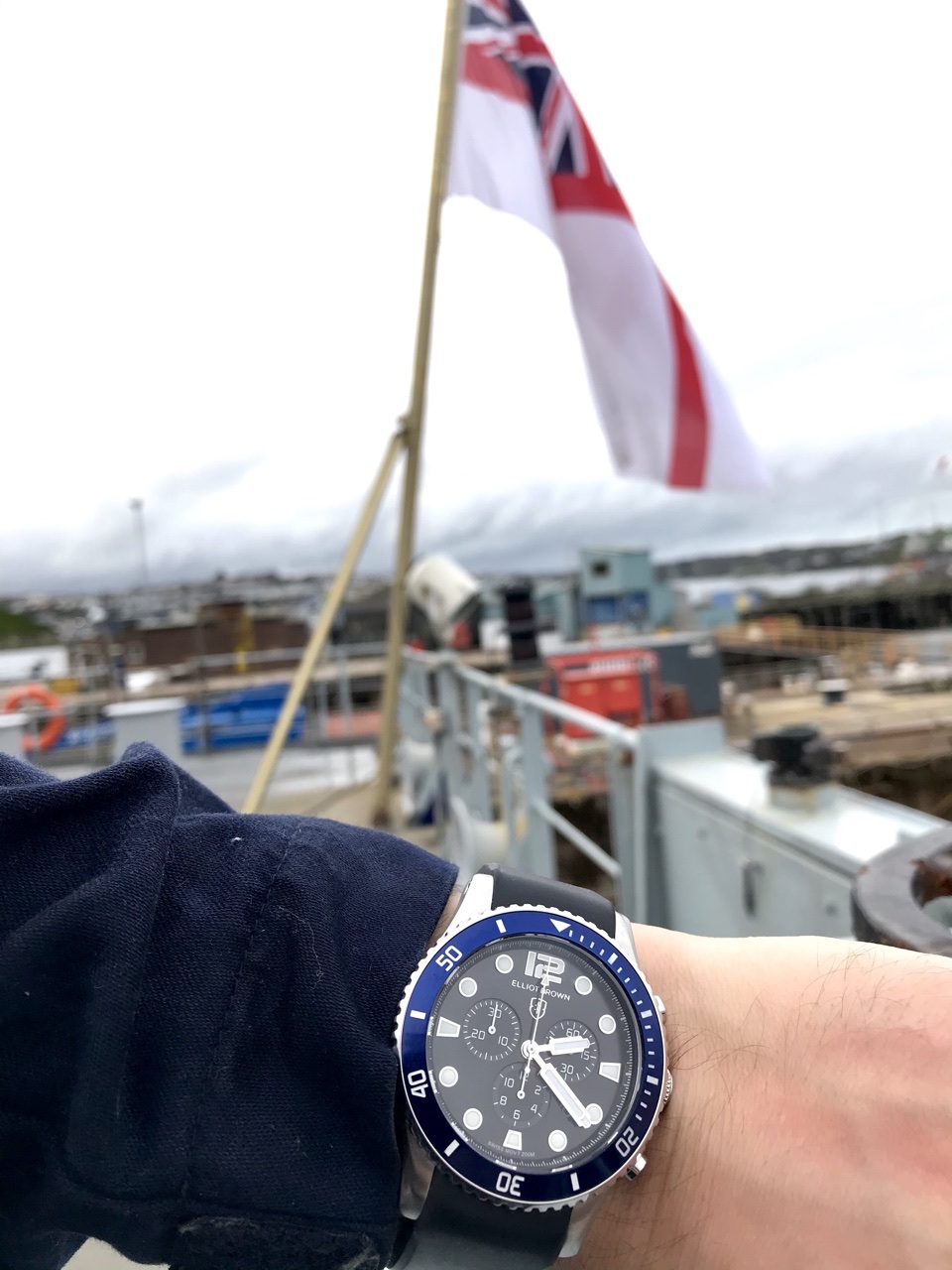 No razzing around on speedboats for me.

I’d have to settle with a fairly run of the mill engineering trip on an RN survey ship, some range time and just the normal stuff I get up to on a day to day basis.

Ian Elliot and Alex Brown both come from watchmaking / engineering backgrounds. The roots of the business can be traced back to cool 90s surf and extreme sports watch company Animal (remember them?)

With Elliot Brown, they wanted to make something special. Watches with extreme durability, attention to detail and a typically English character, all at a very reasonable price.

Watches so good, they put their names on them.

The brand has certainly caught my attention a few times, with their interesting collaborations with Land Rover, Mountain Rescue, RNLI and various sneaky beaky military units (Elliot Brown are based in Poole and have recently made an issue watch - it has an NSN and everything - for a mysterious un-named elite unit. Wonder who that could be?)

They were definitely on my radar and I certainly fell very much into their target audience of being a bloke, who likes watches and lives a reasonably active lifestyle.

Now it’s no secret that I once worked for a big luxury goods conglomerate who’s core business is luxury watches. I’ve been to a few watch factories and service centres over the years. I’ve seen watches that cost more than a house. I was looking forward to seeing if a smallish English brand could stand up to the heavy hitters in Switzerland.

And so I awaited eagerly for the watch to arrive. Like a kid waiting for Christmas morning.

It didn’t disappoint. It arrived in a nice quality presentation box with the usual strap tools and other bits and pieces. They also chucked in a few stickers which I’ll slap on the Landy so people think I’m one of those brand ambassadors who gets paid to put stuff on Instagram.

Point of note, this is a big watch. 44mm case and 13mm thick. Like the old rat pack Yorkies, this is not for girls or people with weak wrists. (Edit: Ladies and those wanting something a little more elegant should look at the Elliot Brown Kimmeridge collection).

It feels absolutely solid. I mean you could use it as a weapon if nothing else came to hand. More about its durability and suitability as an improvised weapon in a sec.

Looks wise, this is everything I would ever want in a watch. I mean it’s beautiful. Stunning brushed case, deep blue bezel. This will look good with a suit and tie or a wet suit. And as mentioned above, their range is so extensive, there is something there for everyone and every occasion.

It’s very eye catching and a bit different. I could see some of the watch fiends at work checking it out in meetings. As a smart watch it really works. A colleague of mine who owns two Panerais even commented on it. High praise indeed.

Don’t be fooled by the good looks and charm though. These are not dress watches and have been built for a purpose.

Before getting this watch, I did my due diligence and Googled the shit out of the company to get an idea of what they were about.

Quite modestly, they don’t really hark on too much about some of the destructive testing they do to their watches, but other people on the internet do.

Every watch is pressure tested 3 times to at least 200m.

Watches are shock tested by having a 3kg stainless steel mallet dropped on them.

They stuck one watch in the bottom of Poole Harbour for 6 months to see how it would fair submerged in deep cold salt water.

They even stuck one to the front of a racing yacht and sailed 40,000 miles around the world, over the space of a year just to see what would happen.

Of course the watches passed all the tests with flying colours.

They wanted these watches to be capable of withstanding anything their owners could put them through. Climb Everest? Jump out of a plane? Deep sea dive? No problem. What you’re getting with an Elliot Brown is something that is completely reliable and durable in any situation.

This is important for me. I’m an engineer who is either sat at a desk in an office environment or covered in nasty oils and chemicals taking stuff apart. I spend a lot of time onboard Royal Navy warships with narrow passageways just full of metal obtrusions that have been specifically placed to smash your watch on. I live on a farm in the Lake District. When I’m not at work, I’m outside in all weathers riding quad bikes up mountains and chasing sheep. But I’m also a flash ****** who likes nice cars and expensive clothes.

I think I’ve found the perfect watch for me. Something at home in every situation I find myself in.

Every watch I’ve ever owned is scratched to shit and showing years of abuse. This is the first one I’ve owned that I feel totally confident in not being able to break. To create a watch that couples this durability with looks that impress in a board meeting is quite an achievement.

I’ve had this watch for nearly 3 months. Despite being bashed about on the farm, on a ship and during an ill fated Land Rover adventure that resulted in some hasty repairs in the pissing rain, there isn’t a scratch on it.

Movement - Ronda Calibre Swiss Quartz. As used by Tag Heuer, Raymond Weil, Victorinox and many others. Fans of automatics can go for the Elliot Brown Tyneham at £845. Personally I have absolutely no beef with a decent Quartz movement, especially one that’s used in 4 grand Tags. They keep better time anyway.

One directional bezel - a nice safety feature and a bit of attention to detail. Means if you accidentally knock the bezel while diving and using it as an oxygen gauge, it won’t show you’ve got more air than you actually have.

Massive love for this watch and Elliot Brown in general. A huge thanks to them for the opportunity to test this.
Last edited by a moderator: 21 Dec 2020
Click to expand...

· From Getting high on paint fumes in the Focsle Locker.
NULL
Kit Reviewer Book Reviewer

Nice watch and good review. Does the emergency anchor on your wrist in photo one come with the watch or is it hidden code for something

jmb3296 said:
Nice watch and good review. Does the emergency anchor on your wrist in photo one come with the watch or is it hidden code for something
Click to expand...

It’s a fashionable bracelet that I wear from time to time because I am cool.
One cannot begin to fathom the immensity of the **** I do not give.
J

I brought the Holton on the strength of the COs review. Its a brilliant bit of kit. Not as blingy as the Bloxworth, which I looked very closely at. I also paid a visit to the gaff in Hamworthy, excellent service from the girls there.

jinxy said:
I brought the Holton on the strength of the COs review. Its a brilliant bit of kit. Not as blingy as the Bloxworth, which I looked very closely at. I also paid a visit to the gaff in Hamworthy, excellent service from the girls there.
Click to expand...

I’m hoping to pay them a visit once all this Covid nonsense is over. Already got my eye on another one.

I love the Holton and that was originally the watch they wanted me to review, but I thought it was a bit pointless since Bad CO had already done it.

Gotta say the Bloxworth is more me. It was a massive struggle choosing which one to go for.

One cannot begin to fathom the immensity of the **** I do not give.
J

Ravers said:
I’m hoping to pay them a visit once all this Covid nonsense is over. Already got my eye on another one.

I love the Holton and that was originally the watch they wanted me to review, but I thought it was a bit pointless since Bad CO had already done it.

Gotta say the Bloxworth is more me. It was a massive struggle choosing which one to go for.
Click to expand...

Bet it was a struggle. It was form me, they had a load of what looked like a jewellers order in a Pelli Case, a good selection of the range. My wallet was itching my right but cheek.

Just wanted to pipe up and say that if anyone is interested, Ian Elliot did an H-hour podcast, which I found interesting
NULL

Ravers said:
It’s a fashionable bracelet that I wear from time to time because I am cool.
Click to expand...

really ? I thought worn on the left wrist it indicated your love of semen or something...
Black Life's Matter....... but not to me
J 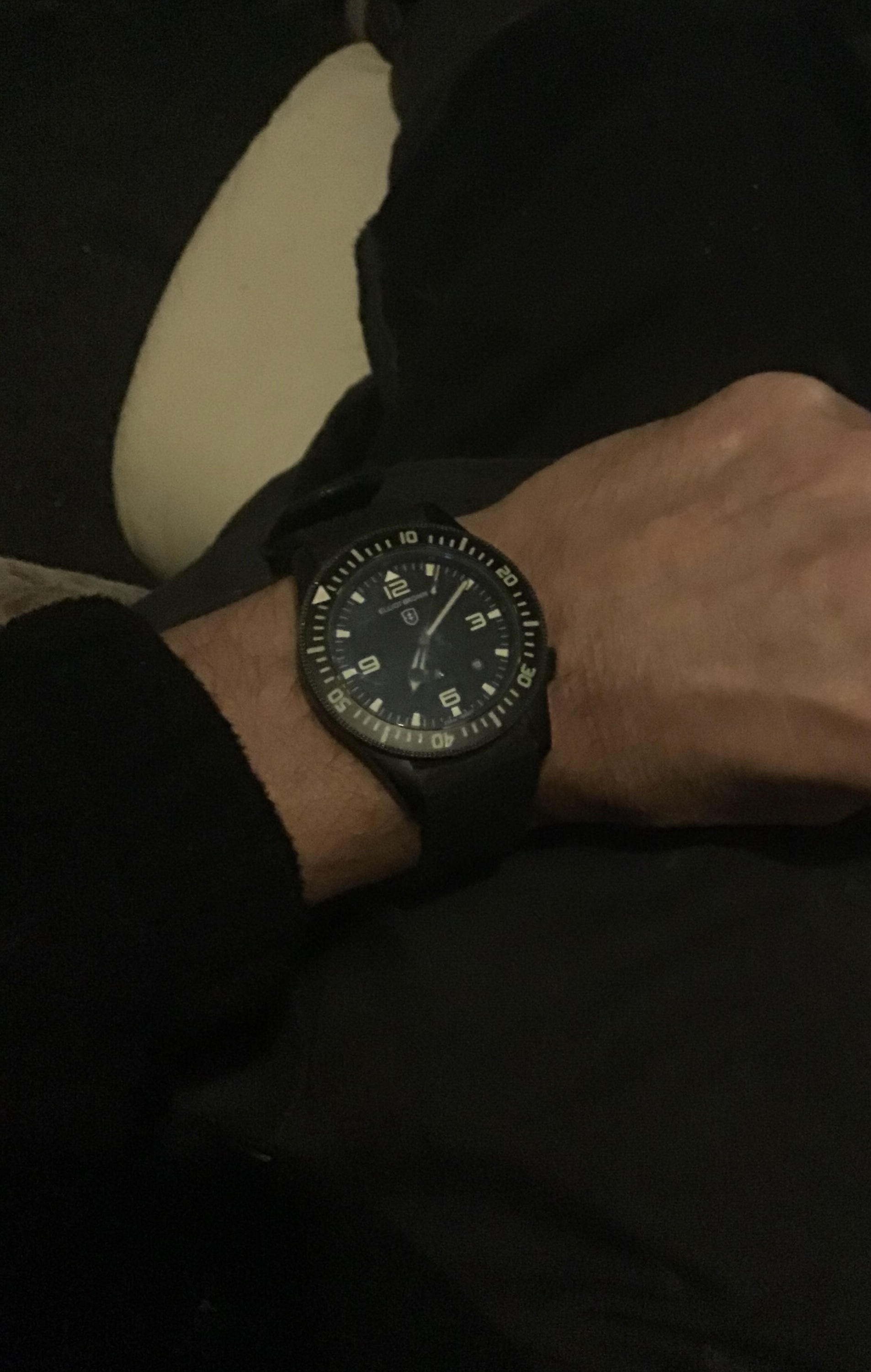 thought I’d show off my Holton. It’s been on my wrist near a year

A review of the KoreTrak Smart watch ?