This figure kit represents Ripley at the final scene in the movie Alien (1979), as Ripley, played by Actor Sigourney Weaver, as she discovers the Alien creature in the Space ship lifeboat with her, she gets into a small space suit room and gets dressed to blast the Alien out of the airlock. 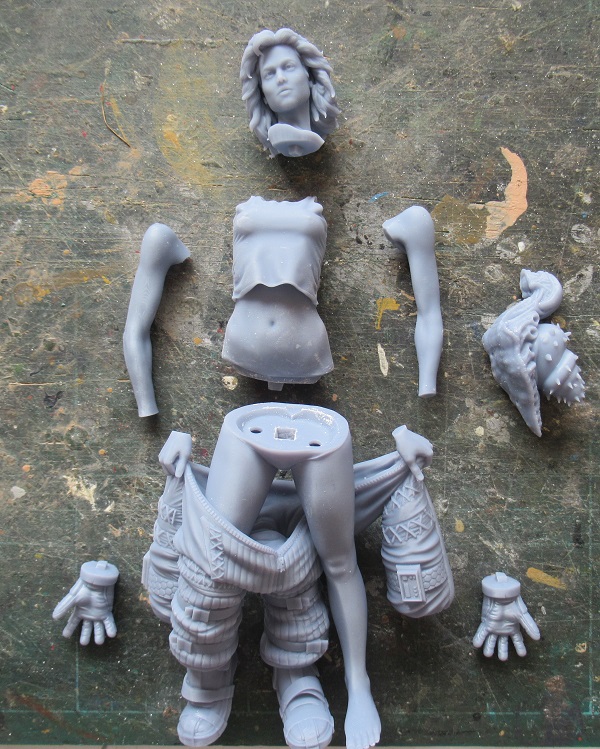 the parts breakdown is shown above, lets start with the head to body fit. The face is an uncanny likeness to the Actress, though it does look relaxed, and if you've seen the film, you know she was far from that. Though she does have an intensity that seems well sculpted. 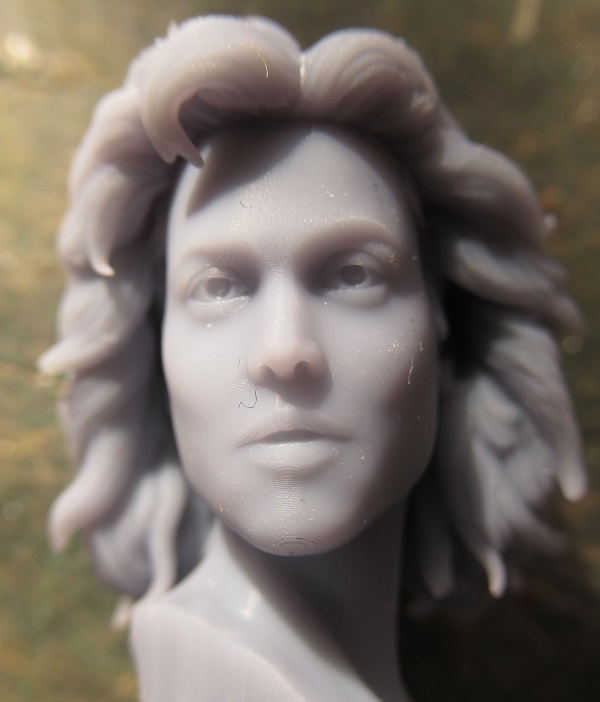 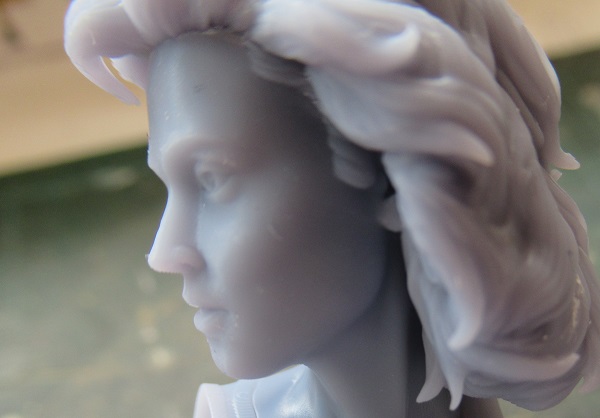 fit of neck to body is an amazing join, no fettling needed. 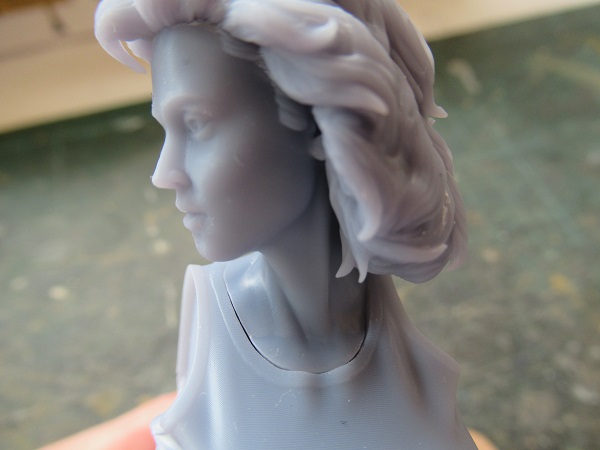 the arm joins are just as good. 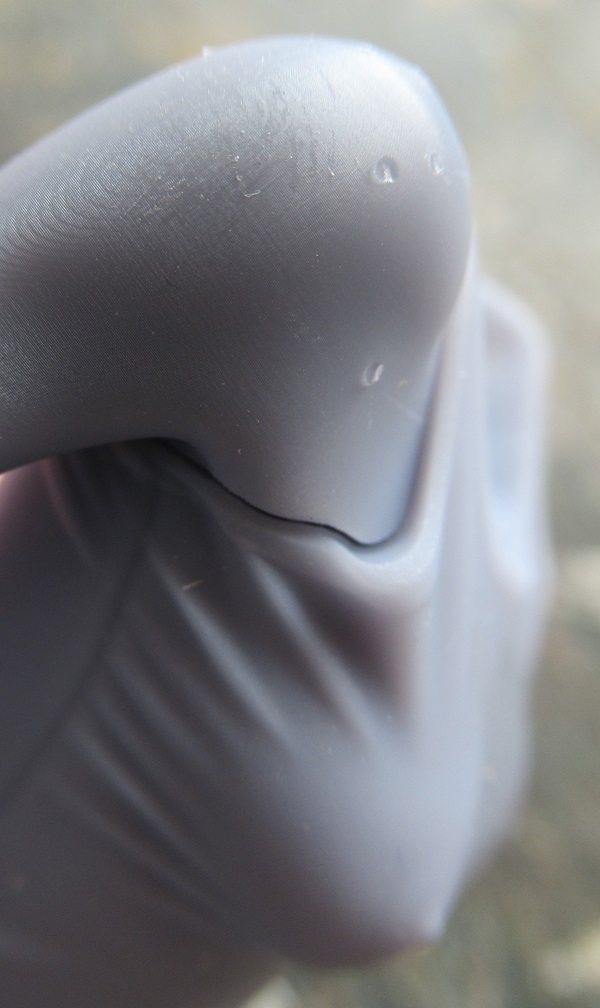 there is not one fault, cast line, mold line, blemish or flash line. An amazing quality casting.
There is some fettling needed at the major body join . The plug and inner mating surface needs sanding back to get rid of the join gap. This join is exceptionally well placed, utilising the natural join line between the clothing and skin. 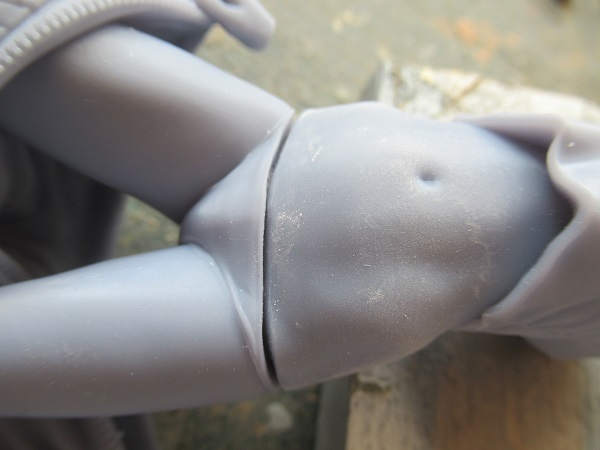 the only way to reduce that gap is to sand down the plug and inner join mating surface shown here. 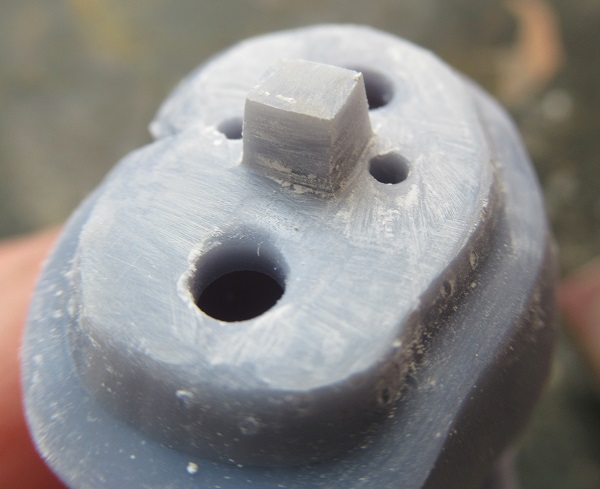 the gloves to space suit fit are a bit tight, they also need a small amount of sanding to get a snug fit. 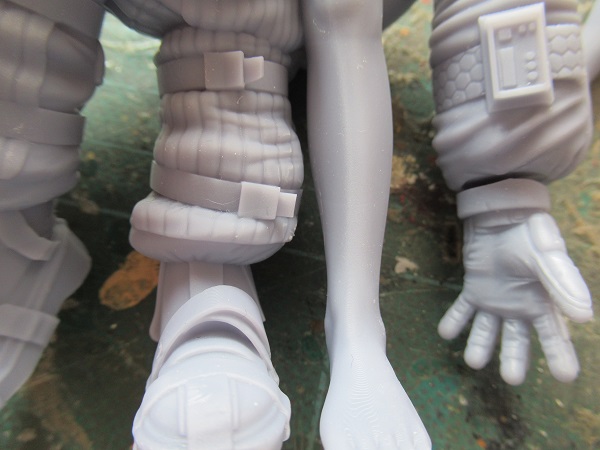 As the resident pervert, are you going to include a camel toe? Just asking.
I take pride in my spelling and grammar incompetence and innate ability to wind up fellow Aarsers with my command of the English language and incompatible spelling.

my seller got good feedback on e bay, don't know who produces this kit, is it a knock off of an original? if it is it's very well done. the seller placed two tiny fragile rings that cover the joints at both wrists. I'll have to watch the film clip carefully to see if they are on there and if they are, what are they. 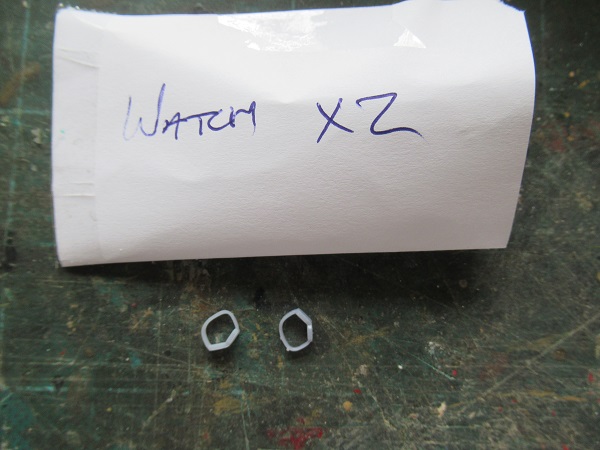 keep forgetting I now have macro, this is 5mm across each watch face 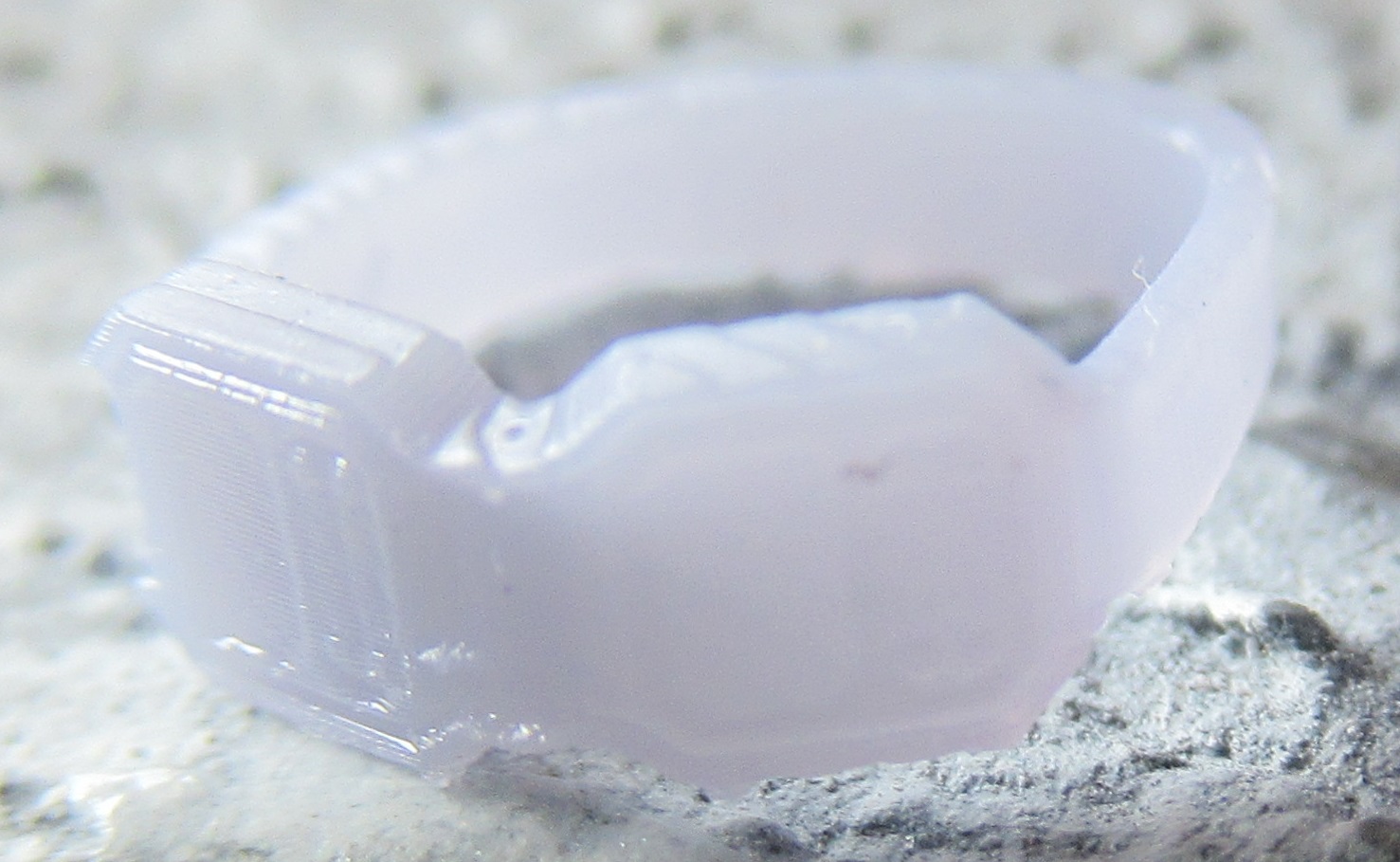 a detailed viewing of this clip shows she only has a watch on her left wrist, her right being bare, so I'm going to have to cover that left wrist join very carefully.

Stunning sculpt. The face and hairstyle are spot on.
In the career of glory one gains many things; the gout and medals, a pension and rheumatism....all of these fatigues experienced in your youth, you pay for when you grow old. Because one has suffered in years gone by, it is necessary to suffer more, which does not seem exactly fair.

Spookily good actually.
Had a look, seems to be quite a bit of diorama available.
​
B

That is not an actual sculpt. The master at least is done on computer with Zbrush or similar program and 3D printed.

Yep, that took less than a minute to find once I googled "Zbrush ripley" Whoever did the the original really knows their stuff though.

Will you be needing a couple of 'Rivets, Extra Large, White Vests for the use of'?
NULL

Rodney2q said:
Stunning sculpt. The face and hairstyle are spot on.
Click to expand...

amazingly, you do get a better impression of the casting when it's in primer, reflects light better. 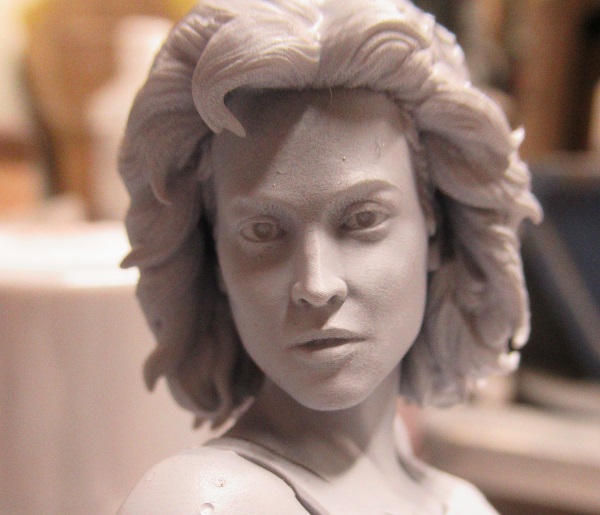 SPROCKET321 said:
a detailed viewing of this clip shows she only has a watch on her left wrist, her right being bare, so I'm going to have to cover that left wrist join very carefully.

She's wearing a watch?
The stopped clock of The Belfast Telegraph seems to indicate the
time
Of the explosion - or was that last week's? Difficult to keep
track:
Everything's a bit askew, like the twisted pickets of the
security gate, the wreaths,
That approximate the spot where I'm told the night patrol
went through.

the wrist watches cover the join, so I've used both. 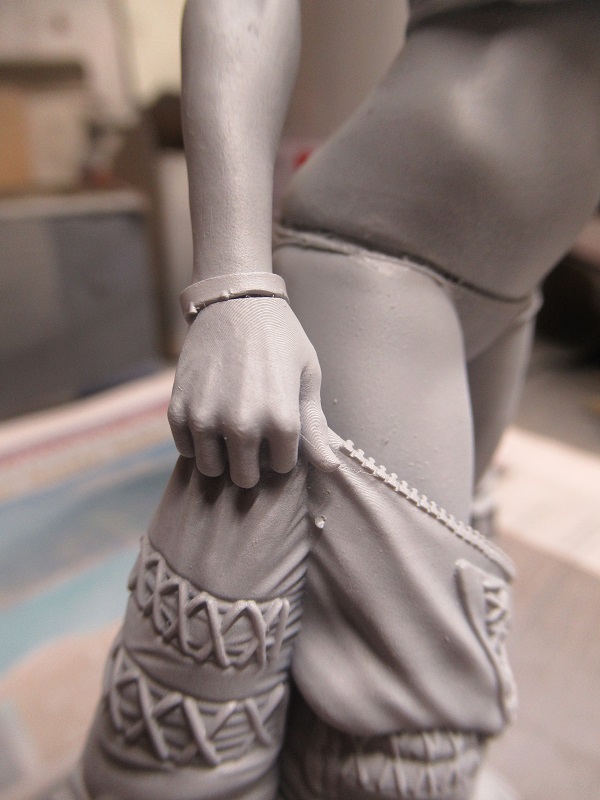 the close fit onto the suit fine, after a light sanding. 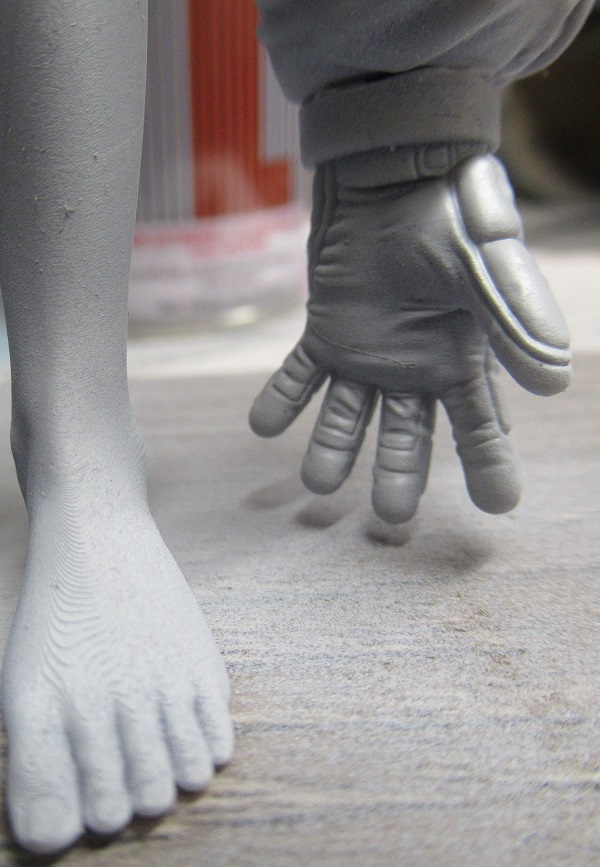 General views of the assembled figure in grey primer. 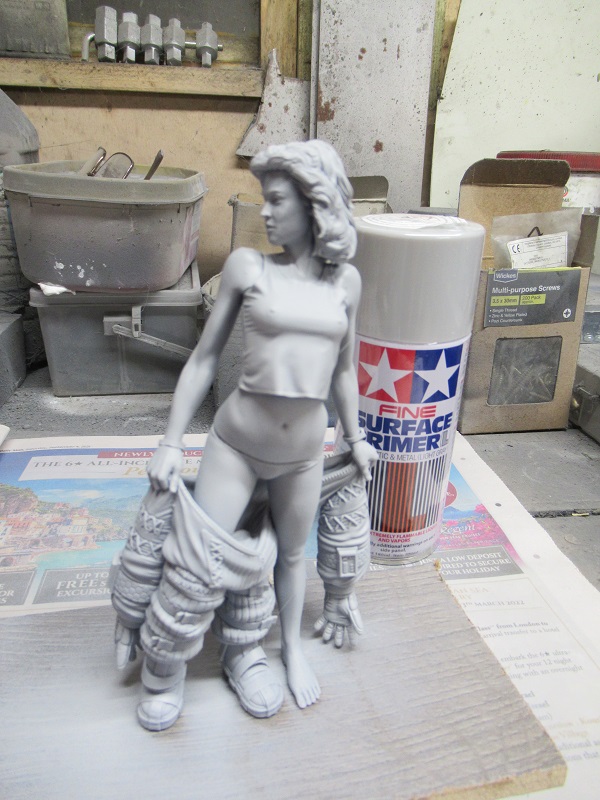 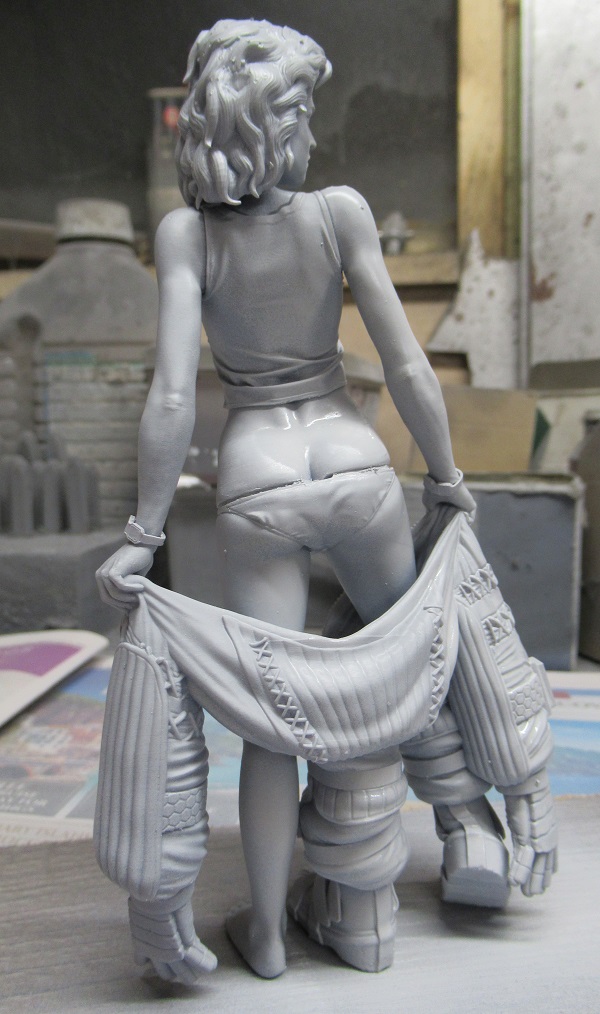 That sculpt has to be one of the best that i have seen in a long while. Outstanding.

No pressure on the painting mate !
If at first you don’t succeed, just delegate.

SPROCKET321 said:
a detailed viewing of this clip shows she only has a watch on her left wrist, her right being bare, so I'm going to have to cover that left wrist join very carefully.

I could be wrong, but I thought this was from the second movie, Aliens, when she is suiting up after leaving hypersleep.

EDIT: Don't worry, I am wrong. This is the thicker environmental suit she was wearing in Alien, not the jump suit she was putting on in Aliens
This space intentionally left blank

Book Reviewer
bloody hell, the likneness and the detailing on that is incredible.

how are you planning to approach painting the pressure suit may I ask please? it was absolutely pristine white in the film (presumably from never being used before) but I surmise that won't scale well if you just blasted it in pure white...
is madly in love with the Slug and doesnt care who knows it. from the moment she first got me in a headlock and took my lunch money off me, I knew she was the only girl for me.

Too slow, i'm on my second go now its been primed.