When I received this, I thought it was quite a slim book. The introduction and end chapter, where the son describes visiting the Italian villages where his father was helped as an escapee, really just pad it out a bit. The title is a bit misleading because he is captured on his very first raid. All that said it is a very interesting glimpse of the war in North Africa.

The story has been written by Major Hough’s son from some pencilled notes, personal recollections and stories. It is very obvious that the Major suffered from some pretty awful PTSD from his combat experiences, exacerbated by being a POW and then from long periods of time thumb twiddling whilst an escapee waiting for the allies to recapture the part of Italy where he was holed up. 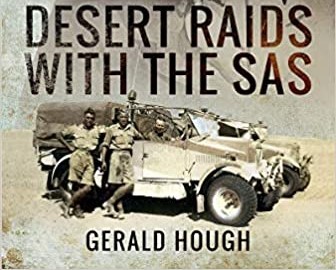 ​
Major Hough tells us of his experiences fighting against the Germans in North Africa. The loss of his men greatly affected him and there were some very heavy casualties, particularly from the Luftwaffe. He learnt to overcome his fear and encourage his men. He started taking the fight to the enemy by travelling behind enemy lines as a sort of precursor to the SAS which formed later. It was that experience that brought him to the attention of the authorities as a candidate for SAS selection. Then it seemed to me to be just as challenging as nowadays.

I’ve read about the heat, the flies, the lack of food (pouring bully beef out of tins) and water. He mentions all this but its mainly in an offhand, ‘this is how it was’ sort of way. The fighting with the Germans and Italians is also quite vividly described. Then he moves over to the first of the SAS units and after selection has 2 months of training, building on what he had already been doing. For the harassment mission he’s sent on quite a large force are sent behind the lines. A 2000-mile drive through very difficult desert, with losses on the way. Eventually arriving at their harbouring area which had very little cover and they could see that they were going to be very exposed for the work they were going to be doing. Which they were and after one sortie they were surrounded by and captured by Italians.

The major was taken to Italy by submarine with some other British officers and taken to one of their POW camps. On hearing the war news and the Italians capitulating he decided that rather than risk attempting to escape and get through the front lines he’d hide and wait. 4 of them hid in a water tower until Italians left camp, then walked out to find some Italian resistance people. Him and another officer were taken to friendly Italians in the mountains and looked after until the Germans came in force and many of the Italian families left their villages to live in caves high in the mountains. Food was scarce and the weather became very bad. Major Hough suffered some severe deprivations that took many months to recover from. Eventually he decided to walk through the mountains and get through to the British front lines, which he did with some very good luck. The story goes on to recount some of his recovery and return to the UK.

Book Reviewer
It sounds very much as if it could be a 'companion book' to Popski's Private Army.
Socialism is a philosophy of failure, the creed of ignorance, and the gospel of envy, its inherent virtue is the equal sharing of misery.
Is druga é bugsy a dhéanann mí-úsáid ar colúir

What was the unit he was in that´s described as, ´A sort of precursor to the SAS´ ?

Was it the LRDG?
NULL

Book Reviewer
LRDG carried out their own operations, but were also a 'taxi service' for the other groups operating independently behind enemy lines. Hough was probably part of LRP (which was later renamed LRDG) Most of the patrols were tasked to carry out reconnaissance and survelllance, of course they clashed with enemy patrols when unavoidable or had their LUP's given away by tribesmen, the number of deliberate actions was very small given the number of patrols and the length of time they operated for. The most well known one is probably Barce (and it's airfield, the real target. The attack on the town was diversionary in the main).
Socialism is a philosophy of failure, the creed of ignorance, and the gospel of envy, its inherent virtue is the equal sharing of misery.
Is druga é bugsy a dhéanann mí-úsáid ar colúir

This is what various book sellers have as the overview:

"Tony Hough’s war started with ski training in the Alps in early 1940 preparing for winter warfare in Finland. Nothing came of that. Later that year, now an officer with 9th Battalion The Rifle Brigade, he sailed for North Africa. In March 1941, his under-gunned Battalion suffered a catastrophic baptism of fire in Libya from 15,000 troops and 500 tanks of Rommel’s Afrika Korps."

"For the next 18 months Hough and his Battalion experienced brutal conflict against a formidable enemy. Selected for David Stirling’s elite 1 Special Air Service (SAS), he was captured in December 1942 while raiding behind enemy lines."

"Sent to an Italian POW camp he suffered the deprivations of captivity. After the September 1943 Italian armistice, he escaped and, after an arduous three month ordeal, he reached Allied lines thanks to the help of brave locals. He went on to fight in North West Europe before becoming a mayor in occupied Germany."

Re ski training in early 1940, the various special forces as they became known had not been officially formed by then. France was invaded by Germany in May 1940. Could this skiing have been preparation for Plan R 4 which was thwarted by refusal by Norway and Sweden to allow allies on to their soil. A Finn I talked with some years ago was very angry about that. From wiki so usual caveats apply:

Perhaps that French Alpine brigade may have been involved in the ski training he received. With R4 and Wilfred canned, the Norwegian campaign followed. The overview doesn't mention that but jumps to North Africa later in 1940.
Last edited: 20 Jun 2021

He himself added this about his father in the forum in 2017:

"He met David Stirling in Chamonix in early 1940 when Five Scots Left Wing was formed to prepare for snow warfare in Norway and Finland. By the time they had completed two months of high altitude alcohol consumption in the company of people such as Jellicoe and Fraser Norway had fallen and Finland had an armistice with Russia so it was disbanded. He returned to 9th Battalion Rifle Brigade before deploying to North Africa."

I found this from the Axis History forum:

Earl Jellicoe - suddenly found that there was a chance of joining the 5th Scots Guards, which was a skiing battalion, aiming eventually at Finland

A 5th Battalion had a brief existence as a Ski battalion, recruited from experienced volunteers, civilian and military, called for in telegrams despatched by the War Office all over the world. It was nicknamed “The Snowballers.” The life of this most odd unit spanned three months - January to March 1940 when it was disbanded. It had been intended for assisting the Finns but before it could be put to any use Finland had concluded an armistice with the USSR. The battalion did, however, get as far as Chamonix in the French Alps for training with a battalion of Chasseurs Alpins. This episode is most amusingly described.

Link to top of page. Well worth it for photos and dits:
British Troops In Finland 1940 - Page 3 - Axis History Forum

1st SAS was formed in September 1942 from the survivors of L detachment, after the ill fated Op Bigamy (unofficially aka Op Snowdrop in literature due to security reasons). This tallies with the claim that Anthony Hough joined 1st SAS and was captured soon after (December 1942) during a raid behind enemy lines. David Stirling was captured in January 1943 after which Paddy Mayne took command, reforming 1st SAS as the Special Raiding Squadron that April.

Nuremberg: A personal record of the trial of major Nazi War Criminals

Special Forces Operator: Serving with the SAS and MRF