Kit Reviewer
Let’s talk Danners. Unless you were living under the sea in the 90s and early 00s you’ll know that Danner were once the daddy for the discerning squaddy about town who wanted something a bit better than the standard issue high legs. Even James Bond wears Danners. The brand is legendary.

However as a better class of boots became available on general issue for free, Danner sort of disappeared into obscurity, at least where UK military boots were concerned. This was not a case of the new boots being better, far from it, the MOD simply favoured EU manufacturers over US ones. Since we could get really good European boots for free through the stores system, no one went out of their way to buy their own boots anymore.

Danner remained a market leader in the states and the rest of the World, not just in the military market, but also in the hunting, fishing and outdoors world. The good news is they’re coming back to the UK in a big way and are now available in various hunting / fishing outlets.

And luckily for me, they’ve sent me a couple of pairs from this category to review.

So first up are the Danner Powderhorns. These are mid range Gore Tex boots that have been designed specifically for hunting / shooting. When I say mid range, it’s worth pointing out that like most manufacturers these days, Danner have factories both on home turf (in the US) and in the Far East. They do a range of very high end boots that are handmade in the states and slightly cheaper ones from the Far East.

These were made in Vietnam. Having said that, you’d never be able to tell the difference. The same rigorous quality control goes into the boots regardless. Anyone who has read the thread about my trip to the Gore Tex factory in Germany (https://www.arrse.co.uk/community/threads/lenders-on-your-pro-boots-mate-a-visit-to-gore.220437/) will know how much testing goes into all Gore Tex boots, regardless of make, model or what factory they came from. Point of note, Danner were actually the first company in the World to use Gore Tex in their boots (although I’m sure AKU also claimed this when I visited their factory in May?)

Initial impressions on getting them out of the box are good. Very rugged and traditional to look at, massive stitched on sole with serious tread, beautiful full grain leather, but surprisingly lightweight for such big chunky looking boots. There is a tasseled piece of leather beneath the laces that adds a bit of protection and gives them a real traditional, lumberjack look. You can remove this, but I kind of like it. They are very American and wearing them makes me want to go and drive a giant V8 pick up.

With a 10” ankle, these are high. But that’s the point. You can get away with these in place of wellies in even the worst British weather. And that super chunky sole keeps you steady on the slippery stuff better than any wellies could.

Available with 3 different grades of insulation, there are Powderhorns to suit all weather conditions. This particular pair are the least insulated ones and probably the ones I would’ve chosen had I been buying them. Unless I was planning on using these in the snow a lot, I think these are perfect for most UK weather conditions. Just wear thicker socks if it’s cold. You’d maybe try the heavier ones if you were stalking deer in the Scottish Highlands over winter but for my intended purpose they’re perfect.

So what are they like to wear and are they suitable for their intended purpose as a shooting / hunting boot? Obviously these are designed with American shooters in mind, so they’re at home walking long distances (great for deer stalking in this respect). They hold up just as well for our style of driven shooting. In fact I’ve been pretty much living in these for the past fortnight. They’ve been on two driven pheasant shoots and one day of beating where I traipsed around 10 miles in them. Likewise I’ve just been using them as day to day boots while checking the pheasant pens and doing the rounds on the farm.

As mentioned before these are surprisingly light given their chunky appearance. There is a well padded insole which was a joy to stand in compared to the rock hard insoles on some of the military boots I’m used to. When you’re standing still on a peg, there isn’t much I’d rather be in. Even my usual shooting boots (sheepskin lined Laksen Dunbars with sorbothane insoles) are not as comfy when you’re just standing still waiting for the birds to come over.

Driving a 4x4 is just about manageable despite the massive sole. Certainly easier than wellies or dedicated mountain boots like Lowa Mountains. There is more than enough flex to maintain a bit of dexterity.

Looks wise, they’re more than smart enough to wear with tweeds if you need to look the part on the grouse moor. Being full grain leather throughout (no modern meshes or suede like material) they polish up beautifully with normal traditional polish. You don’t need any weird potions or lotions to keep these in tip top condition, which is all too often the case these days.

As I’ve grown to expect from all Gore Tex boots, they’re obviously waterproof and very breathable. Even after the relative warmth of the past few weeks, I haven’t taken these off after a day’s walking and found my feet to be a minging sweaty mess. I’ve said it before but I’d never buy boots that aren’t Gore Tex again. Not just for the material properties, but also for the quality control and manufacturing standards that Gore insist upon.

I’m really struggling to find something bad about these. At 200ish quid (a little more if you go for the more insulated ones) I think these are actually pretty good value. Once you add postage from the US and some tax they might come in a bit more, but these are a real quality item and the price is still comparable with equivalent high end hunting boots. You get a lot for your money here, quite literally when you consider the size of the boots and how much material must go into them compared to lower ankle boots. Let’s also not forget that you’re getting the Danner name here. As mentioned above James Bond himself wears Danners, anyone who knows anything about boots will know these are a quality item.

A point of note, I found these to be a half size too small compared to other boots and had to send the first pair back. I’m a 10 for AKUs, Lowas, HAIX, Scarpas, but needed a 10.5 for these. Just the way things are, no two boot manufacturers seem to have identical sizing and some even have variation across their own ranges.

I suppose if I’ve got to be really picky and find fault, I’d maybe add a little protection on the toe area to stop the leather getting trashed when walking through bushes and moorland. But then again this would ruin the clean lines of the boots and the traditional looks. On second thought, nah.....they’re great as is.

Many thanks to Danner for the opportunity to review these.

Available now direct through the Danner website and at the following UK stockists........... 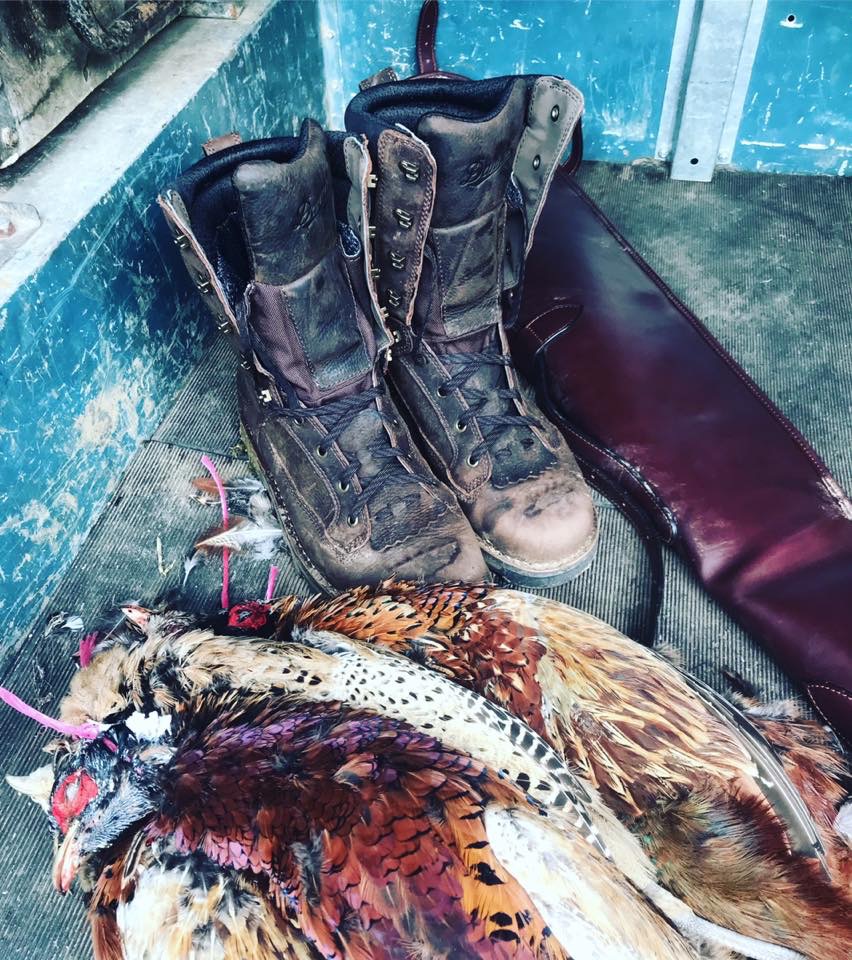 Looks like Danner recommend not polishing them
Never underestimate the power of stupid people in large groups.

That was after a full day of beating, straight out the box, never polished.
One cannot begin to fathom the immensity of the **** I do not give.

Ravers said:
That was after a full day of beating, straight out the box, never polished.
Click to expand...

Green and purple? Are you some sort of hippy?
NULL

Helm said:
Green and purple? Are you some sort of hippy?
Click to expand...

Eh? They’re very much brown.
One cannot begin to fathom the immensity of the **** I do not give.
A

polished boots are a fire hazard - as any good matelot will tell you..........
All complaints to be sent to /dev/null

Moderator
I think I need to test a set over a season of keepering, can you jack me up a pair please?
So long and thanks for all the laughs
https://280british.blogspot.com/

The Death Railway The personal account of Lieutenant Colonel Kappe on the Thai - Burma Railroad.
2