This book, like the recently reviewed one about football during the Great War, describes what happened to the sport, clubs, leagues and fixtures, whilst the majority of the male population was away fighting. It’s an interesting dilemma – ‘should we continue as normal, as those working in reserved occupations need distraction that keeps them fit, or should we close everything down until the boys come home?’. 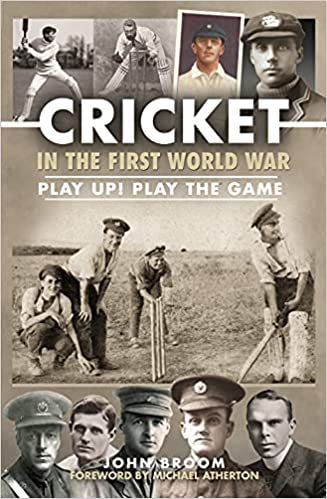 Of course everyone and his dog, including the press, club members, committees, MCC and the general public had their views, and this book describes the rather messy compromises which ensued. There’s a chapter for each year of the war, starting with 1914 and ending with 1919.

Some clubs gave over their buildings and grounds for Army training, for recuperation hospitals or for allotments. Others used the opportunity to get their finances into order, revamp their buildings and improve their pitches, whilst everyone arranged what fixtures they could, with much-reduced county teams playing schools and universities, recuperating wounded, regimental teams and even (sharp intake of breath!) Ladies! to keep the game alive. Interestingly to this child of the 1950s, Gentlemen bowled underarm and batted wrong-handedly when playing Ladies.

What I liked about this book was the descriptions of what happened to individual players, where they served, and how service affected their playing careers, Including the lad who lost an arm, yet still managed a first class cricket career after the War. The other side of that coin was the huge amount of detail, which tended to bog the book down. The author has done a huge amount of research, and the book was very interesting to read, but by the end, I am sorry to say I was a bit fatigued from the huge amount of information. This despite the leaven of a section on the Church v Australians fixture, and of a described match in Palestine, which featured the then Lt Col Archibald Wavell, played on a matting wicket with an outfield of thorns.

Amazon.co.uk : cricket in the first world war
Click to expand...

There was a TV movie in the 80's, 1914 All Out about a village cricket team from the Yorkshire dales. I seem to recall it was very good.