According to the Private Eye, Crapita have fooked up its worst performing contract big time, that of Recruiting. Apparently they couldn’t get enough piss heads to form a bender or enough perverts to form the smallest perverts fook up of all time. They are so bad they have had another £6.5m thrown that them in an effort to cover up that Service-men are the best recruiters, as they actually give a fook about the type of recruit signs up and actually makes sure that the information they are given (back-then) was relevant to what they actually wanted to do. Rather than Crapitas policy of smashing square pegs into round holes. Nick Soames ex armed forces minister thinks the hole thing is a pigs ear, and is very suspicious of the bollocks that Mark Lancaster is spouting even though he apparently is the current AFM.
I remember back then had it not been for my recruiting Sgt, I would never have got into the Army and the Paras in particular, had he not covered up my misdoings I would never have got the chance to later in life of throwing a bayonet down an Argies throat.
So how do those going through the system feel about the service that Crapita are providing for there £500m contract? Moreover was anybody else helped by the recruiting staff so that they to could look cool in their No2’s?
I take pride in my spelling and grammar incompetence and innate ability to wind up fellow Aarsers with my command of the English language and incompatible spelling.

Ah, Capita. Ignorance is, well, something.

The recruiting for the Reserves is going great guns, if an outstation, say a Troop, shares that location with a larger unit, then they don't appear to the candidate or Candidate Support Manager (clueless civvy) as an option.

So you have 123 Mess Tin Repair Tp (quals required: pretty minimal) out recruiting hard only to have no one they've tried to recruit assigned to them. Why's that? Turns out that because their location is an MI HQ (quals required: A Bit More) they don't make the cut and get farmed out elsewhere.

The system is also geographically confused as a RSUSO (STAB recruiter) recently pointed out, turns out that the Royal Monmouthshire Royal Engineers (Militia) RHQ is Monmouth Castle not Edinburgh Castle as it appears on the system. The system has only been live since November... 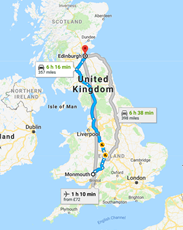 One can't help but notice that lately on Arrse there has been an unsettling shift towards threads of a military and/ militaria nature and other good, sensible and sober matters.

This has to stop as Arrse is no longer what it once was and is now in grave danger of being subsumed by M*msn*t.

I propose that Capita are give a lucrative multi year contract to monitor all subject matter posted with the sole aim of maintaining the sort of standards here that one may reasonably expect from Her majesty's Daily Telegraph.

It is the only way that will guarantee Arrse collapsing irreparably into the pool of drunken or mentally impaired drivel, filth and inter-user hostiliy and abuse that we love and cherish.
HappyNomad, AMV. Arrse Grand Master Vermin (Category A / Class 1)

I may be bending reality somewhat there.

Crapita messing up a contract is about as surprising as discovering that bears defecate in the woods
Join me at Torn-City - Massively multiplayer online text based RPG , meet interesting people and put them in hospital

mush_dad said:
If only there was an existing thread on this fascinating subject
Click to expand...

Capita are in dire straits, similar to Carillion. They have over extended themselves and aquired businesses outside their core portfolio. The Company I work for have a couple of contracts with Capita that are rapidly being moved away from them as their future is a tadge uncertain.
Fat Mouse Website: http://www.fastmousephoto.co.uk

Moderator
I have endured Crapita temp work with Network Rail. Instead of them getting the client to confirm requirements they just get wooly and try and bully you into buying unnecessary insurance amongst other rubbish such as the enhanced Scottish CRB check for work no where near Scotland. I have got fed up of telling crapita NO! and have them as spam in my email.
So long and thanks for all the laughs
https://280british.blogspot.com/
K

I did a PRINCE2 course with a bloke that worked for Capita. Once he established that I was in the Army he said it was interesting as he was going to project manage Capitas impending recruiting activities into service. Nice chap, a bit dim though. To be fair to Capita I’m pretty sure that we would have thrown the task over the fence to them without inserting any relevant control measures.

re-stilly said:
Capita are in dire straits, similar to Carillion. They have over extended themselves and aquired businesses outside their core portfolio. The Company I work for have a couple of contracts with Capita that are rapidly being moved away from them as their future is a tadge uncertain.
Click to expand...

Announced on 'Today' that Capita has made a loss of GBP 500 million and is asking shareholders to pony up 700 million in new funds.

Moderator
Good luck with that one, I must check where my pensions are invested!
So long and thanks for all the laughs
https://280british.blogspot.com/
You must log in or register to reply here.