Could this be Tony Blair's legacy?

Banner headline on front page of London Evening Standard on Tuesday 31 May 2011:

'CITY OF CHILDREN WHO CAN'T READ'

Whatever one's political beliefs it cannot be denied that Blair was concerned, consumed even, with the definition of his eventual 'legacy'.

At the risk of declaring my political 'colours', I offer the following as suggested legacies:

Illegal invasion of a sovereign state.
Imposition of a 'presidential style' of government; by-passing Cabinet and Parliament.
Inopportune posing and posturing on the 'world's stage'.
Craven submission to all aspects of American policy.
Sleaze.
Complete adherence to each and every directive emanating from the European Union.
Failure to control and curb the excesses of his psychotic Chancellor.
Destruction of hundreds of years' worth of the nation's history and precedents.
Inappropriate behaviour towards his Sovereign.
'Pop-star' and 'show-business' attributes displayed to excess.

The above are some of my ideas for Blair's legacy.

The newspaper outlines in detail the disgraceful failure of our education system. It concerns itself only with London, but it may reasonably be assumed that the sorry state is true for the entire nation.

I submit as Blair's legacy is the total failure of our education system. Family disinterest must bare some blame, but the greatest blame must be laid at the politically driven dogma of the educational 'establishment', whose motto may well be: Level. Level Down'.

A city of children who cannot read | News

If you like to add one, which also to an extent covers also some of the reasons for the reading statistics:

Secretly encouraging free access to immigrants to move to the UK.

A change to the ethos of the role of a Prime Minister; to that using it totally for self-ambition, career progression and future income; and uniquely I believe, compared with any previous PM, with total lack of consideration for the overall good of the nation.
Our society needs to be tolerant. But in acceptance of that, how far should we accept views and actions which are themselves intolerant or which incite intolerance?"

Little as I care for the fellow, your list of indictments isn't so much a historical legacy as a charge-sheet. He presided over a 'more of the same' government - more debt, continued submission to Brussels, usual submission to the US, further decline in educational standards, more erosion of probity in public life. It was Heath who took us into Europe, Thatcher who crushed the unions, Wilson who kept us out of Vietnam (which isn't much of a legacy, just an example of how it can be done), Churchill who fought the Nazis.

By trying to suck up to everyone and governing through opinion poll and focus group, his historical legacy, is nothing. There were no great innovations, no national changes of course, and Blair was in essence an ingratiating and inept middle-manager elevated above his level of competence.

tom_dkg said:
...with total lack of consideration for the overall good of the nation.
Click to expand...

I feel that this attitude is endemic within politics these days. They seem to be very quick to forget that they are public servants and aren't in power to serve themselves or their party but are beholden to everyone from the richest to the poorest.

Labour's financial scorched earth policy demonstrates this superbly and is why they should never hold office again.

Well this, for me is an unfortunate legacy that we are all now stuck with & it is going to take a lot of unravelling now the deeds have ben done. If there ever was a case for applying the rule of, if it ain`t broke, don`t fix it.

1. Yes the upper house needed to move away from the hereditary principle, but don`t bodge it even more & make it even worse before you`ve even figured out what the final solution is. The life peerage has become a lucky bag joke operating on FIFA principles. At least his lordship was born in to the position completely independant from the influence of government instead of these political noddy appointees.

2. What was wrong with law lords, but no, we`ve got to have a Supreme Court like the USA.

3. Immigration officers. I quite liked the informality of returning to the UK to be met by a civil servant in tweed sports jacket or skirt. But no, it has to be a uniformed force ffs.

3. Saddling all of us up with the cost of Welsh windbag assemblies & Scottish parliament talking shops. Re-opening up this pandoras box of matters long since settled on the battlefields of Britain & the negotiating table of our forefathers. Leaving aside the cost of all this over representation now we`re broke, after more than a decade, realistically, is Scotland or Wales (ignoring the giveaway perks that cannot possibly last) going to be any better off. I think not & now we`ve manouvered ourselves in to an SNP administration in Scotland with an overall majority.

Not forgetting arguably the defining achievement of Zanu liebore. The cult of political correctness which still holds sway in much of the public sector, backed up by the labelling of anyone not onside with it as racist/sexist/homophobic/guilty of "hate crime" etc and therefore stifling any kind of rational debate which opposes this narrow minded, pernicious neo marxist dogma.
Qui non intrat per ostium fur est et latro.

Only a generation ago, Britain was rightly famed throughout the world for the high standards of integrity, decency and probity in our public life. Our civil servants did not take bribes - in sharp contrast to the deplorable conduct of officials across most of Europe, Africa and beyond. And our politicians were keenly conscious of the distinction between public service and private greed. They did not go into government to make a fortune.
But over the past 13 years, British public life has undergone a terrible deterioration. As the Commons expenses scandal so graphically demonstrates, MPs today think nothing of extorting money from the taxpayer.
Meanwhile, former ministers shamelessly profit from office by making ruthless use of their contacts. And the office of Prime Minister, instead of being the ultimate ambition for every aspiring MP, is now seen as a stepping stone for joining the super-rich.
The great historian A.J.P. Taylor once remarked that David Lloyd George, who led Britain during World War I, was the first Prime Minister since the notoriously corrupt Sir Robert Walpole in the 18th century to make money as a direct consequence of holding high office. But in the league of shame, Tony Blair is arguably the worst of them all.
We now know that the wretched Blair has multiplied his personal fortune many times over by trading off the connections he made while in Downing Street. Shockingly, he fought a long battle to conceal the source of his new-found wealth, until it finally became public that one of his largest clients was a South Korean oil company, the UI Energy Corporation, with extensive interests in Iraq.
Since he has also made £1million from advising the Kuwaiti royal family, it can be fairly claimed that Blair has profiteered as a result of the Iraq War in which so many hundreds of thousands of people died - including, of course, many British servicemen. In all, Blair is thought to have made some £30million since leaving Downing Street in July 2007.

not bad £30M in 4 years, and of course one assumes that he makes the most of our tax laws to pay the least amount he can possibly get away with. He and Broon between them managed to bankrupt the country but he (and that shrew of a wife of his) have found it a nice little earner!!
It was the Navy that invented sex - but the Army that introduced it to women.

"Apprehension" is "shit scared" with a university education.

Book Reviewer
Unfortunately the sad state of this country is the most direct, and obvious, legacy of Mr Blair.
No sooner did we form into teams than we were re-organised.
I was to learn later in life that we tend to meet every situation by re-organising and what a wonderful method it is for giving the illusion of progress whilst only producing confusion, inefficiency & demoralisation.
PETRONIUS AD 66

This sums up Tony and Gordon....

I don't understand the purpose of this thread. Is it to simply slag off Tony Blair, or slag off the UK?

CJM said:
I don't understand the purpose of this thread. Is it to simply slag off Tony Blair, or slag off the UK?
Click to expand...


If you've anything positive to say about Blair, please feel free to go ahead.
C

Pigshyt_Freeman said:
If you've anything positive to say about Blair, please feel free to go ahead.
Click to expand...

At least he didn't look like he had a baboon's arrse sewn onto his face like Brown?

I remember Blair saying' Education x 3...' So his legacy cannot be illiterate school children.
his legacy will be the break up of the Union buy trying to buy votes in Wales and Scotland by giving them governments. There is only one diretion now.
There is no armour against Fate.


Not really what you'd call a historical legacy, though, is it?
B

bobthedog said:
No his wife was wearing it for him......
Click to expand... 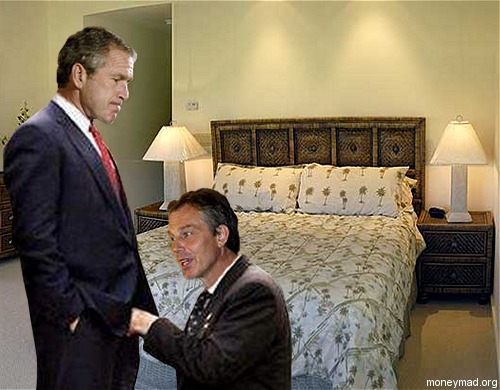 "Tiresome investigators have undermined this excellent tale, but it certainly should find a place in any history worthy of the name. If Pathans themselves are in doubt, or hanker after more traditional forebears, let them remember that Herodotus was the first to call the people around Paktuike the bravest of all the people in those parts."

Book Reviewer
What about this one:

Oh the joy of the welfare state.

Yes, but even so, all he's done is carry on the same shit policies as the people before him that led to this state of affairs. There's nothing about it that's distinctively his doing.

He wasn't capable even of being shit in an original way. The man is, was and ever shall be, a little chunk of ****-all.