A review by @Kandahar80 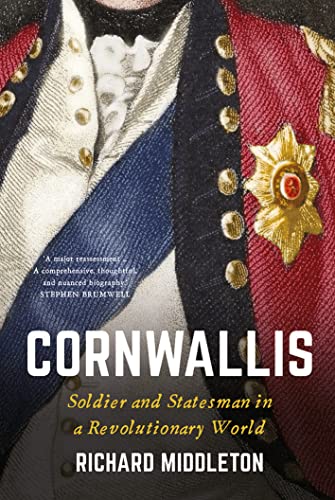 Charles Lord Cornwallis is known as the man who ‘lost’ the American colonies at Yorktown. This new biography shows a man of various achievements in many roles, not just America. As the last biography was forty years ago, this one is well overdue. Middleton, formerly Reader in History at Belfast University, is known best for The Bells of Victory describing Britain’s victories in the Seven Years War. That this volume is published by Yale University Press speaks for his academic credentials. His work is well researched and balanced in its judgements.

Cornwallis was a keen soldier early on, leaving Cambridge for a commission in the Grenadier Guards. His conduct of war against the Americans was mixed, being outfoxed by Washington after the Battle of Trenton, but scoring a decisive victory against Horatio Gates at Camden. Although American historians are more censorious, Middleton shows that Henry Clinton’s orders led Cornwallis to take his army to Yorktown. The responsibility for his being surrounded and captured by superior Franco-American forces was primarily the Royal Navy’s. On his return to England he was greeted by Londoners as a hero

. As Governor-General and Commander-in-Chief in India, he waged war primarily on corruption and on East India Company officials lining their pockets. He endeavoured to improve the quality of the Company’s European regiments who could not match the King’s troops; and to reform the tax system and the law courts. For the latter he accepted the recommendation of Sir William Jones, a Supreme Court justice and founder of the Asiatic Society, that Hindu and Islamic laws be translated and published. Cornwallis also endeavoured to keep peace, but Tipu Sultan’s attack on a British ally the Nawab of Travancore drew him into the Mysore War. This he concluded successfully by taking command himself. Tipu did, however, recover and it was left to Viscount Wellesley and his brother the future Duke of Wellington to extinguish Tipu’s power.

Cornwallis’s exclusion of Indians from positions of responsibility reflected his belief in their untrustworthiness and his lack of vision for India’s people except as subjects of the British crown. In Ireland in 1798, he showed greater breadth of understanding, advocating rights for Catholics and taking measures to stop indiscriminate floggings and hangings of Irish rebels following the British victory at Vinegar Hill. His moderation put him at odds with the Anglo-Irish elite.

Other aspects of his career such as negotiations with the French and political service are given proper weight. Compared to his public life, his personal one is in the background. His marriage to Jemima Jones from a modest family was a love match. Her death in her early thirties left her widowed husband grief-stricken. His return to the American War was an attempt to find solace in action.

Middleton’s one weakness is his failure to bring alive the action of war and combat. Otherwise this is a well-written biography giving insight into the career of a distinguished soldier and statesman.