This book is a series of memories and descriptions from those who served in the UDR in East Tyrone during the twenty-five years of the Troubles in Northern Ireland. Anthony Leask, the author, was their Commanding Officer before becoming Commander Land Forces Northern Ireland.

There are photographs, illustrations, maps and vivid descriptions of living and working as part-time and full-time members of the UDR. I was very moved by how hard it was to be a part-time soldier working as a postman, milkman, mechanic, joiner, etc., knowing that amongst your community were people who wanted to kill you and your family. Having to look under your car all the time was the least of it; worrying about whether your neighbours were your friends, and if they were, whether they would be harmed because of the job you did, worrying about your family, and being vulnerable to abduction, maiming or murder because you had a particular job must bring untold stress. No wonder their Veterans’ Association works so hard nowadays.

I was also shocked to see how little practical or financial support was available to those who were wounded, and sincerely hope that things are better for them now. They will never truly be able to relax, particularly since the Good Friday Agreement released so many of the individuals at whose trials they had been witnesses without any protection from being identified.

It’s a thought-provoking book, and the descriptions of actions from the different perspectives of those involved provide a window into how difficult it is to provide watertight evidence to a trial at the time, let alone one forty years later. 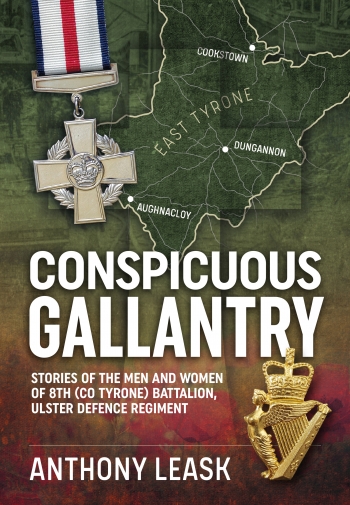 It’s a good book for people to understand how ‘up close and personal’ the troubles were for UDR soldiers and their families, and to appreciate their sacrifice to uphold democracy and the rule of law. In my opinion it could have done with a better Editor, as there are a few inconsistencies and quite a bit of repetition, but I cannot award it less than five mushroom heads, for the experiences related and the trauma it describes.

Enjoy the freedoms we have in our Country, but never forget the price that has been paid for them. Proceeds from the sale of the book will be given for the maintenance of the memorial to the 44 men of the 8th (Co Tyrone Battalion) Ulster Defence Regiment CGC who gave their lives during the campaign against terrorism 1970-1996.

Conspicuous Gallantry - just one of the military history books available from Helion & Company.

Fire of the Dark Triad by Asya Semenovich

The Padre was a Hooker by Stephen A Blakey