Book Reviewer
I like a few others on here, like to have a wander around small churchyards, and examine the wartime gravestones, often the most unusual ones are in Churches where you would never expect them.
Today I was taking my Grandson Cycling, on the way out I pointed to a very small church, and said I had attended a friends funeral there some years ago, oddly later in our journey he asked about the church !!!
I explained that it was very old and contained some early wall paintings, perhaps if we had time we could stop off on the return journey
we changed our route to visit it, unfortunately the church is at present locked, but a wander around the churchyard revealed four CWGC graves
so we stopped for a look and to take a picture of them
the church is well worth a visit when open see link 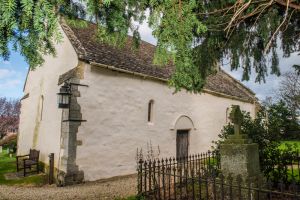 www.britainexpress.com
and is not far from Tewkesbury Abbey, parts of the village and the adjoining villages are medieval, and the road heads towards Winchcombe itself dating far back in time ( Hailes Abbey)
nearby used to be the coal research establishment, now a housing estate, however before that it was a shadow factory for the Gloster aircraft company
further along the road is the site of the old Stoke Orchard airfield, later used by Smiths industries for aircraft testing ,but originally a training airfield for No 10 Elementary flying school, using Tiger Moths, then becoming No 3 Glider training school, the Horsa Gliders were built locally, by many furniture companies, so perhaps they were assembled here, now it is home to a gun club and a recycling depot, although alongside the railway line, piquet posts and bunkers are still evident, and a property on the other side of the line was once the home of Amy Johnson who flew from the Airfield at Staverton

however, after taking some picture of the grave stones I did a little research here goes
perhaps other member can fill in a bit more information 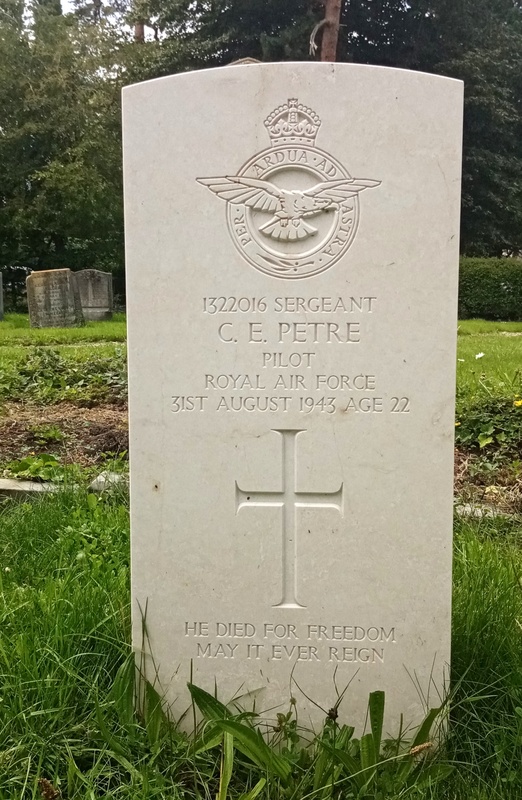 Charles Eric Petre 1322016 R.A.F. (V.R.) Son of Charles William and Lillian Beatrice Petre of Dagenham Essex
perhaps a victim of a training accident , as this would have been around the time of the Glider training school 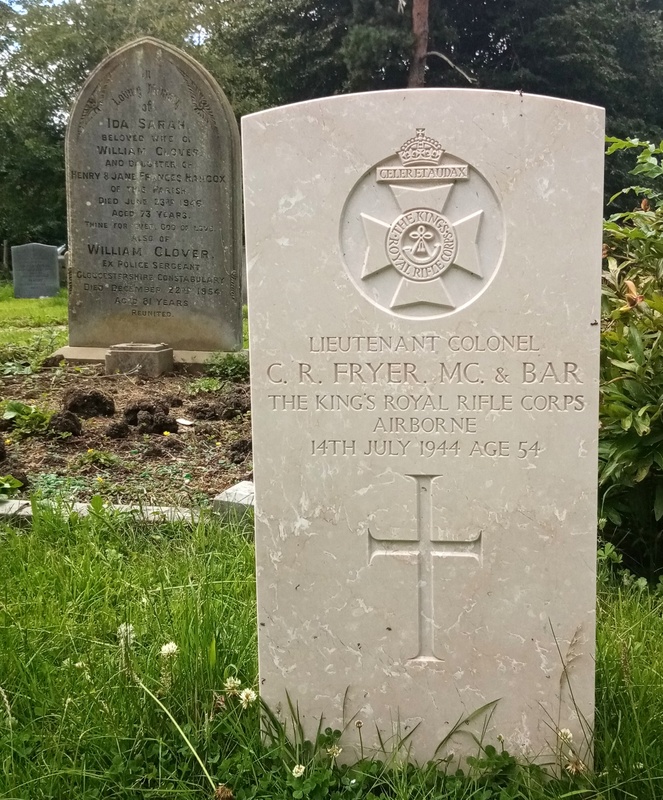 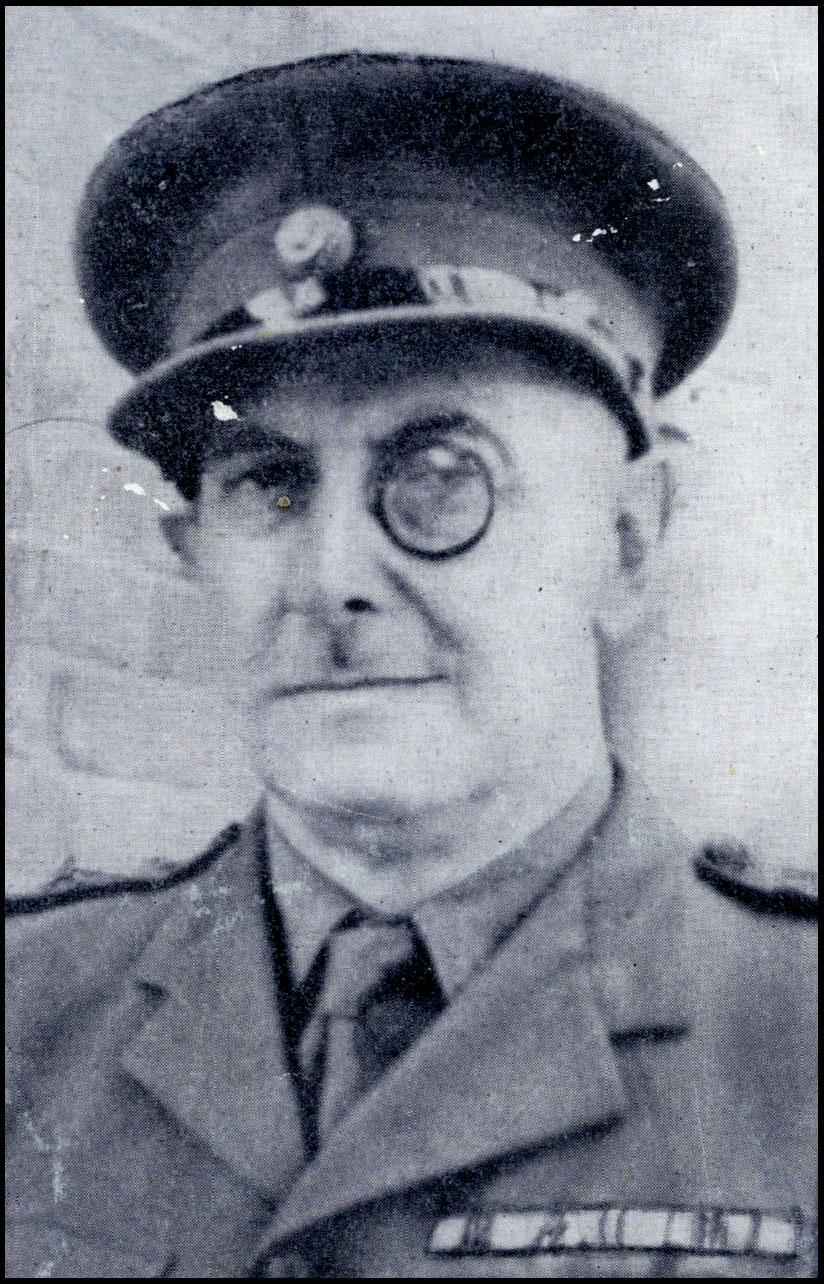 Now this Gentleman was quite a surprise, his age first of all, however he was also connected to the Glider Training School
Lt-Col Charles Ronald Fryer 48339 M.C. and Bar
The Kings own Royal Rifle Corps
CDG 2 Army glider Pilot Sec Army Air Corp Killed 14th July 1944 54 years of age
The Son of Charles. S. Fryer. and Mary Fryer
I wondered about the M.C. and it seems he had a distinguished career in the Great war, and was either mad as a box of frogs or brave as a lion
a little more about him here
M.C. London Gazette 16 September 1918:

‘For conspicuous gallantry and devotion to duty. This officer was in command of a raiding party that penetrated the enemy’s first line and support trench with great success, doing much damage, causing many casualties, and capturing four prisoners and a machine-gun. All our wounded were brought back, and Captain Fryer, who was carrying one of them, was the last to leave the enemy’s line. The complete success of this raid was largely due to the very careful manner in which he had previously trained his party and the fine courage and ability with which he led his men.’

Lieutenant-Colonel Fryer was born in 1888, the son of and Mrs. C. Fryer. On leaving Nottingham High School he went to South Africa, where he was farming when the 1914-18 War broke out. He was soon home, and enlisted in the Regiment and joined the 6th Battalion. He was soon granted a commission, and found himself in France with the 2nd Battalion in 1915. He was wounded in the Battle of Loos. Convalescing at home, he joined the Royal Flying Corps, but in course of training was crashed by another pilot and injured. He rejoined the 2nd Battalion in France and by 1918 was a highly efficient Company Commander. He carried out a very successful raid with his Company in front of Noeux les Mines and received the M.C. for his gallantry on that occasion. After this he became Adjutant of the Battalion, and in that capacity was with the Battalion in all the fighting which led to the Armistice. He particularly distinguished himself on 4th November 1918, when doing a personal reconnaissance for his commanding officer. He and his orderly, Rifleman Procter, a fine member of the Rhodesian platoon, completely eliminated an enemy post which tried to hold them up. For this and his other services he received a Bar to his M.C.

After the Armistice he volunteered for service in India, where he became Adjutant of an Indian battalion. He went to Mesopotamia, where he was on the H.Q. Staff during the Arab rebellion. He then volunteered as an instructor to the Persian army, and for his services there received a Persian decoration.

Many first-class temporary officers joined the Regiment 1914-18, but none had a greater love for the Regiment or absorbed its traditions better than Fryer. He made a great success as Adjutant of the 2nd Battalion and his Commanding Officer placed absolute confidence in him.

After the Armistice Captain Fryer returned to civil life and lived at East Fulham, where he became a Borough Councillor and Private Secretary to Sir K. Vaughan-Morgan, M.P., and took an active part in local affairs. Early in 1939 he became Adjutant of the 2nd Battalion, Queen Victoria's Rifles when that Battalion was raised, and when war started he became Adjutant to the Training Battalion. In January 1941 he was appointed Staff Captain at Southampton. The following June he was A.D.C. to Lieutenant-General Easrwood at Northern Command. After two other Staff appointments he joined the Paratroops in May 1942 and became an instructor in glider pilot training, and was promoted Lieutenant-Colonel. In 1943 he was Second in Command of the Parachute Battalion Depot for nine months, but in November that year he returned to command his former Glider Pilot Section. He then applied for a Pilot Flying Course to completely fit himself for his job. At the age of 56 this was a considerable achievement, and he was on the point of attaining his desire when a crash landing ended his life.’

An accompanying medal roll extract in respect of the recipient’s General Service Medal 1918-62, confirms his entitlement to the ‘Iraq’ clasp for services as a Captain in the 2nd Battalion, 119th Infantry, I.A., while his MIC reveals that the same award was returned to the issuing authority in May 1925; so, too that he was entitled to emblems in respect of a mention in despatches.

Sold with the recipient’s original Army Council condolence slip in the name of ‘Major C. R. Fryer’, complete with original addressed card forwarding. The former notes entitlement to two campaign awards, and given Fryer does not appear to have gone overseas, these would have been the Defence and War Medals - the addition of the above described 1939-45 Star therefore remains unverified.

Also sold with a file of research and a copy of The King’s Royal Rifle Corps Chronicle, 1944, in which appears the above cited obituary notice.

Papers in respect of the recipient’s military career are held in the Liddell Hart Centre for Military Archives at King’s College, London.

link to an article about his medals

Based in London's Mayfair, Noonans is a leading specialist auctioneer and valuer of banknotes, coins, tokens, medals and militaria, jewellery and watches 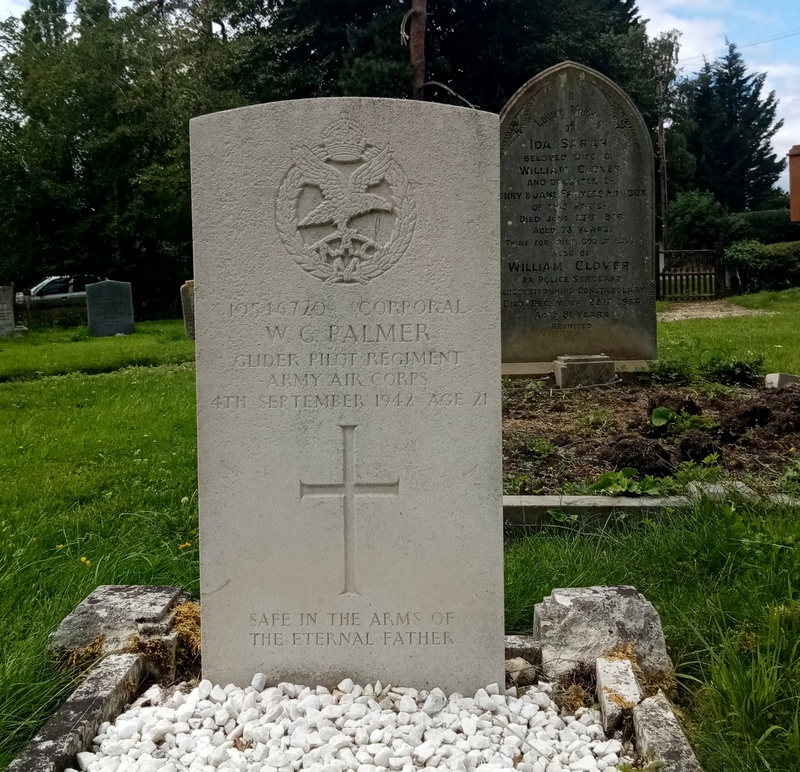 Corporal Wallace Charles Palmer 10546720
1st glider pilot Regiment, Army Air Corp , Son of Walter Charles and Emily Lily Palmer of South Chingford Essex
if you will note the much older grave surround, the cemetery records reveal that it was paid for by a relative, so when in disrepair the CWGC replaced the headstone 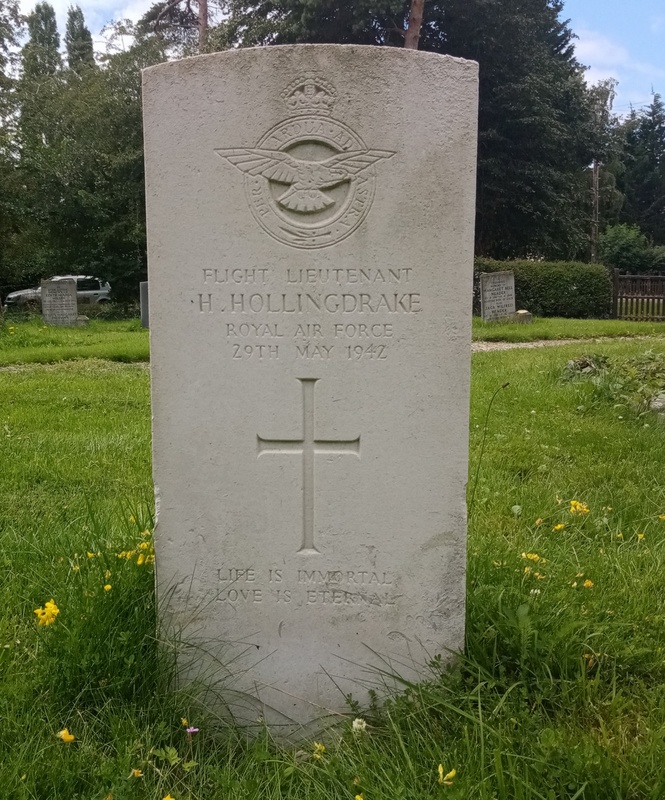 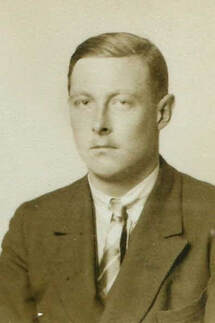 Book Reviewer
I have been looking at the records for aircraft crashes in the County, and found the following, next I hope to visit the local history centre and see if they are featured in the newspaper of the period

Wallace Charles Palmer
04.09.42 ? Hotspur II, 3 GTS, Crashed after being released from tow, Boddington
( boddington wasnt an RAF base but had no airfield it was simply a comms base and is about 1 mile from Stoke Orchard, )

Located this grave in Cathays Cemetery, Cardiff while researching some Battle of Britain history.
This was unrelated to that research but the age of the young lady got my attention.
She lost her life during the black out in a road traffic collision, very sad but not an uncommon event at the time. 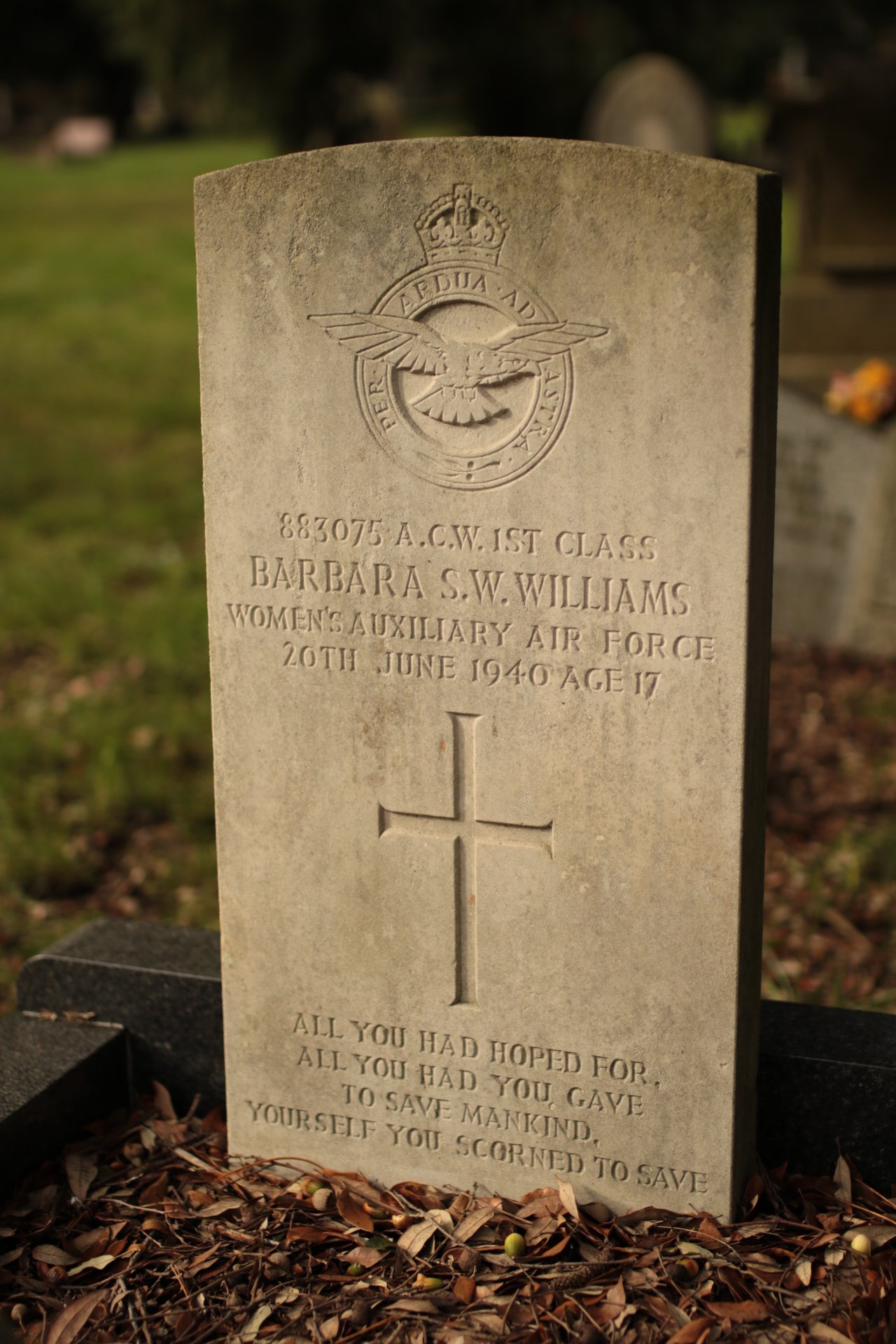 In the village of Brattleby, near RAF Scampton is this lone grave. The pilot of a Hampden aircraft badly shot up with flak over Antwerp in 1940. It was the aircraft where Sgt John Hannah, the Wireless Operator/Air Gunner earned his Victoria Cross by trying to beat out flames with his bare hands:

On the night of 15th September, 1940, Sergeant Hannah was the wireless operator/air gunner in an aircraft engaged in a successful attack on an enemy barge concentration at Antwerp. It was then subjected to intense anti-aircraft fire and received a direct hit from a projectile of an explosive and incendiary nature, which apparently burst inside the bomb compartment.

A fire started which quickly enveloped the wireless operators and rear gunners cockpits, and as both the port and starboard petrol tanks had been pierced, there was grave risk of the fire spreading. Sergeant Hannah forced his way through to obtain two extinguishers and discovered that the rear gunner had had to leave the aircraft. He could have acted likewise, through the bottom escape hatch or forward through the navigators hatch, but remained and fought the fire for ten minutes with the extinguishers, beating the flames with his log book when these were empty.

During this time thousands of rounds of ammunition exploded in all directions and he was almost blinded by the intense heat and fumes, but had the presence of mind to obtain relief by turning on his oxygen supply. Air admitted through the large holes caused by the projectile made the bomb compartment an inferno and all the aluminium sheet metal on the floor of this airman's cockpit was melted away, leaving only the cross bearers.

Working under these conditions, which caused burns to his face and eyes, Sergeant Hannah succeeded in extinguishing the fire. He then crawled forward, ascertained that the navigator had left the aircraft, and passed the latter's log and maps to the pilot. This airman displayed courage, coolness and devotion to duty of the highest order and by his action in remaining and successfully extinguishing the fire under conditions of the greatest danger and difficulty, enabled the pilot to bring the aircraft to its base.

Flying officer Connor was the pilot, and because there were no witnesses to his immense skill in getting the burning aircraft back to Scampton and landing it successfully was awarded the DFC. He was buried in the Churchyard in the Parish of Brattleby, and is the sole war grave in this cemetery. All others were buried in the churchyard of Scampton Village.

Brattleby being a small village with no more than 80 people resident decided that with the ongoing conflict their graveyard was too small to bury the casualties of the nearby RAF Station at RAF Scampton.

I should add that Flying Officer Connor survived the fire and landing at Scampton, and went along to Buckingham Palace for the award of the VC to Sgt Hannah, and his DFC from King George VI, however about 4 weeks later he was killed when on a bombing mission over the North Sea

The noble art of being a Military Scoundrel
7 8 9

The spy who died out in the cold