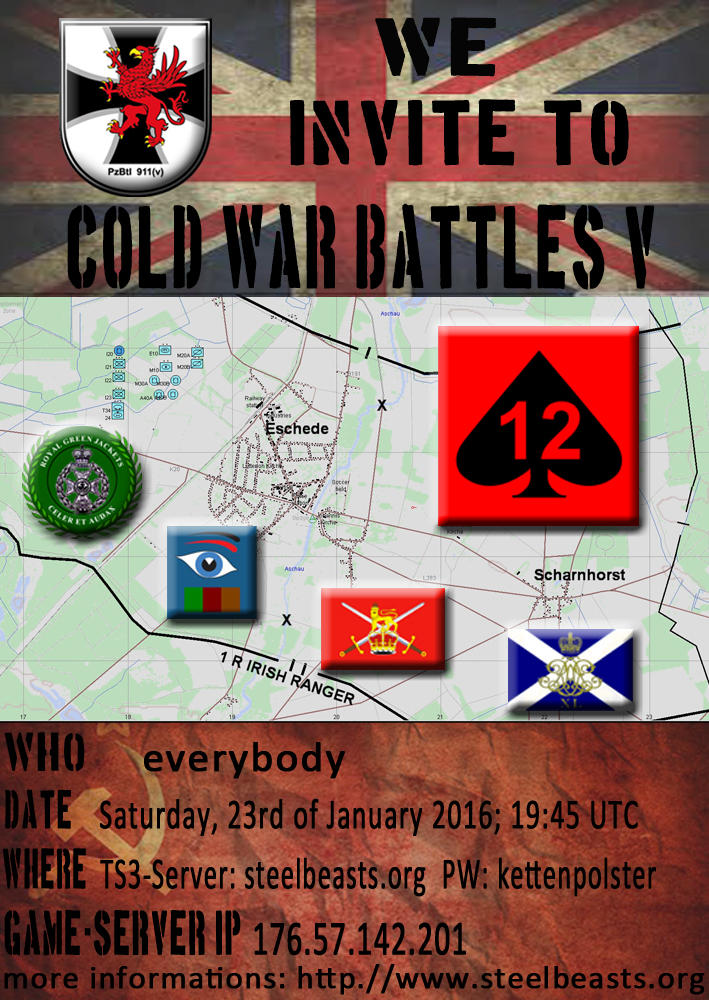 0)PRELUDE:
Visit youtube and search for a movie called "the demolition guard" and watch it to get a gist of how this scenario will play out and things to take into consideration and also to help set the mood right.

1)SITUATION:
a)Enemy:
3rd Shock Army have launched it attack west from the East German border. 245th Guards Motor Rifle Regiment (GMRR) has been identified together with 153th tank regiment (TR) to our EAST about 25km away.
The 47th Guards tank division have failed taking UELZEN, so they are most likely trying to find another way west. 245th GMRR are using BMP-2 and 153th TR has been seen with T-64B versions, so we sure are up for a fight.
Enemy Course of Action:
The Soviets are desperate for an intact bridge so expect anything in the book including civilian infiltrators to tactical air assault. But most likely COA is for the MRR to push WEST in best speed with a CRP up front and the remaining Regiment following soon after.

b)Own:
Our brigade (12th Armd Bde) are tasked with delaying Soviet forces advance until further orders.
Our Battalion (1st Royal Green Jackets [1 RGJ]) are delaying in the area of ESCHEDE - UNTERLÜSS - BAD BODENTEICH - WAHRENHOLZ with our south flank covered by 1 R IRISH RANGER.
A COY are to our east together with parts of C SQN 4 RTR delaying the enemy, C COY are to our NORTH defending the ASCHAU DAM's and further north.
We, the B COY of 1 RGJ are located WEST of ESCHEDE tasked with being demolition guard for the ESCHEDE bridge who is the only remaining standing bridge after the Royal Engineers have blown up all other bridges in the area to delay the Soviets.

d)Terrain & Weather:
i)Terrain is fairly flat with open farmlands patched with small forests and small villages (mainly SCHARNHORST and ENDEHOLZ) posing no threat to armoured manoeuvres.
Through the AO runs a river named ASCHAU that is between 10-30m wide running in NORTH-SOUTH direction splitting the town of ESCHEDE in one WESTERN and one EASTERN part, with the EASTERN part being the smaller one.
On the WESTERN side you find down-town, School, railway station and industrial areas. Also in NORTH-SOUTH/SOUTHWEST direction goes the one track railway between CELLE and UELZEN but it imposes no effects on us or our enemy's movement.
The road network is very good, main road is B191 who is going from NORTHEAST to SOUTHWEST through ESCHEDE and L283/K20 that runs in a WEST-EAST direction through ESCHEDE.

ii)Weather
Weather forecast is initially cloudy with a weak WEST-SOUTHWEST wind (1-3m/s) and 10-14C+ but later during the morning the clouds will disappear and temperatures will rise to 20-25C+.
Afternoon will see clouds and temperatures at 20C+ and light winds. Weather Forecast for tonight/early morning morning is rain and 15C+.

e)Civilians:
The war has taken many Germans with surprise and many are fleeing west to get away from the advancing Soviet forces. This means much civilian traffic on the roads and as the Soviets now are within artillery distance they have been firing sporadic fire missions on intersections and other roads, causing both military and civilian casualty's.
Many civilians are still in ESCHEDE and surrounding villages so you need to take them into consideration when doing your plan. Be aware of East German infiltrators who are transmitting intel to Soviet forces, we have already picked up radio transmission in the ESCHEDE area indicating we have indeed infiltrators in our AO.
Any Infiltrator found in our area are to be arrested and handed over to the German police.


2)MISSION:
B COY, 1 Royal Green Jackets are tasked with defending and prepare the bridge over ASCHAU for demolition until all friendly forces are across or enemy forces threaten to capture the bridge when it shall be destroyed by detonation. Once the bridge are blown up B COY are tasked with defending ESCHEDE in EASTERN direction, from the WEST bank until further order arrives.
B COY are also tasked with keeping L283/K20 OPEN for as long as possible, enabling friendly troops and civilians to use the road to march WEST.


3)EXECUTION:
This is up to you! But some valuable information from your attachments are as follows:
i)LIASON OFFICER from A COY (Lt Wilkinson):
Our friendly units on the eastern bank of ASCHAU is as follows:

*A COY 1 RGJ (Callsign 1-1,1-2 & 1-3)
*C COY (1) 4 RTR (Callsign 1-3 & 2-3)
When all of them have passed you are cleared to blow the bridge. Obviously disorganized or lost units can still show up and want to cross the bridge (including fleeing civilians) so do not blow up the bridge to early.
One of my soldiers will be at the bridge counting and reporting the units passing the bridge to me so we can keep a track of them. You can expect the first element of A COY to arrive at the bridge around 6 am (30min into game).

ii)ROYAL ENGINEERS:
It will take the lads about 15min to put all the charges in place and put the bridge in state 1, ready to be blown up on your command. Once the message that the bridge is ready to blow has arrived the engineers can withdraw from the bridge.

iii)FORTIFICATIONS & TRP
In the upper left corner there are fortifications for Challenger, FV432 and Bunkers for infantry plus TRP (Target Reference Points) that you can place wherever you like. Be aware ATGM teams like Milan do not deploy inside bunkers.


6)SCENARIO DETAILS:
i)To "arrest" a Civilian infiltrator you simply kill them with MG fire. Infiltrators are dressed as civilians but have some obvious tools that make them stick out from the ordinary civilians.

ii)To blow up the bridge you need E10 (the engineer party) to stay within 100m from the bridge marked "bridge area" in thin grey line for 15mins where-after you will get a message saying the bridge is ready to be detonated. Once that message has been sent you can detonate the bridge by using trigger 1 "BLOW THE BRIDGE!" with a 6 sec delay. The engineer vehicles need to be alive when you pull the trigger so make sure they are safe!

iii)The RBS70 are replacement for Blowpipe/Javelin Ground to Air missile.

v)Challenger 2 are stand in for Chieftains.

vii)In upper left corner you have TRP, Bunkers and Challenger/M113 dugouts for your defence that can be moved anywhere on map.

viii)Map updates are OWN ONLY + Friendly ID ON.
NULL

Book Reviewer
Christ, no Service Support para as usual..................
The stopped clock of The Belfast Telegraph seems to indicate the
time
Of the explosion - or was that last week's? Difficult to keep
track:
Everything's a bit askew, like the twisted pickets of the
security gate, the wreaths,
That approximate the spot where I'm told the night patrol
went through.

Scenario has be written by a Swede, so OrBat is just dedicated to "game balance"

Book Reviewer
"To "arrest" a Civilian infiltrator you simply kill them with MG fire" - are you sure this isn't the Baghdad Blackwater 2003 scenario?
The stopped clock of The Belfast Telegraph seems to indicate the
time
Of the explosion - or was that last week's? Difficult to keep
track:
Everything's a bit askew, like the twisted pickets of the
security gate, the wreaths,
That approximate the spot where I'm told the night patrol
went through.

Bubbles_Barker said:
"To "arrest" a Civilian infiltrator you simply kill them with MG fire" - are you sure this isn't the Baghdad Blackwater 2003 scenario?
Click to expand...

Missing a propper way to handle prisoners in the game(simply not modeled(yet)), maschine gunning them is the most humane option.
NULL

This is how we usually play around. (first 30 minutes is just getting into position and waiting/scouting for contacts, so you may want to skip them)