If you aint seen it yet:-

Audio feed of what seems a like a terror attack on an airport.

Looks like more emphasis on CT this time...can't wait!

Audio feed of what seems a like a terror attack on an airport.

Looks like more emphasis on CT this time...can't wait!

Looks like its the yanks turn to play "Speshul Forces".

But an October release date? That's miles away! Good job I have Resident Evil 5 and Silent Hill to get through.
www.comixed.com
T

Don't know what units they'll have but I hope they stick with Them.

Taz_786 said:
Don't know what units they'll have but I hope they stick with Them.

i thought he was dead at the end of modern warfare?

"Zorro would batter Darth Vader if it came to a fight, the asthmatic twat."

You would assume he died of his wounds but his death was never officially confirmed.

Really poignant ending though, get sad watching it!

Just watched it, I thought I saw an oil rig right at the end, oh joy
"Follow the Sapper's is a timeless cry."
D

Taz_786 said:
Don't know what units they'll have but I hope they stick with Them.

i thought he was dead at the end of modern warfare?

Capt Price dies but the hidden level at the end suggests that Soap survived and is still active.

Can't wait for this new edition.

A little nerdy, but an analysis of the trailer http://www.youtube.com/watch?v=N3amn4eVXgc 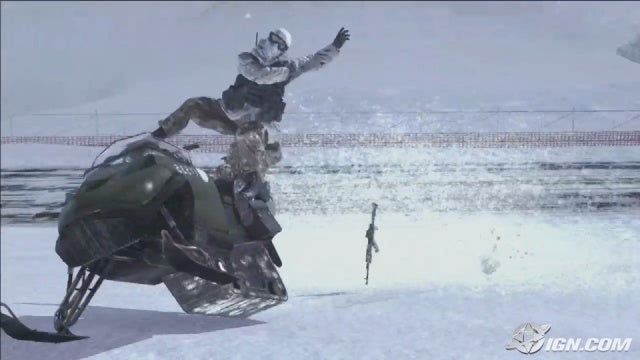 "Them" and snow mobiles? I'm up for that.

See how much hardware you can identify!

Sadly I don't think They will be in it this time around.

Those submersibles look like they're being operated by Navy SEALs.

Wow! can't wait. Hope MS get my 360 back from Germany by October.
Probably off my tits on prescription drugs. Treat what passes my lips with extreme prejudice.
B

GameInformer had a 10 page whopper...

Soap is apparently a Captain, but is a 'Grizzly NPC'
T

Sergeant John "Soap" MacTavish will make an appearance as a NPC, heading up an international force called Task Force 141.

The story of the game is a continuation of Modern Warfare's and deals with the world facing "dangerous political instability in Russia," with terrorist groups trying to hijack Russia's nuclear weapon arsenal.

Game Informer also described a mission which sees MacTavish lead a squad against Russian fighters in snowy mountainous territory, where snowmobiles and ice picks are used.

Gameplay will also be more open-ended than Modern Warfare according to Infinity Ward, but will still follow a linear story.

Unfortunately co-op play through the single player campaign won't be available but there will be separate missions that can be played cooperatively.
Click to expand...

So it looks like US v Russia with perhaps an international flavour on the US side...maybe They are in it after all!

Book Reviewer
Or if US are the speshul ones this time, then brit inf doing the conventional war bits?
Three Active Blocked Arrsers
1/ 184461 - Believing the X-files was a documentary series
2/ Gray Fox - Being a Nazi (which is rather bad for a Russian)
3/ John_g - Can start an argument in an empty room (which is probably empty as everyone saw him coming)
T

Check out that extraction with the rope at the end.

Stayed up until 3am last night for this. Obsessed? Me? Never!

Released two days after my birthday, oh the joy.
"Follow the Sapper's is a timeless cry."

THEY are in it, look at 0:50 seconds in - bloke jumps over roof, union jack clearly on the back of his webbing.

I'd guess that you play as the chap with the mohawk, as he's the only one pulled out right at the end...

Looks stunning. Released day before my birthday, so I know what I'll be getting. *Hints*
Probably off my tits on prescription drugs. Treat what passes my lips with extreme prejudice.