Brought over from Rum Ration - Review by @rebbonk

A book to be read and contemplated: one that requires some thinking about, preferably with a good single malt whilst sitting beside a glowing real fire in your favourite old armchair. This is a book that deserves some serious respect; in many areas I found it to be quite an ’eye opener’.

The book isn’t, nor does it claim to be, a complete history of WW2. There is however, a rather good time-line of the key events from WW2 early on in proceedings and I found it very valuable to be able to return to it as I progressed through the book. The book also appears to be very well researched and about one third of the book is given over to the authors sources and references; something that always inspires confidence.

So if the book is not a detailed history, then what is it? It’s an overview of many of the key players and much of the detail on them and their thoughts is provided from diaries written at the time: not recollections written as an after-thought once the outcomes of events were known, nor blatant rewrites of events to show people in a better light than they deserve; as certain other authors are guilty of. 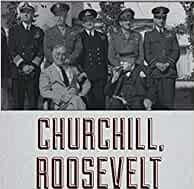 ​
I’m not going to say that this is the easiest of books to read, I had to read and re-read several parts more than once to understand what was being said, and I had my trusty iPad on standby to make on-line searches as things came up that I needed further clarification about. But, in general terms, this book is a well thought through, well written, treatise on a few individuals that possibly had a larger effect on WW2, its outcome, and the after-years, than maybe they should have.

As I’ve said in some of my past reviews, I know very little of the actual detail of WW2, but my interest lies in the cold war that followed. This book helped explain a lot. Personally, I never really saw a ‘special’ relationship between the US and the UK; this book fleshes out some foundations to why those views might be correct. There was a profound distrust on both sides, that as far as I can see, still exists today.

This book shines an inconvenient light on the degree of this mutual distrust, and in many cases dislike (if not outright hatred) among the many military and political voices on both sides of the Atlantic. It shows the depth of wariness from the US regarding British motives (restoration of The Empire?) among Roosevelt and his staff, and more revealingly, details the preferential treatment Roosevelt gave to Stalin over Churchill as the war progressed. - Something I was completely unaware of until I read it in this book, when several ‘pennies’ dropped into place.

I’m more than happy to run to 41/2 anchors on this one. I don’t think I ever turned more that a couple of pages without learning something new, something that I was soon scurrying to search the internet for, something that added to my admittedly deficient knowledge of WW2 and its immediate aftermath. I’d suggest that even those well versed in WW2 could find a few nuggets in this one. Unfortunately, it’s currently on Amazon at £16.52 in paperback, and I feel that’s a touch pricey.

Churchill And Eden – Partners through War and Peace