Churchill And Eden – Partners through War and Peace

Written by noted romantic David Charlwood, this is a light-hearted romp through one of the great unsung romances of the 20th Century, full of laughter, love and yes, a few tears. Okay, it isn’t. It is exactly what the title says, a record of the interactions between the greatest Statesman the UK has ever produced, and the man doomed to follow in his footsteps. What this book covers is those interactions and very little else, a useful filter when one considers the backdrop to their relationship: the most cataclysmic three decades of global history, with the pair of them centre stage for much of it.

Eden’s first meeting with Churchill was directly following the first World War following a constituency hustings. Winston was already a political big beast, whilst Eden was a young student (and war veteran with a good MC, having been the youngest Brigade Major in the Army during the Great War). The experienced campaigner made a deep impression on Eden. The earliest significant meeting between the two was in the south of France in early 1938, where along with Lloyd George the three were holidaying separately, and had arranged to meet at Churchill’s instigation. Eden was early, Winston was late. At the time, Winston was in the political wilderness, whilst Eden was the youngest Foreign secretary ever to have been appointed. This really was a model of their relationship: Eden was an extraordinarily gifted and ambitious statesman whose talents were well known, whilst Churchill was, well, Churchill. He was always the brightest star in the firmament, the standard against which Eden would forever be measured (and perhaps unfairly, found wanting).

The book is a hardback of 285 pages with a few well selected photographs, rather pricey at £25. To the author’s credit, it is not an in-depth record of the conduct of the Second World War or the Cold War which followed on, Charlwood retains his focus on the events which overlap between Eden and Churchill. The pace is rapid, but whilst the book rattles through the war years at a ferocious pace there is no feeling of explanations of key events being left out (although for a reader unfamiliar with the conduct of the Allies that might not be the case). The post-war travails tend to focus on Eden even during Churchill’s final Premiership, particularly on his frustration at having to wait so long for the old lion to make way for him. Much is made of Eden’s excellent statecraft in brokering the end of French involvement in Indo China (and almost singlehandedly preventing a wider east/west conflict in the Geneva negotiations), with some justification, and leading to the eventual passing of the baton from Churchill to Eden.

What is made less clear by the author is how Eden misjudged the actions of other leaders two years later (although it’s not really within the book’s self imposed parameters, two chapters are devoted to the Suez crisis, and don’t really give a clear picture of what Eden got wrong). Tellingly, the chapter finishes with a quote from Churchill on what he would have done in Eden’s place: “I would not have dared, and if I had dared, I would not have dared stop”. 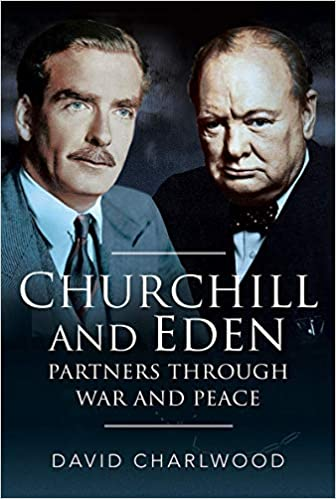 The tone of the book is scholarly, but within that there is an unfortunate tendency to take sides and shade the story accordingly - I think it’s fair to say Charlwood isn’t a big fan of Winston. This antipathy tends to bleach out Churchill’s finer qualities and lead to him being discussed mainly as an obstacle to Eden’s plans. Whilst there is some truth to this, it’s far from the whole story and detracts from an otherwise excellent book. It is an engaging and informative read, but one which relies on the reader having more than a basic knowledge of historical events. Overall, I’m happy to include it on my bookshelves, and would recommend it as an alternative view of the relationship of two great men - not to be read in isolation.