China - and the dangerous drift to war in Asia

Lola18 said:
it's kinda crazy this thread is still alive from 2013
Click to expand...

It was started by the "drama merchant of a thousand user names" to make one of his usual incomprehensible announcements, but it morphed into a convenient thread in which to discuss any east or south Asia topics of interest. It's not unlike many other ARRSE threads in that way.
NULL
J

lokiuk said:
So they really expect us to believe the Chinese ability to shoot straight depends on whether Sum Yung Gy is cracking one out
Click to expand...

I suppose if they were cracking one out during a battle, it would.

john_singh said:
I suppose if they were cracking one out during a battle, it would.
Click to expand...

If they're able to get a stiffie during a battle, India'd better just surrender now.
Once during a fever I remembered that when a European is dying, there is usually some sort of ceremony in which he asks the pardon of others and pardons them. I have a great many enemies, and I thought, what should my answer be if some modernized persons should ask me my views on this? After considering it, I decided: Let them go on hating me. I shall not forgive a single one of them.

So with China now having Pakistan and Sri Lanka as indebted vassals and China going on about a "self defensive pre-emptive counter attack" India is in a bit of a poor position. Surrounded, outnumbered and outspent.

As much as Modi likes to play the hard man, they've got him but the curlies.

Resasi said:
Meanwhile the threats to India ramp up.

“In a potential self-defence counter-attack, China will secure its own territory and not likely claim Indian territory after emerging victorious, but the battle will deeply hurt India so much that global position and economy would go backwards to decades ago.”

The CCP really does seem determined to divert attention from any COVID enquiry by some sabre rattling.

You seem to think this isn't planned.

Perhaps China needs the rest of the world to blame it, become the bad guy and then have all the diplomatic reasons for hostile expansion removed by others...

Extremely convenient for the HK scenario one could say.

AsterixTG said:
Extremely convenient for the HK scenario one could say.
Click to expand...

The new HK security law was permitted under the handover agreement and Article 18 of HK Basic Law (the mini-constitution we arranged before legging it).

They don't need anything else to be able to impose closer control before the expiry of 1C2S now that HKers have broken their end of the deal.

In the event that the Standing Committee of the National People's Congress decides to declare a state of war or, by reason of turmoil within the Hong Kong Special Administrative Region which endangers national unity or security and is beyond the control of the government of the Region, decides that the Region is in a state of emergency, the Central People's Government may issue an order applying the relevant national laws in the Region.
Click to expand...

SkippedOnce said:
Free right of navigation, but an indication of continued and growing PLAN submarine capabilities.

'The Japanese Maritime Self-Defence Force (SDF) confirmed at the weekend that a “foreign” submarine had been detected near Amami-Oshima between Okinawa and Kyushu. It did not surface nor identify itself. Japanese warships and land-based surveillance aircraft then tracked the submarine for several days, watching closely as it moved from the Pacific Ocean into the East China Sea.

'Japanese government sources told local media the submarine remains unidentified, but that they believed it to be Chinese. Military forces are usually deliberately vague when it comes to identifying submarines. This is to conceal the accuracy of tracking technology – such as sound, sonar and infra-red signatures. The submarine “may have tested Japanese and US anti-submarine warfare capabilities,” an SDF source told the Japan Times. Another government source reportedly said the submarine may have been “trying to stir things up as another part of China’s maritime advances” – an oblique reference to the situation in the South and East China Seas.

'The move is being interpreted as a signal by Beijing that it has advanced navigational knowledge of the Japanese seabed and submarines capable of exploiting this. In response, the Japanese SDF dispatched two warships – the destroyer Ashigara and the helicopter carrier Kaga – and P-1 maritime surveillance aircraft to follow the submarine’s movements.

'Under the United Nations’ Law of the Sea, a submarine must surface and raise its national flag while transiting territorial waters that extend 22km from the shore. This does not apply to contiguous zones – areas sharing a common border in which a nation can exert customs and immigration control extending an additional 22km beyond territorial waters. The submarine passed through a narrow 10km territorial gap between Amami-Oshima Island and the Tokara Islands. This was as close as it could come to an outright violation without actually doing so.

'It’s the first time Japan has admitted to observing a submarine in its contiguous zone some 375km northwest of the significant inhabited island of Okinawa. Beijing’s expanding submarine fleet has been of growing concern to regional navies. By 2030, it’s predicted to number some 60 quiet diesel-electric boats and about 16 nuclear-powered attack submarines.' 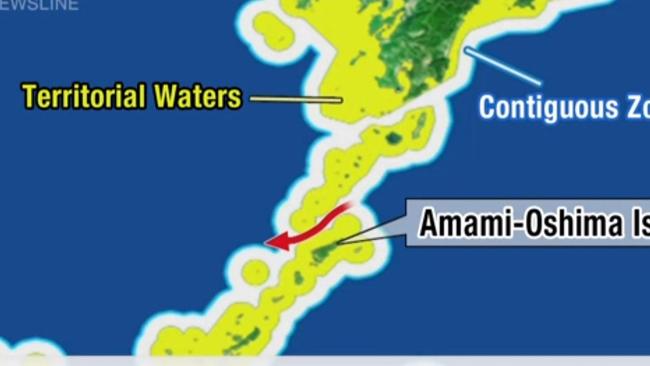 China flexing its muscles to Japan

China has been lashing out at rivals during the coronavirus pandemic, from a brutal brawl with Indian soldiers high in the Himalayas to a diplomatic war of words with Australia.

The basing of the new MSDF Kawasaki P-1 at Kanoya with 1 Kokutai, some way towards the southern tip of Kyushu is not unrelated to the threat from China. The MSDF Kokutai, number 5 at Naha will likely be the next Kokutai to be on the receiving end of P-1 deliveries once the Kanoya unit has fully re-equipped.
Facebook-if it didn't exist the communists would have to invent it.

Eat, drink and be merry, for tomorrow you may be in Utah!
R

Each of China’s recent naval exercises has been met by a ‘see you...and raise you...’ by the USA. Two American aircraft carriers, the Ronald Reagan and the Nimitz, teamed up on Saterday for freedom-of-navigation operations as China’s military conducted exercises nearby.

The deployment — the first of its kind since 2017 — is likely intended to send a message to Beijing amid rising tensions.

These naval forces are definitely not there ‘by’ the ‘pleasure of China’ but more perhaps for a pointed ‘reminder’ to China, that there are bigger more experienced Naval forces on their doorstep, that are ready to exercise the freedom of navigation in ‘International’ waters.
R

The recent Chinese threats and economic moves against Australia are sharp and pointed reminders of China’s economic hold over Australia and its complete rejection of any kind of COVID 19 investigation that Australia had suggested should be carried out.

China has been steadily increasing its economic colonialism around the globe through loan/debt strategy. Massively in Africa, in Pakistan, and increasingly around the Pacific where strategically useful for its massively growing Navy