The Chief of Defence Staff has visited DMS Whittington, in Staffordshire, to officially open the new head office of the Defence Infrastructure Organisation (DIO).

Continue reading...
This is an automated feed from the Ministry of Defence website
K

What's happening in Wyton then?

"Additionally, the building was designed around an oak to avoid needing to fell the tree, which was planted by the Cheshire Regiment as a sapling in about 1969. The sapling is believed to originate from a tree grown from an oak sprig given to the 22nd Regiment of Foot. They were predecessors to the Cheshire Regiment and were given the oak sprig by King George II in gratitude for saving him from capture at the Battle of Dettingham in 1743."

Oh he does like a bit of dressy up doesn't he? 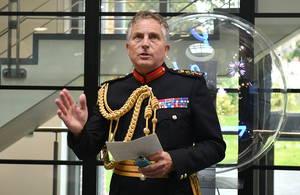 “ Sometimes people don’t want to hear the truth because they don’t want their illusions destroyed. ."

Is that an eCig in his left hand?
I will dedicate my every waking hour working toward the day a chicken can cross the road without having its motives questioned.

Toastie said:
Is that an eCig in his left hand?
Click to expand...

Probably to balance the Warminster Point.
“ Sometimes people don’t want to hear the truth because they don’t want their illusions destroyed. ."

twentyfirstoffoot said:
Oh he does like a bit of dressy up doesn't he?

Thieving bastard.... so that's where curtain pulls for the parlour went!
This definition tells you all you need to know about 'PC'
PC, aka, Political Correctness, is a doctrine, fostered by a delusional, illogical minority (Liberals/Socialists) and promoted by the mainstream media, which holds forth the proposition that it is possible to pick up faeces by the clean end.