Changing Roles – Women after the Great War by Vivien Newman

I started this book with some trepidation, fearing it would be the usual ‘leftist propaganda with an Agenda’ that passes for historical research nowadays.

I was very pleasantly surprised. Whilst focussing on female progress after 1919, it is a very readable description of ladies who changed the world, in ways more subtle than we can understand today. From the lady who started Save the Children (as an attempt to help starving children in blockaded Germany) to the gang of lady shoplifters in London who could have put the Mafia to shame, the author has picked interesting and unusual ways that early twentieth-century females became successful despite a male-oriented establishment. 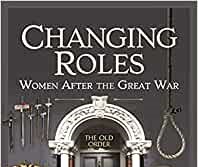 By including a lady who was hanged for murder despite being obviously innocent, she includes material about how public attitude to the death penalty was changing, and how the Establishment fought back against what it saw as monstrous, emancipated women refusing to return to home and children after the great disruptions of 1914-19. She also looks at the differences in public opinion about helping the children of those we had defeated in war, the result of the Versailles Treaty, and the different way the Establishment treated our ally Romania as opposed to our former enemies. The section on Queen Marie of Romania at the Paris Peace Conference was particularly illuminating for me in this respect.

I really enjoyed this book, despite my initial reservations and would recommend it to anyone interested in social history, or early twentieth century history.