supermatelot said:
Dunno where else to put this:

We had Luna, one of our 2 rabbits had to be put to sleep this morning. She could not stand up today and had suffered lots of weight loss the past week. Vet said she had a tumour that we would not have known about and- surgery of that nature on a rabbit in her then state would likely kill her anyway.

She lived in the hutch out back with Timmy. He knows she has gone. The spot she was last at now has all the bedding & paper ripped away and he's just sat staring at it.
I can see in his eyes he is grieving.

Has anybody here experienced this when they have had 2 rabbits kept together?

We have 2 cats inside the house, Odin and Loki. Odin is only 4 months old and still learning the ways of the cat. Bringing in Timmy to run around isnot really an option.

My 8 year old lad is heartbroken. My daughter, in typical 6 year old fashion has also proudly announced "Well I'm not upset because MY rabbit is still ok".

I've just been out to the hutch and I'm not exagerrating when I say- I could see sadness in his eye/demeanor and it made me feel quite sad.
(We thought Luna was around 2 years old- we got her as a rescue rabbit. The vet has tild us she was probably mayber 4 years older than what we thought). Timmy is rescue also. We think he's 4.
Click to expand...

I am so sorry to hear this. Always a nightmare losing a family member. Could you try the cats with the rabbit? Rabbits are very strong and cats are usually scared of them - in my own house the pecking order is clear it is
Girl Rabbit, Boy Rabbit, Me, Girl Cat, Daughter, Boy Cat.

Slightly longer term there are rescue centres which let you try out how your rabbit gets on with a potential companion rather than just getting a second rabbit, after all 4 years old is not old in rabbit terms - he should have many years ahead. Buying one is a little riskier in terms of bonding - then you have to let them get used to one another.
I drink and I know stuff

I'm not altogether sure if it's hide and seek with the crow time, if he's playing at being a panther or if it's just a nice cool spot on a hot day 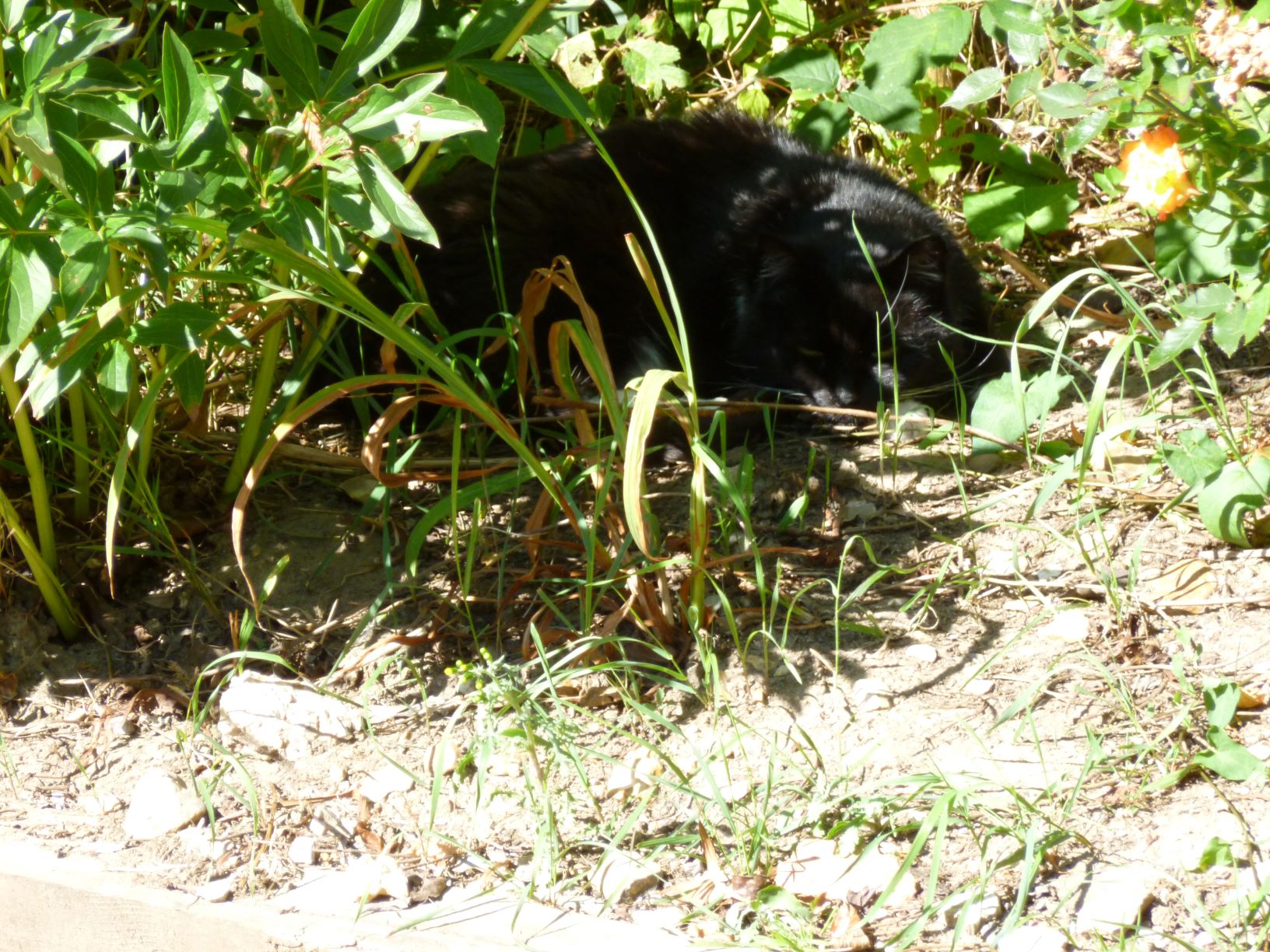 He has such a hard life!
(Not to mention his own sofa, daysack and sleeping bag) 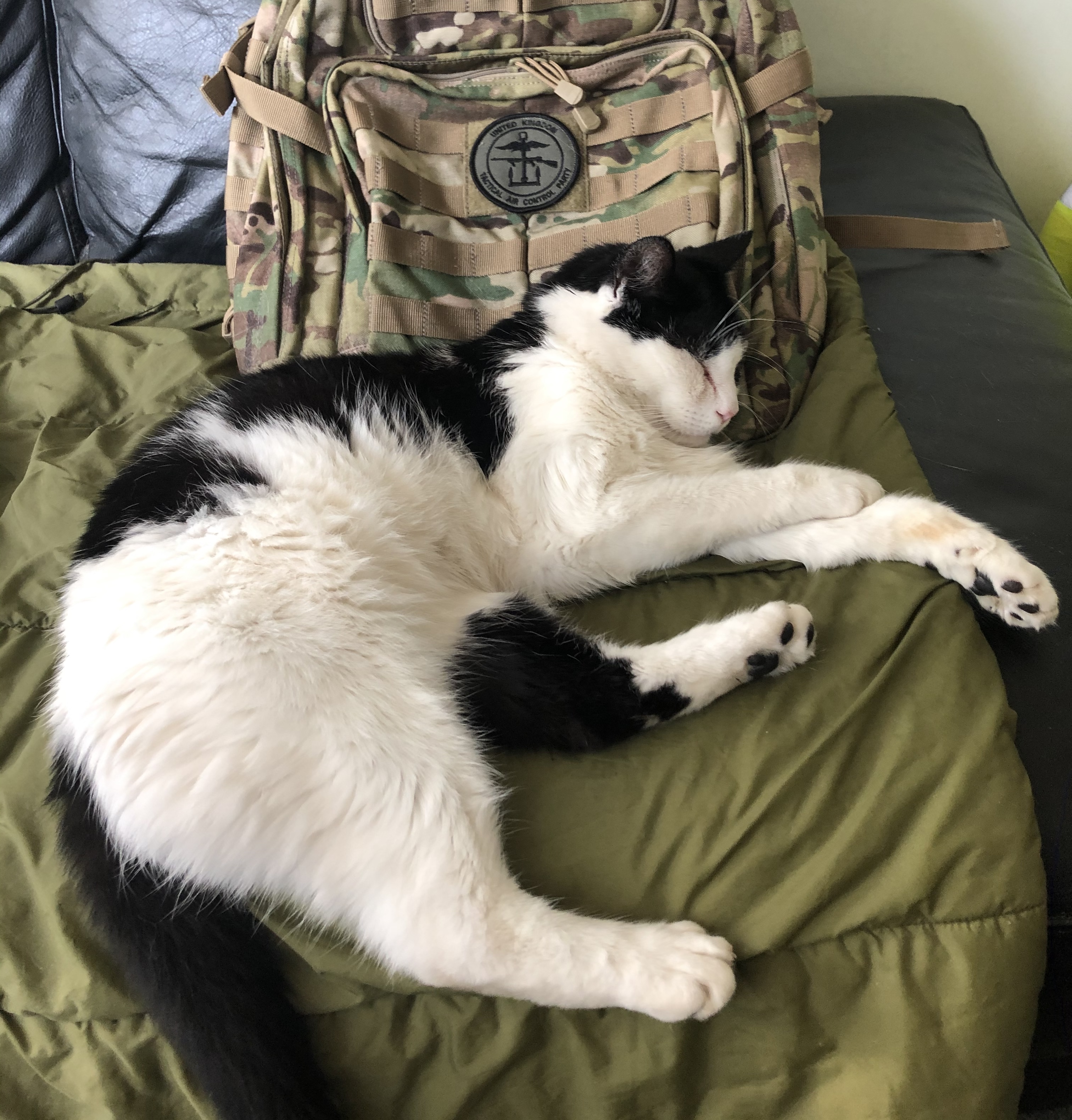 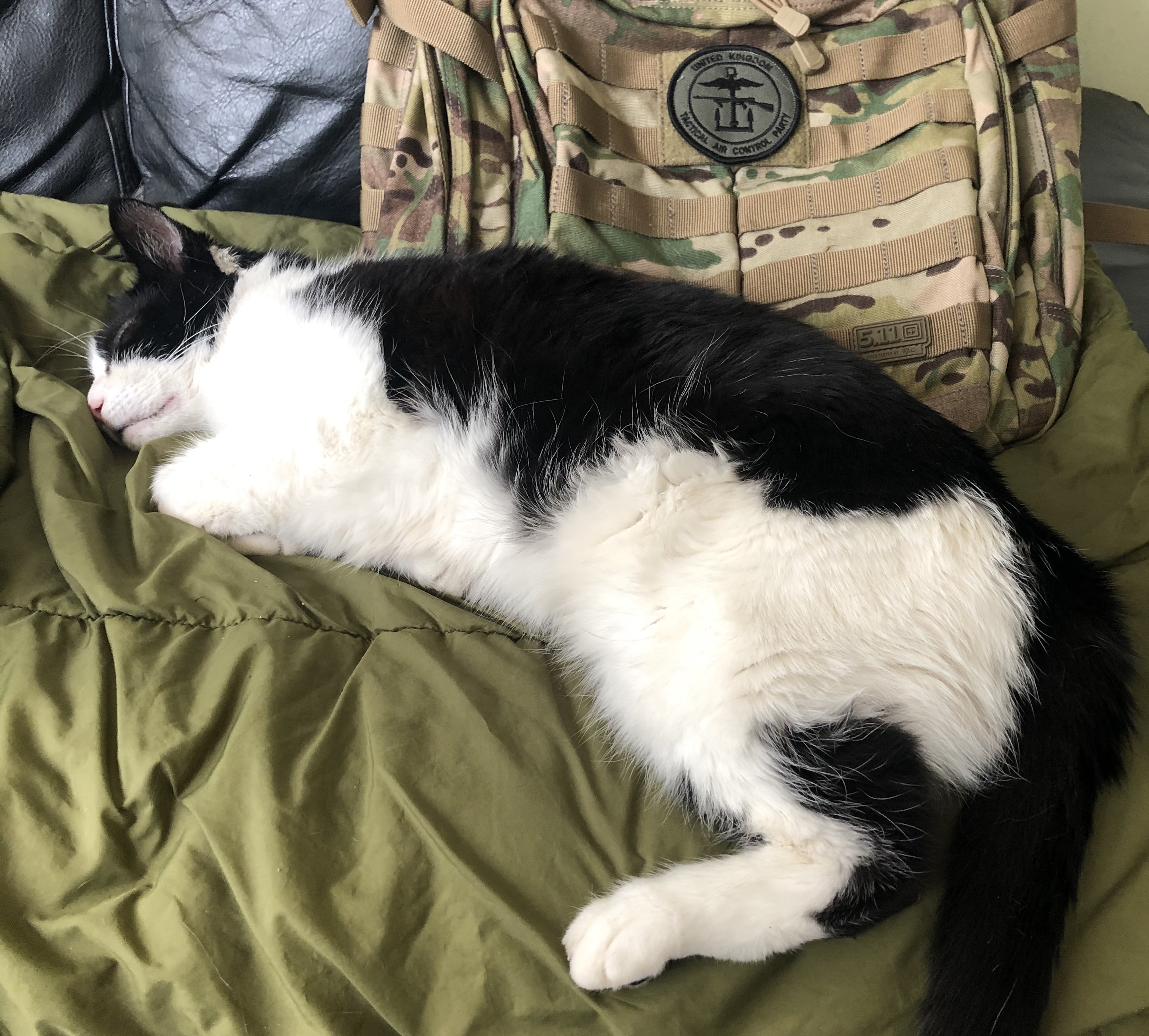 Edit. That change of position is the most activity he’s done all day!
NULL

He spoils you, letting you use them occasionally.
Once during a fever I remembered that when a European is dying, there is usually some sort of ceremony in which he asks the pardon of others and pardons them. I have a great many enemies, and I thought, what should my answer be if some modernized persons should ask me my views on this? After considering it, I decided: Let them go on hating me. I shall not forgive a single one of them.

smartascarrots said:
He spoils you, letting you use them occasionally.
Click to expand...

I have to pinch them when he’s not looking, then suffer the ‘Jarvis scowl’ when I get back.
NULL

Book Reviewer
This was Arry the other day, I'm sure he was comfortable! (Excuse the crap pic, taken on the wife's phone). 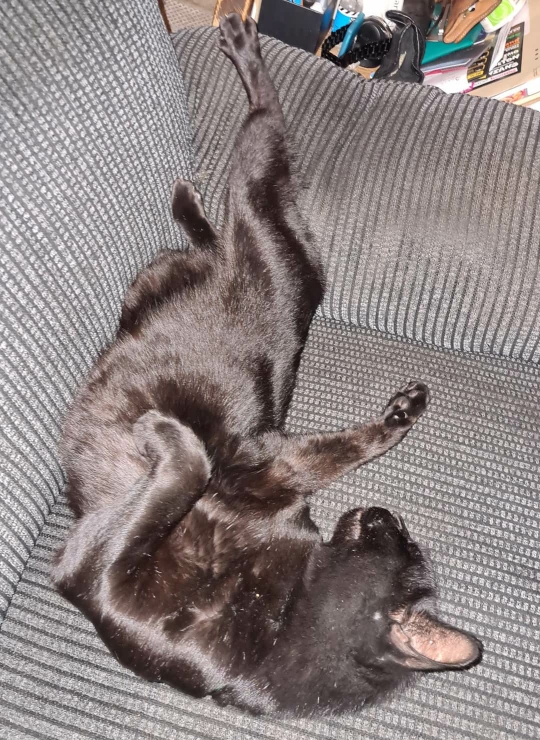 Sent from my SM-N976B using Tapatalk

"It's not the bullet that's got my name on it that concerns me; it's all them other ones flyin' around marked 'To Whom It May Concern.'" -Unknown
People sleep peaceably in their beds at night only because rough men stand ready to do violence on their behalf - George Orwell
Si vis pacem, para bellum
W

Im looking for a tactical kitten harness so the deployment kitten isn't prancing around in a bright red harness. Tongue in cheek, naturally.

Anyone got any ideas?
NULL

CrashTestDummy said:
I'm sure you'll have some blankets somewhere she can sleep on
Click to expand...

Certainly. On his bed, between him and Frau Stacker.
"Justice tastes like hairy Bovril!" - The Righteous RTFQ

WhiskeyTango said:
Im looking for a tactical kitten harness so the deployment kitten isn't prancing around in a bright red harness. Tongue in cheek, naturally.

Any para/SF riggers there? Get them to knock up something warry.
"Justice tastes like hairy Bovril!" - The Righteous RTFQ 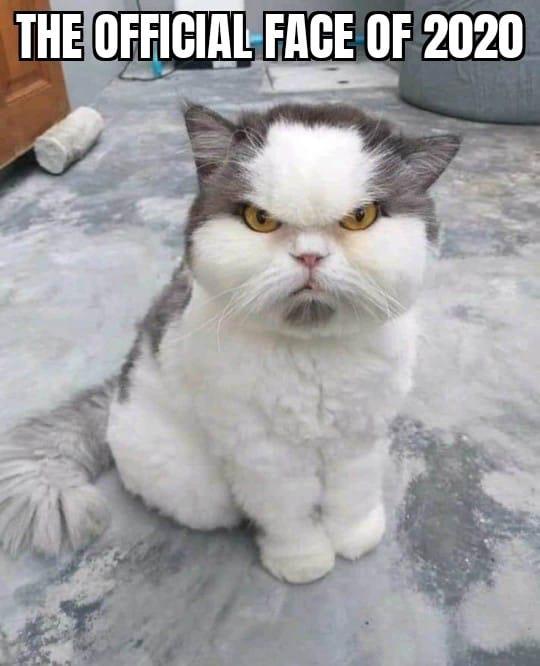 Zeus has found a new disguise - as a Terry Pratchett book. He feels it is very cunning and no one will see through it 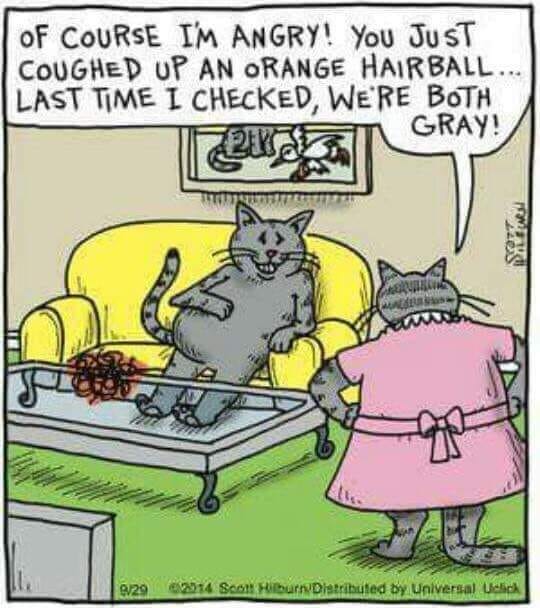 Cregg Bristle said:
He has such a hard life!
(Not to mention his own sofa, daysack and sleeping bag)

Edit. That change of position is the most activity he’s done all day!

WhiskeyTango said:
Im looking for a tactical kitten harness so the deployment kitten isn't prancing around in a bright red harness. Tongue in cheek, naturally.

etsy.com/market/camo_cat_harness
Life should NOT be a journey to the grave with the intention of arriving safely in an attractive and well preserved body, but rather to skid in sideways, a glass of rioja in either hand, body thoroughly used up, totally worn out and screaming WOW!!! WHAT A RIDE !!!!!!!!!!!

NSP said:
You could do what I do and put your hiking kit away in the cupboard when it's not drying/in use...
Click to expand...

It’s usually a case of get home, put kit down, turn away briefly to bring in more kit, turn back, cat already in place! (Also he likes it, and I’m too much of a softy to take it away from him)
NULL

PhotEx said:
seen the price of a Bengal!
Click to expand...

What do they cost??

Having a grey, a tabby and a ginger that does happen a lot

DavidBOC said:
What do they cost??
Click to expand...

I think that cats and dogs do mourn.
About 11 years ago I had an elderly springer spaniel and a 10yo small white (and rather stupid) cat. The dog seemed to regard the cat as her odd looking puppy and they always slept curled up together.
I was on vacation in Florida and both were at the vets, housed in the same kennel pen. I got a call that Creampuff the cats kidney failure was worse and she had gone blind and was very confused and distressed so I authorized them to put her down. When I came home and got Lizzie the spaniel home she was searching the house non-stop looking for her cat. It was sad to see. It took about 2 months for the cat searches to taper off and stop.

Sorry about the bunny. They are nice pets. A cousin had one as his younger son was allergic to dogs and cats. When my cousin would got for walks the rabbit would go along and walk like a dog at heel a few feet from him. In Maine there are both wolves and coyotes but my cousins always brought along Messrs Smith and Wesson anytime he was outside the house. The rabbit lived in the house, had the run of the house and peed and pooped in a litter box. Only problem was rabbits chew things and once it chewed his body armor damaging it. His department had bought it but he had to pay for the replacement, around US$600 I think he said.

A government that robs Peter to pay Paul can always depend on the support of Paul - George Bernard Shaw
You must log in or register to reply here.