slinging his hook at last

that waste of space is getting booted out of the UK , he WILL go even if he appeals and goes to court he WILL go http://news.bbc.co.uk/1/hi/uk/2919291.stm

I don't know why everybody is so happy NOW about Hamza being booted out.

He has been saying everything and more for the past FIVE years, and it's only now that that ****** Blair is in fear of his votes in the local and Scot and Welsh assembly elections that are are going on now and into May that he decides to do something now.

I think this action is long overdue by years, and I for one won't be patting anybody on the back for doing something now just for votes that they should have done a few years ago, and didn't because they are a bunch of politically correct New Labour *******

Bollocks to the new laws and bringing them in and appeals, kick the cnut out now and worry about the rest later. He apparently has dual nationality with Egypt, so get rid now to there.

And what do they plan to do about the Saddam Hussein Mosque in Birmingham? Or is that just too radical a step to take?
B

Hopefully there will be a few more gonig the same way very soon!!! 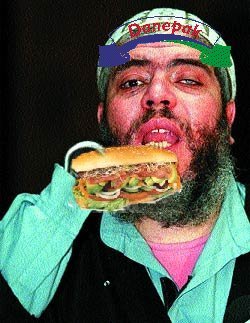 why not give him citizenship? look what he's done for the good of the country!! and for all governments to remain consistant don't forget, not to give it to that geezer who owns that corner shop in London, Al Fayed or something i think his name is, right dangerous geezer!!

Outrage! aka Scottish Independence Round 2
2