"Butchered bodies of about 30 soldiers"?

par avion said:
Could be Aden 1967 in crater where a number of soldiers from 1 RNF and 1 A&SH were ambushed and killed by the Arab National Police. A number of soldiers from the RCT returning from a range day in a bedford RL were ambushed as they were passing the Police lines. There was stand off for a few days until Mad Mitch and the Argyles went into retake Crater with bayonets fixed and pipes playing.

I think there were over 30 dead. The dead bodies of the soldiers from patrols ambushed were abandoned when the British withdraw. After the bodies were retrieved after Mad Mitch's reoccupation there was allegations that some of the bodies had been mutilated by the locals.
Click to expand...

An eyewitness account of events during the Armed Police mutiny part way down this page:

Regiment include the Royal Army Regiment, the Liverpool Lancers and the 50 th battalion English Guards .
Click to expand...

Don't forget the Sniper Regiment. 'Eroes to a man.
I'm not happy about our position in the narrative structure of this war.

Busterdog said:
Aye... and the casualties would have been much lower had 'Touch Me' Towers not refused to allow the Saladin to fire its main armament!
Click to expand...

"Shortly after the 3 vehicles had pulled out back along Queen Arwa Road a Saladin of QDG advanced back up it towards the Barracks in order to lay down fire on it.

The vehicle commander, Lt Stephens requested permission via radio to use the vehicle’s main armament, a 76 mm gun, against the Barracks - he wanted to knock out the Bren Gun team sited on the roof but could not use the AFV’s main armament without permission from Aden Brigade HQ.

Permission was denied. Under heavy fire, able only to fire a machine gun, with the turret hatch damaged & unable to be closed, fearing imminent attack from RPGs, this vehicle withdrew without being able to recover Davis & his 3 men.

The fates of Davis, Crombie, Smythe & Stewarts were sealed, none of them were seen alive again."

They may have been captured alive but as with Major Moncur & his party it is to be hoped that they were not, as reports were received that the bodies of 3 of them were placed on mock trial, mutilated & hanged" 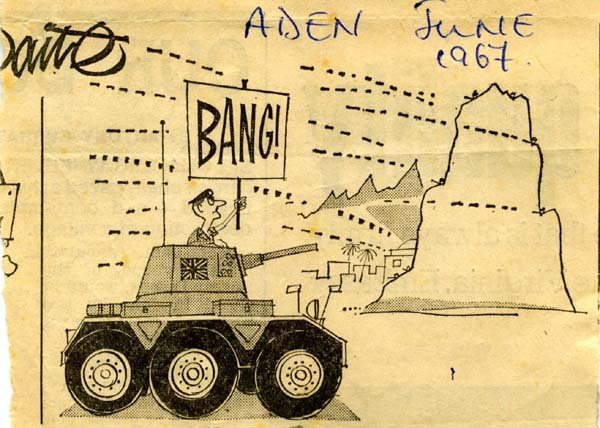