So in lieu of the Marineflieger taking their First NH90 NFH (Nato Frigate Helicopter) Sea Lions over the last year replacing the Legacy Sea King. So it’s now their Sea Lynx is being replaced by yep you guessed it another NH90 NFH this time called Sea Tiger and 31 airframes being ordered . 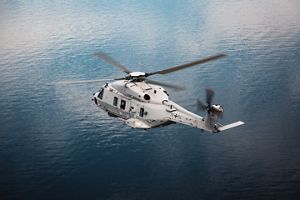 The German Bundeswehr has ordered 31 NH90 NFH helicopters, to be known as Sea Tiger, for the German Navy’s shipborne operations.

Two does go into One

Wildcat is simply too expensive and too small to gain the market share Lynx did.
proudly boycotting Pret a Manger

PhotEx said:
Wildcat is simply too expensive and too small to gain the market share Lynx did.
Click to expand...

Wildcat and Mh-60R Seahawk were competitors.

Grim_Squeaker85 said:
I'm probably misremembering here, but, wasn't there lots of problems with the NH90?
Click to expand...

There were and are ....and depending on which operator you talk to. The colonials down under not happy and looking for replacement, the Kiwis seem ok (one of my clients contacts flew Kiwi NH90).

Spain seems ok re their FAMET army aviation and as a First their Air Force took delivery of NH90 for CSAR replacimg the Super Puma.

Swedes grumbled hence why they quickly bought UH-60M while awaiting their high cabin NH90 TTH delivery for Afghan ops. they haven’t said much about their NFH one delivered the other year.

Dutch were not happy for corrosion issues and they had fatal accident out in Carribbean in the last year.

Omani had an accident and loss of NH90 but haven’t heard rumbles from them .

Finland seem ok. ..their NH90 are a Star at RIAT since 2013. Met their crews over the years and even Military Helicopter International and they seem Happy enough.

Italy seem ok, mates son flew it in their NFH variant for their Marina and he hasn’t complained ( he now flies HEMS in civvy street).