Frank Bullen was an author who died in 1917, who was famed for writing stories of sea voyages, based on his long career as a sailor in the nineteenth century. He wrote thirty-seven books, hundreds of magazine and newspaper articles and delivered many, many public lantern slide lectures across the British Empire and USA. He was a contemporary of Joseph Conrad, but a new name to me, so I chose this book with enthusiasm. 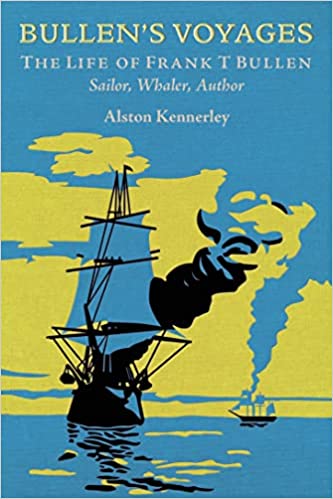 The book starts describing his early childhood in dense housing north of Paddington Station, not a salubrious start in life. Times were tough and he family moved house often, his parents separating when he was eighteen months old. He and his sister were raised by a maiden aunt, which brought them some stability. At the age of twelve an uncle arranged for him to be taken onto the crew of a ship which he captained, and his career as a sailor began.

I really enjoyed and learned from the descriptions of voyages, difficulties of operating sailing ships, stingy owners, inadequate equipment, food ropes and sails, and the many destinations he visited. Even the descriptions of whaling expeditions held my interest, despite my not being keen on the activity.

I learned a great deal about the life of a Merchant Sailor int he 19th Century - the cost and requirements for passing certificates, poor and insufficient food, the uncertainties of being ‘paid off’ at the end of a voyage, bribery and corruption between chandlers and captains, and the ‘crimps’ and unscrupulous captains who preyed on unwary sailors to separate them from their money. I had no idea that a merchant sailor’s life was so hard and grinding.

The author has clearly done a huge amount of research, and writes clearly and well. However the central section of the book becomes rather a samey series of voyages and difficulties. I am glad I persevered to finish the book, as the later chapters, where Bullen finds success as an author, lecturer and traveller, were very interesting.

I found this book a very interesting insight into an area of social history I didn’t know about, and would draw it to the attention of anyone who believes that upward mobility didn’t happen in the 19th Century. This man was born in a London slum, raised by relatives when his parents separated and ended up travelling First Class to destinations around the world, a well-respected author, a lecturer who sold out venues in many countries, and whose life ended in the quiet peace of Madeira.

I will look out for this one. There are plenty of hooks in your review which have caught my attention and interest.

Thanks for that review: my paternal Grandmother's family are from a Bullen line, of whom the Great, Great Grandfather, George, emigrated to GodZone ~mid 1800s. So, I'll peruse Frank's life story with interest ... maybe it'll give me a[n ancestrally-] tenuous claim to fame, albeit somewhat 'removed'.
OBie,
Expeditionary Logistician, NOT a mercenary!
<<Missa est, Nunc est Bibendum!>>
Proud to have served as an Australian Peacekeeper and Veteran!

PuriPuriManTumas said:
Thanks for that review: my paternal Grandmother's family are from a Bullen line, of whom the Great, Great Grandfather, George, emigrated to GodZone ~mid 1800s. So, I'll peruse Frank's life story with interest ... maybe it'll give me a[n ancestrally-] tenuous claim to fame, albeit somewhat 'removed'.
Click to expand...

He was a superstar in his time. Many national and international newspapers reported his travels, lectures and life. In an age of slow communication, this was a massive achievement.
And this you can see is the bolt. The purpose of this
Is to open the breech, as you see. We can slide it
Rapidly backwards and forwards: we call this
Easing the spring. And rapidly backwards and forwards
The early bees are assaulting and fumbling the flowers:
They call it easing the Spring.
They call it easing the Spring: it is perfectly easy
If you have any strength in your thumb: like the bolt,
And the breech, and the cocking-piece, and the point of balance,
Which in our case we have not got; and the almond-blossom
Silent in all of the gardens and the bees going backwards and forwards,
For today we have naming of parts.

D
The man with the Iron Heart. Biography of Reinhard Heydrich by Nancy Dougherty.