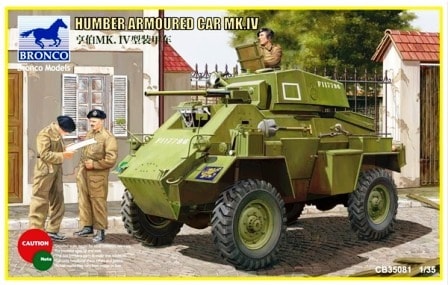 History
Made by the Rootes Group, the Humber was essentially a combination of the Karrier KT 4 artillery tractor chassis and the armoured body of the Guy Armoured Car. The KT4 was already in production for the Indian Army, and Guy were having problems with the production levels required. The Karrier name was dropped to avoid confusion.

The first order for 500 was placed in 1940. The first Humbers were more or less identical to the Guy down to the faults in armour but this was rectified. Production started in 1941.

The Mark III improved upon the Mark II by providing a three-man turret. Mark III production ended in 1942 after 1,650 had been built. With a possible replacement, the 2-pounder armed Coventry armoured car, on its way, the Mark IV was designed. This put the US 37 mm gun in the turret but at the cost of one crewman. The Coventry was not ordered as a replacement and so production of Mark IV continued, for a total of 2,000, despite its flaws.

Contents
For such a small vehicle, this one comes packed to the top in a good size slip-top box. Somewhere around 700-800 pieces make up this kit, giving a good indication of the details provided for. My kit included not only the clear hull and turret pieces, but also the 'regular' opaque counterparts providing the possibility of mixing & matching between the two.

The instruction manual is well deserving of the name and I wish all manufacturers would include instructions this good. Consisting of 40 staple bound glossy pages, the construction sequence spans 50 steps. The front cover contains a potted history of the Humber by Phil Greenwood while the back cover gives special thanks and a web address to view photos of the Vandal restoration project.

Where appropriate, multiple views of the construction are shown along with CAD style insets to ease the construction process. The steps range from very simple (adding two shock absorbers) to very busy and complex, but each step appears to be clearly shown and well laid out. Paint color callouts are provided throughout the assembly guide and although helpful, further research is recommended.

The parts list doesn't show any 'not for use' parts, although some options exist and PE parts may replace the styrene ones. All in all, it's doubtful there will be much leftover for the spares bin.

Each of the five marking options have their own full color page and include:

All finished in Olive Green SCC 15, with the captured vehicle a two-tone green.

The waterslide decals are beautifully printed on a thin, matt carrier film in fine register. Two U.S. stars are included though not shown on the marking options. Dashboard gauges and fire extinguisher placards are also included to add further realism. For a change, I won't rave about lack of decals as they are here in abundance! 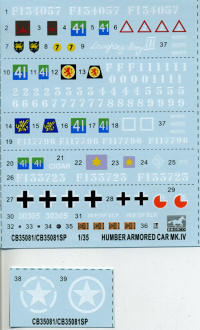 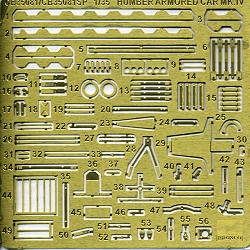 Review
All parts appear to be excellently molded with sharp, crisp details. Flash and seam lines are minimal, and the very few pin marks are in areas that should be hidden. Sprue layout appears to be logical with a minimum amount of part hunting needed.

To get this kit motoring along, construction begins with the engine. No less than 30 parts make up the basic engine and details look excellent. The radiator with respective plumbing along with the transmission round out the first step. The frame rails and sub-frame are constructed with individual cross members to support the running gear and floor pan.

Judging by the instructions, it may be best to leave the hi/lo transfer case shifter (part C91)unglued and the 2-4WD shifter (C92) off until the floor pan is in place. The transfer case and differentials/axles are all multi-part affairs and well detailed with respective linkages and driveshafts.

Front steering is designed to be movable by means of mushrooming the pins using a hot pinhead or knife blade. The leaf spring assemblies have multiple 'not to be glued' areas indicated in the instructions which, I believe, are for alignment reasons when adding the axles and driveshafts.

The tire treads are molded in styrene and have a minimum amount of clean-up. The pattern is very accurate and they appear to be 'factory fresh', so if a worn down appearance is desired some sanding/scraping will need to be performed. The sidewalls and rims are molded together, with sharp and clear markings on the sidewalls. I assembled one of the wheels and it went together perfectly. Since the tires are directional, the instructions are very clear on assembling the right and left sides.

The hull sides are molded separate from the hull top, with the left hand side providing a separate opaque access hatch which looks to be functional. The right hand side is molded closed as the spare tire mounts here. An issue with the clear parts is that some obscure lines are present and, although faint, may detract from the finished model. The same lines are present on the opaque parts but should not affect the painted model.

The hull top has a separate engine access hatch which can be positioned opened or closed. An optional unditching channel can be mounted to the front, if this is not used it's possible the 'drill here' marks will be seen on the clear version of the hull. 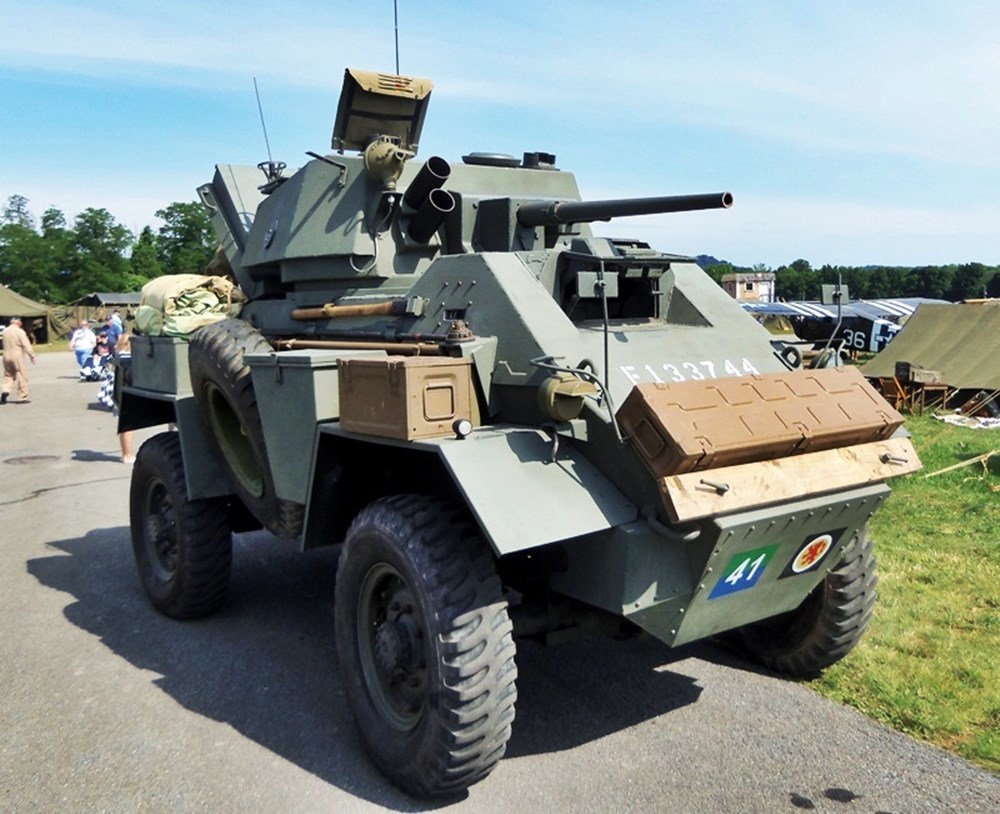 The slide molded turret has a separate base and is molded flawlessly, no cooling lines present. Turret hatches can be modeled opened or closed with excellent details either way. Fine bolt, screw and weld seams are depicted very well on both the clear and standard versions of the hull and turret.

The main gun barrel is molded as one piece with just a fine seam line to deal with. Both the 37mm and Besa have hollowed out barrels. The externally mounted Sten and other included weapons, if used, will need the barrels drilled out for a better appearance. The fenders are loaded with storage boxes, flimsies and other accoutrements with further detailing in the form of photo etch parts. The antenna mounts are included, but strangely enough, no antennas. The instructions indicate to use stretched sprue although no length is given, so unless you buy after-market, you're on your own.

Interior detailing is extensive from front to back covering the drivers and fighting areas. Details such as the finger grips on the steering wheel and separate hand grenades are present. Ammo abounds, with the ammo clips molded on the shells, I think some separate empty shell holders would have been a nice addition to this kit though.
I added a driver and commander figure from MiniArt's British Armoured Car Crew. I chose the two in pixie suits as being accurate for 1944.

Conclusion
If I had the time I could write pages on this kit, it's that complete and that good. Bronco have packed a lot of detail into this armoured car and even with the opaque body/turret, I believe much will be able to be viewed through the hatches and by removing the turret. An excellent model which would benefit from a figure or two.

I've been everywhere and I've seen everything there is, but I never saw the light.
Scared to death of dying so I do my best to live,out of mind and out of sight.
(Kris Kristofferson)
I commend my soul to any God that can find it (Sir Terry Pratchett)
TOTGAF

I have a thing about WW2 UK wheeled soft skin & armoured gear. Brilliant review this is on my list of must have's now. An RRP guide price be handy though.

ches said:
I have a thing about WW2 UK wheeled soft skin & armoured gear. Brilliant review this is on my list of must have's now. An RRP guide price be handy though.
Click to expand...

I don't know, you slave over a review, working your fingers to the bone putting detail in and them some ungrateful wretch asks for a bloody price guide! What is the world coming to

. Retailing for around £35.00 from most suppliers, few on flea-bay for £25.00. The crew set comes out at around £12.00.
I've been everywhere and I've seen everything there is, but I never saw the light.
Scared to death of dying so I do my best to live,out of mind and out of sight.
(Kris Kristofferson)

smeg-head said:
I don't know, you slave over a review, working your fingers to the bone putting detail in and them some ungrateful wretch asks for a bloody price guide! What is the world coming to

Is that all? Cracking price for all that if you ask me.

Lovely and one of my favourite AFVS, despite it being pretty flippin' awful...

Re the decals sheet: there's a bicycle in one of the militaria shops in Ste Mere-Eglise that's fully marked with all the regulation markings for 53 Recce Regiment, as if it was an armoured car. It amuses me every time I see it (it hasn't sold in 10 years) and I'd love to know who the bored squaddie was who decided to paint his pushbike in regulation markings.