The events of 1962-67, sadly now remembered by few and at the time over-shadowed by the Cold War in Europe, were the culmination of 128 years of British involvement in Aden.

“Acquired“ in 1839 due to the strategic demands of the Empire, Aden itself comprised a mere 75 square miles; it's hinterland, however, was vast covering more than 112,000 square miles. Situated at the southern end of the Red Sea and with a safe harbour, it was originally intended to be a coaling station for ships sailing to and from India. The opening of the Suez Canal in 1869 only added to it's prosperity and strategic importance.

Jonathan Walker's meticulous research has made excellent use of recently released archive material and eye-witness accounts as well as earlier historical records. To understand the last few years when British forces were fighting terrorists in the back streets of Aden and the mountains and deserts of it's hinterland and the final bloody withdrawal from Britain's last colonial war, the author gives a detailed explanation of both the historical and contemporary context. 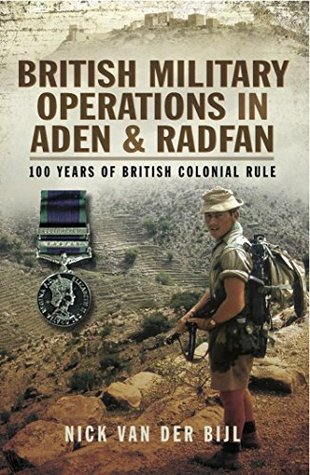 Initially, by signing up whoever appeared to be the leader of the main tribe in an area, using guns or gold as an inducement, a series of “Protective Treaties“ was established which brought some sense of order to the hinterlands whilst appearing to leave power in local hands. This was the Empire building formula that had worked so well in other parts of the world and Yemen was to be no different. Apart from a minor “blip“ following the First World War, when due to the financial strain of supporting the wider area the British government considered giving up all but Aden and it's immediate hinterland, it was not until the end of the Second World War that matters came to a head.

The Cold War, Britain's shrinking Empire and the rise of Arab Nationalism (especially in Egypt), plus the designs of America and the Communist Bloc on the oil-rich Middle East coupled with Britain's dire financial situation were all significant factors contributing to the withdrawal from the remains of the Empire and East of Suez in particular. The inept handling of the withdrawal by the then Labour government further compromised Britain's position. The announcement of the imminent withdrawal made every Briton a target for terrorist factions anxious to enhance their credentials and secure a seat at the table in the post colonial era.

Given the events of today with the rapidly deteriorating situation in Yemen as well as the past few years of conflict in the Middle East, there is a certain sense of irony. Aden presented the British Army with a formidable challenge, expecting to fight on the plains of Western Europe, it's men, equipment and tactics were tested in some of the harshest environments on the planet.

Likewise, British political leadership has also been put to the test and generally found to be wanting. As ever it has been the “PBI“ that has paid the price whilst our erstwhile leaders failed to learn their lessons from history.
Last edited by a moderator: 3 Dec 2020
Click to expand...

Winning Wars the Enduring Nature and Changing Character of Victory from Antiquity to the 21st Century Editor Matthias Strohn.