supermark500 said:
So if he was in the RA militia that was the Victorian equivalent of the TA?

No militia at times the militia were conscripted though I think your Great Grandfather would have volunteered.

I've been following this thread for a while now and much head-scratching has ensued I assure you! The letters PEHN make no sense whatsoever and the preceding letters are unclear except that there seem to be four of them. While looking at the photos again this morning I had a flash of inspiration and the word "EUROPEAN" clicked into my mind. I recalled that some of the "younger" Irish Regiments were originally raised as mercenary forces by the East India Company from europeans living in India (many were ex-British Army men who remained in India after their discharge and later took service with "John Company", the pay and conditions were better than in the British Army apparently) and were later taken into the "Queens service" in the 1880's. There appear to have been a number of "Bombay European Regiments", and ditto Madras, one of these was the later the 2nd Bn Leinster Regiment (109th Foot) while another became the Royal Dublin Fusiliers, 106th Foot. It seems possible then that the title on his shoulder says "European" and that he was a member of one of these "European" regiments prior to or possibly just after their transfer to the British Army? Seems a runner to me!
Try Googling "Bombay European Regiment" and see what you get.

It may be worth your while trying the following on yahoo.
Its a serious group mainly concerned with miltiary research, i'm pretty sure somone on there will be able to help.

You have to register before posting.

supermark500 said:
Sorry to drag this thread up, but this morning I received a reply from the curator of soldiersofthequeen.com about this query that seems to have stumped everyone so far.
Click to expand...

Thank you so much for that link

, I've just spent a whole evening (and incurred the wrath of Mrs F) browsing that excellent site
"If hooking up one raghead terrorist prisoner's testicles to a car battery to get the truth out of the lying little camelshagger will save just one British life, then I have only three things to say; Red is positive, Black is negative, and Make sure his nuts are wet"
P

I think you guys have cracked it!

Googling "Bombay European Regiment" brought up http://www.britishempire.co.uk/forces/armyunits/indianinfantry/indianinfantrypre1857.htm which mentions the Bengal European Fusiliers, the Madras Fusiliers and the Bombay Fusiliers and which regiments they became in the British army. It looks most likely that he was in one of these.
"There is a forgotten, nay almost forbidden word, which means more to me than any other. That word is England." - Sir Winston Churchill
'Leadership is solving problems. The day soldiers stop bringing you their problems is the day you have stopped leading them. They have either lost confidence that you can help or concluded you do not care. Either case is a failure of leadership' Colin Powell
J

supermark500 said:
I think you guys have cracked it!

(Modesty prevents me from saying more of course.)

Sorry! Jaeger, I owe you one!!!
"There is a forgotten, nay almost forbidden word, which means more to me than any other. That word is England." - Sir Winston Churchill
'Leadership is solving problems. The day soldiers stop bringing you their problems is the day you have stopped leading them. They have either lost confidence that you can help or concluded you do not care. Either case is a failure of leadership' Colin Powell
C

Hi
here is a photo of my Grandfather wearing the same uniform.
He was born in 1874 and was missing from the 1901 UK Census and as you can see at the bottom of the photo he was in India at the time it was taken

Several of the most recent posters were very close to the solution. The soldier in the (original) subject photo is a Gunner in the Garrison Artillery's Eastern, Western or Southern Division, as indicated by his worsted embroidered shoulder titles and his 'universal grenade' collar badges.

The addition of the UBIQUE scroll and the 7 and 9 flame variants for RA and RE did not take place until 1924. Before that the universal grenade was used by RA, RE, Fusiliers and even the Grenadier Guards, as well as similar colonial units. This very long standing collar badge finally faded into history with the merger of RWF (who were the last unit to wear it) and the RRW in 2006.

The Eastern Division, HQ at Dover. Depot companies at Dover and Great Yarmouth.

The Southern Division, HQ at Portsmouth. Depot companies at Gosport and Seaforth (near Liverpool).

The Western Division, HQ at Devonport. Depot companies at Plymouth and Scarborough.

The Garrison Artillery was composed of 104 service companies in 1900, forty of them in the UK, 37 in various colonies of the Empire and 27 in India. A company was commanded by a major with 6 or so officers, around 10 NCOs and 100 to 200 men.

The uniform of Garrison Artillery was the same as Field Artillery except that they were more likely to wear trousers instead of boots, spurs and breeches.

The latter photo shows a qualified gun 'Layer', as indicated by the 'L' in laurel wreath badge and also a member of the Prize Battery within his Brigade (an annual competition) as indicated by the crossed gun barrels surmounted by a crown beneath the layers badge. The two inverted chevrons indicate an average of 8-years unblemished service for which he would have received extra 'good conduct' pay. After 1899 the shoulder title changed to a letter to indicate the Division (i.e. 'E' for Eastern) and a number (e.g. '9') to indicate the company, as seen on this man's shoulder strap.

Book Reviewer
RIP
The monthly pay lists for each battery are in the National Archives (with some infuriating gaps).

Once you have a timeline for your man and his battery, for India you can get the 'Frontier and Overseas Expeditions from India, Indian Army Intelligence Branch', 7 vols, (in 1983 Indian reprint) via your public library to look at any operations he was on (apart from lying on his charpoy and polishing his gun). 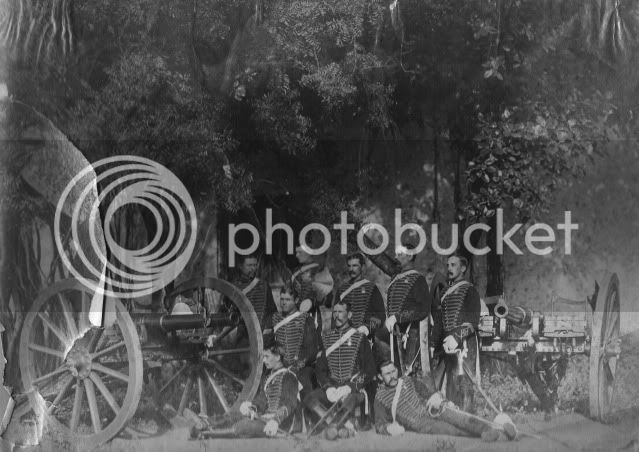 shows it like it was.
' .. the whole character of what Churchill called 'the island race' is being threatened without even the pretence of consultation with those involved.'
Norman Longmate, 'When we Won the War', 1977

Yes, I know this has been a VERY long time and I am resurrecting this thread.

I've done more research on my Great Grandfather who was the origin of this post. I have found out that he enlisted into the 3rd Battalion Essex Regiment before transferring to the Royal Artillery and serving in India for 5 years.
However, I have found three different attestation sheets for him. I can only assume that the dates on them are wrong.
7 June? 1885 #868 3rd Battalion Essex Regiment. Age 18
24 March 1885 #48324 Royal Artillery. Age 19 (Stated as previously 3rd Battalion Essex Regiment)
8 Feb 1888 #1934 3rd Battalion Essex Regiment. Age 18
The signature on all three documents is the same and all the other details are such as Parish, Town etc.
"There is a forgotten, nay almost forbidden word, which means more to me than any other. That word is England." - Sir Winston Churchill
'Leadership is solving problems. The day soldiers stop bringing you their problems is the day you have stopped leading them. They have either lost confidence that you can help or concluded you do not care. Either case is a failure of leadership' Colin Powell
You must log in or register to reply here.