LeoRoverman said:
it's not a free trade deal, fool we're in a customs Union and we pay, it's free within the CU because we've paid. Note the word paid- this means it's not free. Your meal in a restaurant is not free, you have to pay. Either way the fact remains that you are paying well over the odds on the retail side. Tell you what you Buy your suits, Luggage etc in HK and pay the duty and then compare the difference in the high street near you. Bet you'd be surprised. If you travel and buy it may fit into your personal allowance.
Click to expand...

Brexit according to some sources has already cost us £40bn, could cost us another £39bn. And suck up the £350m. A week promised to the nhs.
So tell us more about this future 'free trade' we're getting.

I seem to recall that the exact wording and framing of the question on the ballot paper was proposed by HMG and subsequently approved by Parliament. That sound you are presently hearing is that of a large amount of chickens coming home to roost!! Can't beat a nice bit of Parliamentary sovereignty

SkippedOnce said:
And that's a fundamental problem - don't bother me with details I neither know, understand or care about, just give me the result I want. the great British public acting like VSOs; who'd'a thunk it!
Click to expand...

Sent from my SM-N910F using Tapatalk
It is my Royal and Imperial Command that you concentrate your energies, for the immediate present upon one single purpose, and that is that you address all your skill and all the valour of my soldiers, to exterminate first, the treacherous English, walk over General Frenchs contemptible little Army. Kaiser Wilhlem II, 19 Aug 14 (allegedly!)

My_T_Hunter said:
Ireland's looking at serious economic damage in the event of a hard Brexit anyway, perhaps they see little to lose.

It could also be, that if Ireland is able to offer more routes and more competition to the rest of Europe they see a chance to nab some of the UK's long haul traffic.
Click to expand...

It's a lot more expensive to get to Dublin from Germany (and further eastwards) without using the UK as a transit point between ferries.

Good luck with that then.

For starters: weighbridges for every RoI wagon entering the UK would be a nice. Dipping their tanks would be a cute second. Toll for every journey would be lucious. Tachograph examination every off/on, on/off the ferry should see a nice wedge collected in fines, with automatic confiscation of the vehicle for tacho and/or weight and/or fuel infringements and three months inside per driver... and as for their vehicles meeting UK safety standards..... what would that add on to each of their stabbers-in-the-back journey in time and costs? Of course, fresh arable produce should go to the back of the queue at the docks.

That's probably one of the considerable upsides we hear so little of
And despite us holding all the the cards on the easiest deal in history. 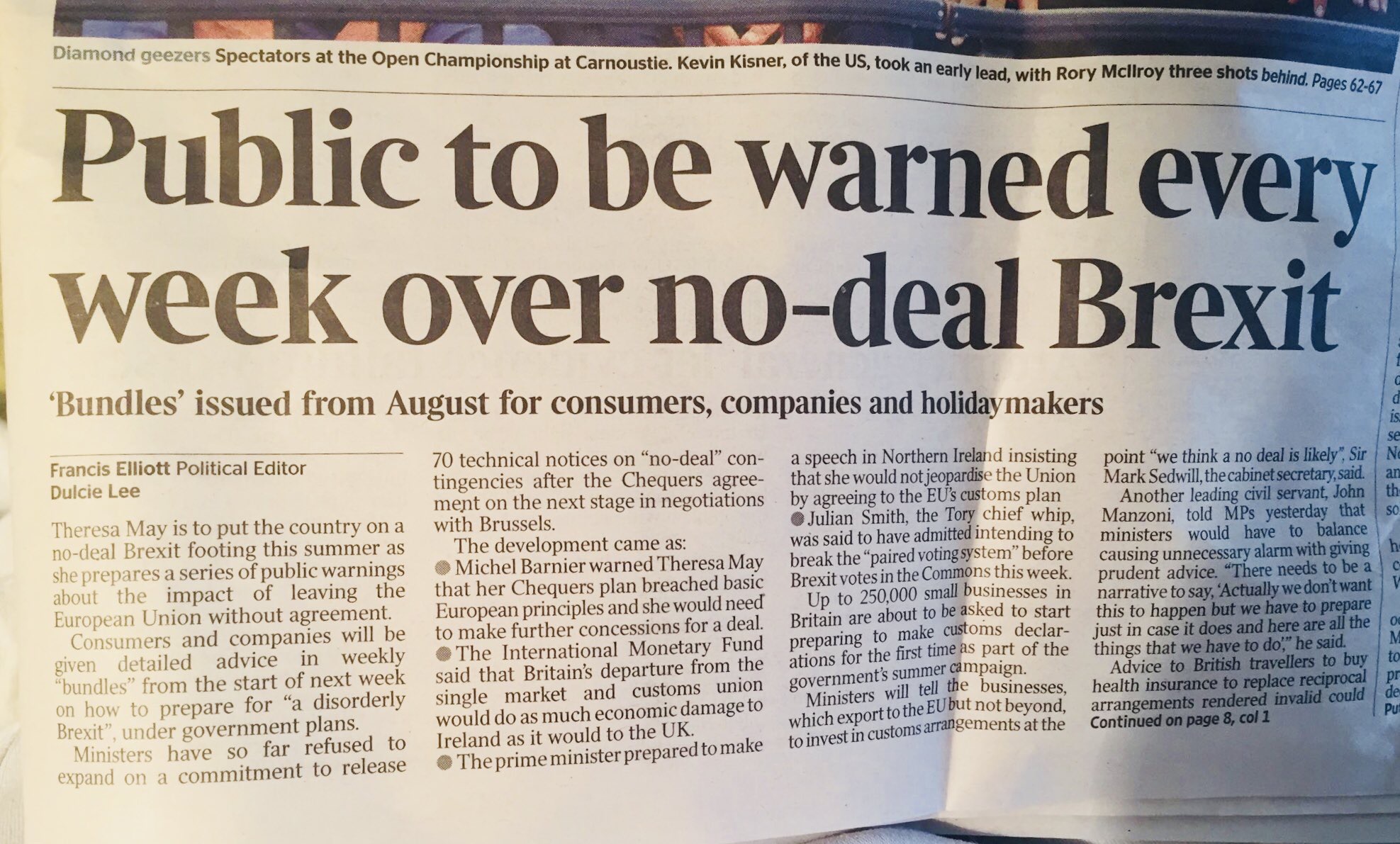 Bollocks. You only ever cite the Daily Mail and Express.

Don Carlo said:
You do know that in 20 years time no one will admit to having been a remainer!
Click to expand...

Wanna bet , we'll be more popular than the Maquis. Bigger too.

I voted to leave, by the way.

This is just a bleeding game. It's not as if one word posted here will ever make an iota of difference. We really a boring bunch of cnuts.

Anyone fancy a game of Brag> Straight cards, no wilds. Max of three rounds blind. No covering the pot.

That's probably one of the considerable upsides we hear so little of
And despite us holding all the the cards on the easiest deal in history.

Dearie me. How to piss off the punters.... by rubbing their noses in your sh!t?
M

PhotEx said:
Did you actually read what you posted?

Ireland’s cunning plan is to offer an even longer route to Yourup And undercut the closer country with a tunnel and a couple of dozen short sea crossings?
Click to expand...

I don't know how you think the tunnel and ferries are relevant. I'm not sure there's many land at LHR then choose to travel to Dover to reach the continent.

Any increased time is marginal over a long haul journey once transfer times are taken into account. If it's cheaper (and open skies largely drove the budget airlines' success) people will accept an extra hour. In any case for American flights it's on the way.

One_of_the_strange said:
You're a prisoner of your inflexible mindset. .
Click to expand...

Baglock said:
We'll never get anything better
Click to expand...

I may be starting to feel sorry for you. Your present life is as good as you've had?
Poor little SCOTY
CENT 05ZR70.Last seen at Marchwood, (by Nobby) Heading for Israel.
You may, if you wish, call me Jerry. Archduke Charles said it is my name. I dunno, I think he's a twat.

SkippedOnce said:
Which makes life interesting (for all parties) when trying to cobble together a 'borderless border' agreement!
Click to expand...

They (the EU) could always use the results of the study that they commissioned rather than the NI stays in backstop...

Baglock said:
Nah, like the brexiteers will be largely gone in 20 or so years...

You are only making a c**t of yourself on the internet.

SkippedOnce said:
As you seem to have the stats to hand; what were the number of eligible voters who could not be arrsed to participate in the referendum ballot?
Click to expand...

*As in, the total number of people registered/eligible to vote (if they could be bothered).

Definition of "voter". Someone who votes. Not someone who might have voted if they were not washing their hair.

chillsjag said:
Is that the UK Automotive industry comprising of Nissan and Toyota who have already threatened to move to the EU from the UK on Brexit?

Or the Tata owned JLR that gets a large amount of it's parts from European companies?

Looks to me like this EU-Japan deal will render the UK superfluous for Japan after Brexit. I think you will find a lot of industries inthe same boat.

Done come out with all the crap that the UK is the world's 5th largest economy that was before the Brexit referendum. Since them the UK has slipped and with major industries like Airbus, Niussan, Toyota and others Brexiting the UK will be hard pressed to stay 10th.

Say goodby to being on the G7/8 and having bugger all influence inthe G20 as we have no friends to get together with.

That is why I don’t usually bother engaging with your oft repeated bluster. Read my post again carefully Einstein. I was referring to the large market HERE to sell into .the one that is important enough that when BMW sounded off a couple of weeks ago at the appointed time on Blair and co’s play sheet.
There was a hastily published retraction within 48 hours when I assume the marketing department pointed out how much damage they would do to BMW’s carefully crafted image and therefore future sales.
Fighting for a bigger share of the market here has nothing to do with the rest of your oft repeated assertions.

GrumpyWasTooCheerful said:
Dearie me. How to piss off the punters.... by rubbing their noses in your sh!t?
Click to expand...

It'd be embarrassing if they delivered the wrong editions to the wrong regions .

Thanks for that eloquent and witty riposte to a reasonable question, reasonably answered by others.

'Profanity is the effort of a feeble brain to express itself forcibly.' - Spencer W. Kimball

"Those who can make you believe absurdities can make you commit atrocities." - Voltaire
“Nobody's slave, nobody's tyrant” - Generallöjtnant Jakob Albrekt von Lantingshausen
"Only the dead have seen the end of war" - Plato